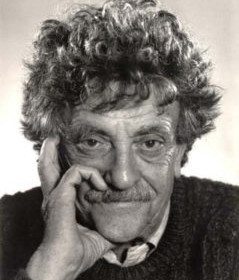 In 1973, Indiana University awarded Kurt Vonnegut Jr. an honorary doctorate in Humane Letters. Two years earlier, he had finally earned his master’s in Anthropology from the University of Chicago more than two decades after the faculty rejected his first thesis. They didn’t have a change of heart about the work he’d done as a graduate student; instead, they accepted his 1963 novel Cat’s Cradle as an alternative thesis. The belated degree suggested that his fiction had contributed more to the study of humanity and our social customs than his youthful scholarship had. If you care to weigh the wisdom of this decision, you can find early drafts of the novel and copies of his rejected thesis in the Lilly Library’s archive. There you’ll also find Vonnegut family photos, original drawings from Breakfast of Champions, and the rulebook for a board game he invented but failed to sell. You can see these and other pieces of Vonnegut paraphernalia at the library’s new exhibit, Random Acts of Granfalloonery: The Art and Fiction of Kurt Vonnegut, Jr.

Read the full article, along with a complete schedule of Granfalloon events, in the current issue of The Ryder. Pick up a copy at one of 250 locally owned shops and restaurants or on the IU campus.