A Tale Of Two Brothers 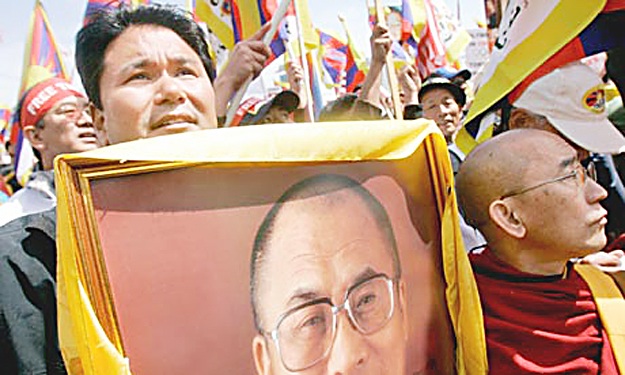 When the Buddha Came to Bloomington ◆ by Filiz Cicek

Jigme Norbu walked alone along the edge of the Florida highway. It was a dark night and the white line along the road was his only means of navigation. Jigme had already logged 7,800 miles to free Tibet from Chinese occupation. His father, Thubten Jigme Norbu, the elder brother of the 14th Dalai Lama, had initiated these Independence Walks across America for peace and freedom. Thubten Norbu (Left) With His Brother, The Dalai Lama

It had been a long day in the hot Florida sun. But in a few minutes Jigme would arrive at his rendezvous point, where he would meet his traveling companions.

There were no streetlights and the little natural light that filtered down from the moon and stars was obscured by trees that lined the side of the road. Consequently the driver of the dark grey Kia could not see Jigme; he was pronounced dead at the scene at 7:30 p.m. on February 14th, 2011. He was 45 years old.

In 1949, Jigme’s father, Rinpoche Thubten Jigme Norbu, had been courted by the Chinese government to convince his brother, the14th Dalai Lama, to welcome the Chinese army into Tibet. If his younger brother could not be persuaded, he was told, more drastic methods would have to be considered. Pretending to comply, Norbu visited his brother as the Chinese asked, but only to warn him about their plans to assassinate him.

Norbu decided to flee and left Tibet in 1950. He traveled to the US with the help of the Church World Service and the CIA. His brother would later follow suit and leave Tibet in 1959 to Dharamsala, India, where he teaches and governs to this day.

From the moment  Norbu left Tibet, he became a “freedom fighter,” as his son Kunga puts it. First, however, Norbu had to learn English.  At a formal event a waiter in a tuxedo imitated a chicken for him in an effort to describe what would be served for dinner. Norbu then wrote the words “roasted chicken” on a scrap of paper and would present it in restaurants when ordering.  “He ate roasted chicken for a very long time,” notes Kunga, until he bettered his English skills. Eventually he would be fluent in six languages, teaching as a professor at Indiana University.

While in New York he held odd jobs to make ends meet. One of these was at Macy’s at Herald Square. He greeted customers as they came in, directing them to appropriate departments such as ladies undergarments or menswear. Later as a curator of Tibetan artifacts at the Museum of Natural History, he was able to travel around the world and raise awareness about the situation in Tibet.

When she left Tibet, Jigme’s mother, Kunyang, was eight years old. She was 16 when she arrived in the States. Her youngest son Jigme was one month old when she traveled to Bloomington, together with two older sons and her husband to make her future home in the cornfields. Had the baby been born earlier, the family would have settled in Geneva, Switzerland. “He wouldn’t pop out,” she says laughing. Mrs. Norbu (Center) Arrives In The US

Mrs. Norbu would take up her husband’s cause, doing her part to fight for the Independent Tibet behind the scenes.  “You would never see me quoted in the newspapers. I never gave interviews then.”

Once in Bloomington Professor Norbu established the Tibetan Studies program, what was then known as Uralic Altaic Studies at Indiana University. After the Canada family, heirs to Eli Lilly, donated land, Norbu and his family went to work and together they started the Tibetan Cultural Center (TCC) in 1979, currently the Tibetan Mongolian Buddhist Cultural Center (TMBCC).

“He had spent all his energy and all our little livelihood there, to preserve the Tibetan culture,”  Mrs. Norbu recounted. They planted trees, and slowly began to shape what today is the TMBCC. Kunga took up the responsibility of mowing the grass, which would take a few days given the size of the land.

The first Stupa was built as a memorial to the Tibetans who died during the uprising against the Chinese Occupation. It was the first of its kind in North America and later duplicated throughout the world. It is a very involved process, says Mrs. Norbu. It entails many rituals, precisely placed sacred relics, and hundreds of mantras. “We xeroxed thousands and thousands of pages of Tibetan books and transcripts,” Mrs. Norbu explains, which were then placed inside the dome. Also included in the dome were “the hair pieces, of all the Dalai Lamas, starting with the first Dalai Lama all the way to the 14th Dalai Lama…, “My father put them in there,” explains Kunga,  “as well as the ashes of my grandmother.”

Now sitting at Turkuaz Café on Third Street, one of Kunga’s and his brother Jigme’s favorite places to eat, Mrs. Norbu and her son remember those days fondly—how they planted each tree and transported water in milk cartons to water them. Later someone donated a little money, and a water line was installed. “We were so excited!” notes Mrs. Norbu. Then the buildings and temples were built with the help of volunteers and more donations. The Kumbum Chamtse Ling Temple as well as the Center was intended mainly for His Holiness to have his private headquarters. “My husband had seen His Holiness travel all the time and stay in hotels and surrounded by many people, so he said ‘why don’t we build this little building, so he can come sometimes when he is traveling, quietly he can come and spend two or three days of relaxation, that was his aim.”

The Dalai Lama has visited Bloomington six times, most recently in 2010 to pay respects to his late brother, who passed away in 2008. During an earlier visit the Dalai Lama saw his brother alive for the last time, and “it was a special moment” says Mrs. Norbu. “I brought him in a wheel chair and the two of them put their foreheads together, staying in that position and in silence for a long time, finally tears streaming from the  His Holiness’ face, my husband was also crying. It was amazing how they communicated, not verbally.” Afterwards the Dalai Lama would send Para Rinpoche to stay with his brother until he died eight months later. After her husband’s death Mrs. Norbu left the TMBCC and moved to Seattle, where members of her family still lived. Meanwhile the Dalai Lama had appointed a new administrator, Arjia Rinpoche.

“We all feel good that we have all done our part; our only hope is that Arjia Rinpoche is doing things to preserve the Tibetan culture,” says Mrs. Norbu. “We also have to remember who started the Center,” adds Kunga, “and that everything that my father had started and done out there has to be preserved.”

Though she has been invited, Mrs. Norbu has not been back to the Center since she left Bloomington. “Too many memories…, when I am stronger, I will go back and check how things are going.  My hope is that Arjia Rinpoche will continue what my husband has built. An extra fancy looking little thing is not important to me, the important thing is to give the message out about what is happening in Tibet. It is all related to Mongolia now, I don’t know why. Did you see that there are no Tibetans out there?” The Center was renamed in 2007 after Arjia Rinpoche’s arrival (he is a Tibetan of Mongolian decent), to reflect the commitment to Mongolian representation. In an article in Bloom magazine in November 2012, Rinpoche said one of the missions of the TMBCC is to establish an interfaith program open to all, including local Mongolians because they “have nowhere to go.” The increase in Mongolian presence might have caused local Tibetans to attend religious services and cultural events at the Indiana Buddhist Center in Indianapolis instead.

In 1995, Norbu co-founded the International Tibet Independence Movement in a further effort to free Tibet from the Chinese occupation. The Dalai Lama, however, chose a different path: the “middle way” approach, which aims to achieve peace through non-violence, mutual benefit, unity of nationalities, and social stability. The 14th Dalai Lama opposes policies and sanctions that might harm the average Chinese citizen. He is also concerned for the safety of Tibetans in Tibet, Mrs. Norbu says; he doesn’t want to say or do anything that might make life harder for them than it already is. “I respect him,” she adds, “but at the same time it is up to people like us to speak up for the Tibetans back home. People in Tibet have to burn themselves in order to be visible, to be heard.”

Since the middle way approach is also an important philosophical teaching in Buddhism, I ask if, as the religious figure of Tibetan Buddhism, the Dalai Lama is trying to practice what he preaches? Moreover, as a self-proclaimed simple monk, perhaps it would be difficult for him to take a more aggressive stand against China.

“Yes, it is hard to be a religious person and the political leader at the same time, it doesn’t work and that is why he had resigned as the head of the Tibetan government,” responds Mrs. Norbu. “My husband and I were very free to speak but when you are working for the exile government you have to be careful. I think what His Holiness doesn’t realize is that the ones in Tibet are dependent on people like us. They [the two brothers] had a different approach to handling the Chinese occupation but they loved and respected each other.”

The first Independence Walk took place in 1995; Norbu walked from Bloomington to Indianapolis together with two other supporters. That was followed by a 300 mile walk from the Chinese Embassy in Washington DC, to the United Nations headquarters in New York. “He felt obligated to people back home to do something, and he never changed his goal,” explains Mrs. Norbu. Previously he had worked with the CIA to further the Tibetan cause, to recruit and train Khampa fighters, from the toughest Tibetan tribe to be infiltrated into the borderlands of China. According to the 2008 obituary in The Guardian “Norbu’s name appears in reports of secret training camps in the Colorado Rockies and on the Pacific island of Saipan.” In the end the US covert operations were unsuccessful and came to a halt in 1970s with Richard Nixon’s new China policy which sought to better relations between US and China. Determined nevertheless to fight for Free Tibet, Norbu did one last walk from Toronto to New York; he was then in his 70s. When he fell ill, his youngest son took up the cause and began to carry the torch until he was struck by a car in Florida.  On March 23rd his widow, Yaling, is holding a fundraiser for the Ambassador of Peace organization, which had helped sponsor Jigme’s Independence Walks, at Café Django on March 23rd in her husband’s honor to raise money to fund the future freedom walks for Tibet. Jigme Norbu And His Father, Thubten

Mrs. Norbu is somewhat hopeful that as the old generation of leaders die off and the new generation of Chinese travel abroad and access free information about Tibet, the situation might change. Kunga remains cautious however, “nothing much has changed in 50 years; we watched a government drive a tank against its own citizens at Tiananmen Square.”

Others now follow in Norbu and Jigme’s footsteps, taking part in Independence Walks across the country. While Kunga walks for freedom, Mrs. Norbu will travel back to Seattle to raise funds for Tibetan refugees.

“We are the voice of Tibet outside of Tibet.” says Mrs. Norbu, “Perhaps someday my grandchildren will take up the cause like their father and grandfather. Who knows?”