Hale County This Morning, This Evening 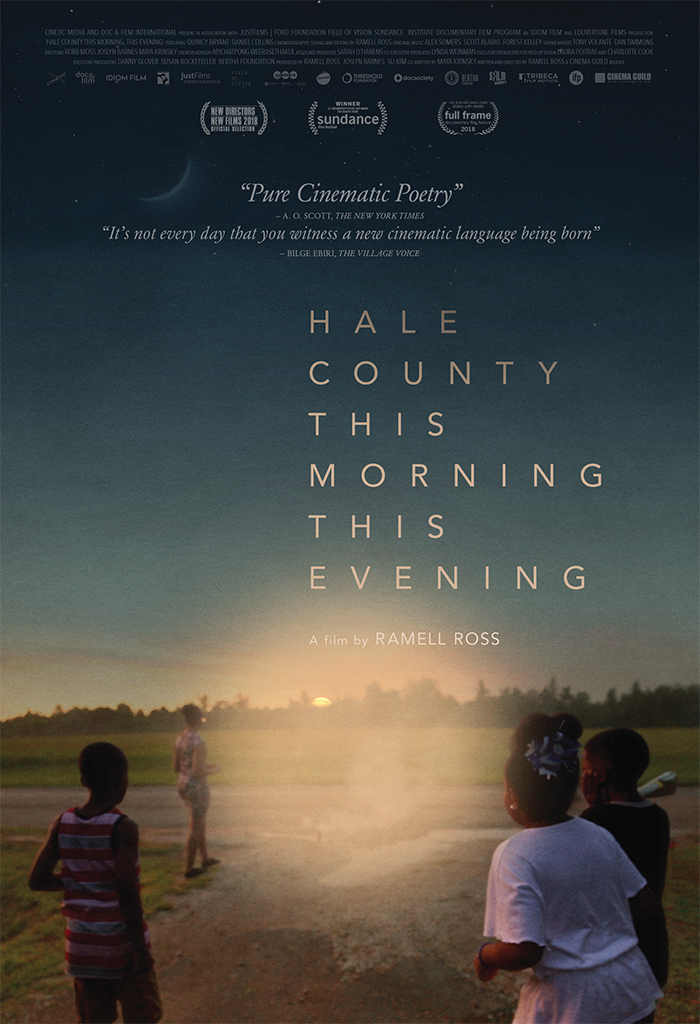 An inspired and intimate portrait of a place and its people, Hale County This Morning, This Evening looks at the lives of Daniel Collins and Quincy Bryant, two young African American men from rural Hale County, Alabama, over the course of five years. (Hale County, Ala., is where Walker Evans documented in photographs the lives of white sharecroppers in the Depression era; Evans, with the writer James Agee, created the extraordinary book Let Us Now Praise Famous Men.

Collins attends college in search of opportunity while Bryant becomes a father to an energetic son in an open-ended, poetic form that privileges the patiently observed interstices of their lives. The audience is invited to experience the mundane and monumental, birth and death, the quotidian and the sublime. These moments combine to communicate the region’s deep culture and provide glimpses of the complex ways the African American community’s collective image is integrated into America’s visual imagination.

This is the first feature film by RaMell Ross, who took a circuitous route to filmmaking. When his career as a professional athlete flamed out due to injuries (he attended Georgetown on basketball scholarship), Ross turned his attention to English literature and politics (after college he worked as a special assistant to U.S. Deputy Secretary of State Richard Armitage in Colin Powell’s office). Along the way he took photos, and one day, they were spotted by ESPN. “‘You have a good eye,’” Ross remembers them saying, “and from there I started obsessing about photography. I started doing large-format work, and my career took off.”

Ross began making “short films for fun” while managing a youth program in Alabama, and it was there he met Daniel and Quincy, the two young men he followed for Hale County.  His days as a basketball player have influenced his films: “I played point guard,” he says, “so I’ve always looked at things in terms of movement and their relationship to what came before and after.”

There is something visionary in this film. -The Guardian

Critic’s Pick! The filmmaker’s poetic logic is inextricable from his consciousness of race and community, and of his function and potential as an artist grappling with his own circumstances and those of the people he’s depicting. “Hale County This Morning, This Evening” is not a long film, but it contains whole worlds. -The New York Times