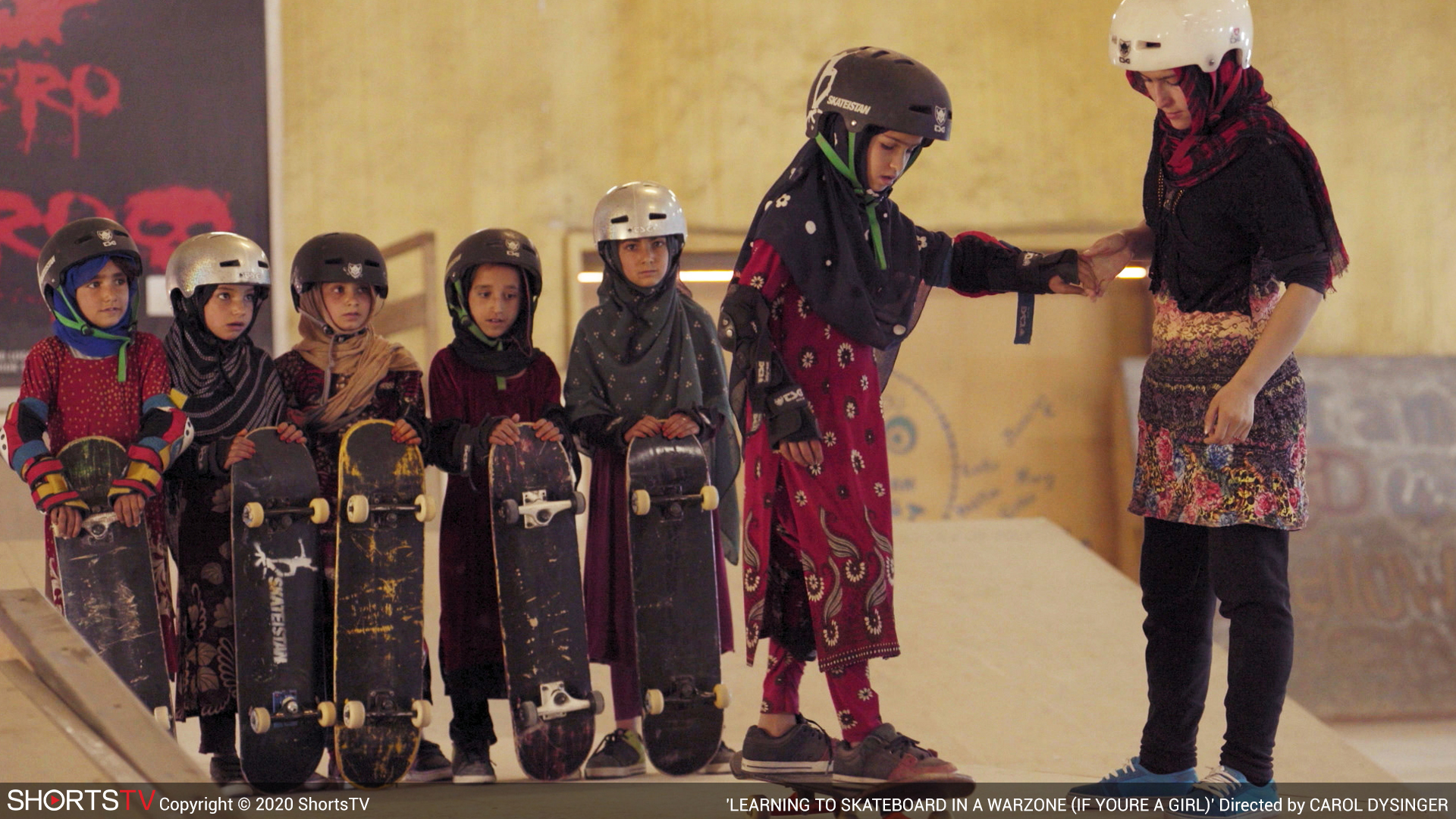 Five of the bravest international filmmakers working today tell thoughtful, compelling stories in this year’s documentary short film program. This year’s slate of nominees runs three hours and will be presented in two programs with a brief intermission. One ticket admits you into both programs and you can see the films on two different nights.

Learning to Skateboard in a Warzone (if You’re a Girl) : In Afghanistan, many young girls are not able to participate in sports. Cultural and religious norms, along with other factors such as safety concerns and years of warfare, have resulted in limited athletic and recreational opportunities for women and girls, especially those who come from impoverished neighborhoods. But a new generation of Afghan girls are learning to read, write — and skateboard — in Kabul. Over the course of the school year, the girls grow and become empowered through the joy of skateboarding and the warmth and inspiration of the women who teach them. (Dir. by Carol Dysinger, 2019, UK, in Dari with English subtitles 39 mins., Not Rated)

Life Overtakes Me: Something peculiar is going on in Sweden, a strange phenomenon affecting children that has defied explanation by doctors and psychiatrists. In recent years hundreds of kids around the Scandinavian country have slipped into a mysterious, coma-like state lasting many months or more—transformed from bright, active youngsters into limp creatures in need of round-the-clock care. Identifying the cause has proven elusive (Dir. John Haptas and Kristine Samuelson, 2019, Sweden/USA, in English, 39 mins., Not Rated)

In the Absence: When the passenger ferry MV Sewol sank off the coast of South Korea in 2014, over three hundred people lost their lives, most of them schoolchildren. Years later, the victims’ families and survivors are still demanding justice from national authorities. (Dir. by Yi Seung-Jun, 2018, South Korea, in Korean with English subtitles, 28 mins., Not Rated)

St. Louis Superman:  A Black battle rapper with face tattoos, was an unlikely candidate for political office in a state where a majority of lawmakers are white and Republican. But activist Bruce Franks Jr. has been elected to the Missouri House of Representatives, and seems to be making a real difference in his community. (Dir. by Smriti Mundhra and Sami Khan, 2019, USA, 28 mins., Not Rated)

Walk Run Cha-Cha:  Paul and Millie Cao lost their youth to the aftermath of the Vietnam War.  Forty years later, they have become successful professionals in Southern California – and are rediscovering themselves on the dance floor. “Today I can use my body to reach another level of freedom,” says Paul. (Dir. by Laura Nix, 2019, USA, 21 mins., Not Rated)