Your ticket purchase includes live performances before and after screenings, so come early and stay late.

We are screening 3 films at the Buskirk-Chumley Theater: Arsenic and Old Lace, The Exorcist and The Wailing. Frank Capra’s Halloween comedy Arsenic and Old Lace stars Cary Grant as a man learns that his eccentric but sweet aunts have been seeking out lonely, elderly men, poisoning them, and burying them in the basement.  Controversial from the day it opened in 1973, The Exorcist is now recognized as a defining classic of the genre. Our third film, The Wailing, is a 2016 release. A foreigner’s mysterious appearance in a quiet, rural village causes suspicion among the locals in The Wailing. Released in June of this year, The Wailing  has garnered enthusiastic reviews  on the film festival circuit and is currently the highest rated film on Rotten Tomatoes. You can read more detailed descriptions of these below.

The Halloween Fest will also include spine-tingling live performances in between films by James Dorr and by  Cricket’s Bone Caravan, so come early and stay late.

Wait- there’s a fourth film. On Sunday, October 30th we will screen the 1958 classic, Horror of Dracula, at Bear’s Place.  If you purchase a movie pass for the films at the BCT on Oct 23rd, you can use it for Horror of Dracula as well. Here’s our schedule:

Directed by Frank Capra and based on the hit Broadway play by Joseph Kesserling, Arsenic and Old Lace is one of the most beloved and popular comedies from Hollywood’s Golden Era….On his wedding day (which also happens to be Halloween) a man learns that his eccentric but sweet aunts have been seeking out lonely, elderly men, poisoning them, and burying them in the basement.  Cary Grant stars; Jean Adair and Josephine Hull play Grant’s loveable aunts, reprising their roles from the Broadw

ay play. in interviews Capra talked about his desire to make a film that was just funny, without the social commentary of films like Mr. Smith and Mr Deeds. And while Arsenic and Old Lace is first and foremost very funny (and on occasion a bit frightening); it also functions as a grotesque vision of the American family, sharing many similarities with the macabre humor of cartoonist Charles Addams. Capra shot the movie in 1941 but it was not released until late 1944 because of a clause in the film rights contract stipulating it could not open while the hit play was still running. The screenplay is written by twin brothers Julius and Philip Epstein; Julius’ grandson, Theo, is the General Manager of the Chicago Cubs. Look closely at the tombstones in the cemetery scene and you’ll spot one bearing the name “Archie Leach,” Cary Grant’s real name.

Directed by William Friedkin, The Exorcist  might be the most influential post World War II  American horror film and defined the genre for a generation of filmmakers. A 12 year old girl becomes possessed by a malevolent spirit, and her only hope is an exorcism. Linda Blair, Ellen Burstyn and Max Von Sydow star. The Exorcist received 10 Academy Award nominations, winning two. We are screening the even scarier Director’s Cut. 1973 / 2 hrs, 12 min

A foreigner’s mysterious appearance in a quiet, rural village causes suspicion among the locals – suspicion which quickly turns to hysteria as the townspeople begin killing each other for seemingly no reason. As the investigating officer watches his daughter fall under the same savage spell, he agrees to consult a shaman for answers – unknowingly escalating the situation into something far more dangerous. 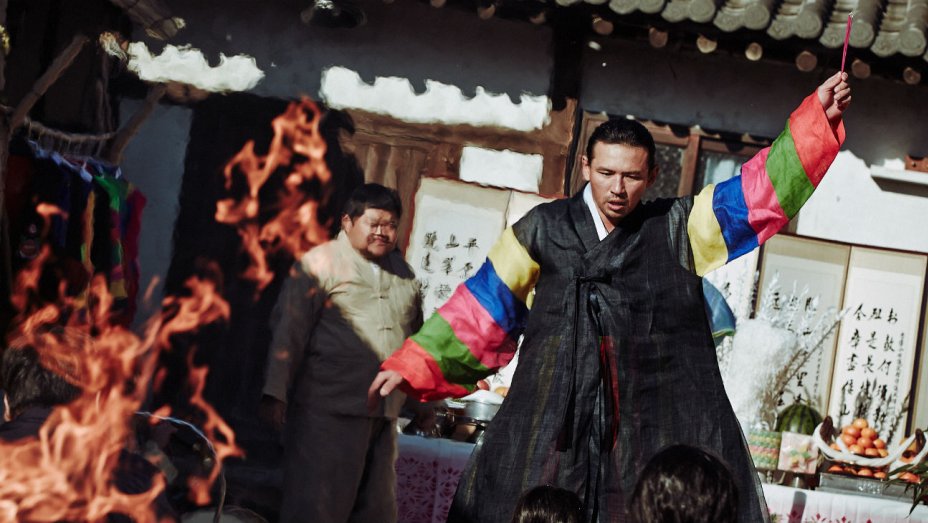 The Wailing is a murder mystery, a zombie movie, a tale of demonic possession and a parable of bad parenting gone wrong. At times outrageously funny, it’s a moral and/or narrative puzzler that will keep you guessing days or weeks later.  2016 / 2 hrs, 36 min

Forget “Captain America”: this stunning Korean thriller is the summer’s FIRST GREAT MOVIE. Part murder mystery, part zombie apocalypse, The Wailing is a breakthrough. Unless you’re the kind of person who follows film-festival news and East Asian genre cinema, you’ve probably never heard of Na Hong-jin, who wrote and directed this movie. He has made other TERRIFIC movies in a more familiar action-adventure vein, including “The Chaser” and “The Yellow Sea.” But nothing quite like The Wailing, because THERE IS NOTHING QUITE LIKE THE WAILING.  A whole lot of people will hear about him now. –Salon.com

James Dorr’s THE TEARS OF ISIS was a 2014 Bram Stoker Award® nominee for Superior Achievement in a Fiction Collection.  Other books include STRANGE MISTRESSES: TALES OF WONDER AND ROMANCE, DARKER LOVES: TALES OF MYSTERY AND REGRET, and his all-poetry VAMPS (A RETROSPECTIVE).  An Active Member of the Horror Writers Association and the Science Fiction and Fantasy Writers of America with more than 500 individual appearances from ALFRED HITCHCOCK’S MYSTERY MAGAZINE to YELLOW BAT REVIEW, for the latest information Dorr invites readers to visit his blog at http://jamesdorrwriter.wordpress.com.

He will be reading a selection from his newest book, TOMBS:  A CHRONICLE OF LATTER-DAY TIMES OF EARTH, a novel-in-stories scheduled for release by Elder Signs Press in spring-summer 2017.  Set on a far-future dying Earth in and around a vast necropolis known as the “Tombs,” “Raising the Dead” is about a young woman who seeks to restore the soul of her newly deceased husband to his body; a tale of necromancy, dark fantasy, airships, and doomed love.

The Cricket’s Bone Caravan audio troupe created the radio series Anthology on WFIU and Books Unbound on WFHB. They will conduct a multimedia rendition of In the Company of Wolves combining music, video and excerpts from the screenplay.