After All These Years: Gaga for the Gizmos 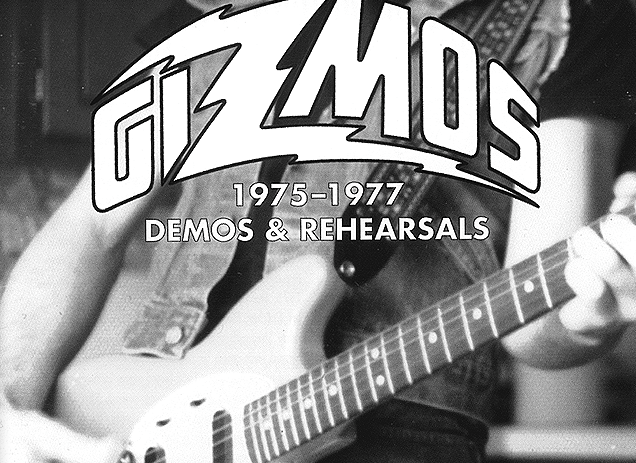 Not everybody makes a gold record, but the Gizmos did. Oh sure, it took them more than 30 years to get their 500,000 sales but that makes it even cooler. How punk rock is that?

Now maybe you’ve heard of the Gizmos, maybe you haven’t. But here’s what you need to know: They were over the top, they rocked it out, and they were the first punk rock band to put out a record in Indiana.

It’s been almost four decades since they left their mark — or at least a stain — on the musical world but on Thursday, June 12th, at the Bishop the original Gizmos will reunite. Or perhaps more accurately, a reasonable facsimile will assemble — after all, the Gizmos made their first record with an eight person line up and naturally not everyone can make it.

But the mainstays of the group will be there, starting with the duo front men of Ken Highland and Ted Niemac, and the spiritual mentor Eddie Flowers, along with whiz-kid guitarist Ken Coffee, all four playing together for the first time since their infamous recording session way back in May, 1976. As for the elusive, reclusive others lurking in the background, who knows? But a Bloomington All Star music crew has been recruited for the rhythm section, consisting of local legends Ian Brewer and the Mad Monk known as JT, along with newbie Max Demata (more on him later).

The nitty gritty details are all in their CD liner notes about how a motley crew of fanzine writers (kids, it was kind of like writing a blog but using Xerox machines; ask your grandparents) converged on Bloomington in the mid-seventies, united in their love of rock’n’roll. This would be Ken and future Gulcher label owner Bob Richert, with occasional visits by Eddie Flowers.

After a few songs were written by aspiring rockers Ken and Eddie, Rich Coffee’s band Cerberus provided the bulk of the instrumentalists, but there was one more piece of the puzzle left to be added. Let Ken Highland fill us in: “Bob Richert worked at WIUS where he had met Ted Niemac, and they had free tickets to the Tubes. After the concert they came over to the apartment and we jammed to Kiss songs. But when Ted opened his mouth and sang, he sounded just like Lou Reed, only singing Deuce! Bob said, “I think you guys just formed a band. Let’s call it the Gizmos!”

A single ten hour recording session was hastily put together at Rich Fish’s aptly named Homegrown Studios, with a smattering of chaotic rehearsals happening beforehand. Guitars were plugged straight into the board instead of miking amps, and a direct live stereo mix was created for the master tapes, mostly because nobody in the band had any studio experience or knew any alternatives.

Kirk Ross (now with the Carolina Mercury Dispatch) was the engineer for that session. “It was a very strange session. We were all packed into a back bedroom of a duplex on Smith Road. I had to sit on the floor to engineer. The session started slowly. I remember John Mellencamp — he was Johnny Cougar then — coming by and showing them a song. The session built as it went on and had some pretty good energy by the end. They got quite goofy at times, mostly sugar highs. I was a pretty wild kid then, but they were a whole different level of wild. They made me feel normal.”

Putting out a fanzine was one thing, but putting out a record in 1976 was another, and it took a determined mind to make it happen. Bob Richert had that mind, starting Gulcher Records for the express purpose of pressing, releasing, and promoting the Gizmos’ recordings. After a lengthy break, it’s going strong today and while it’s a stretch to say it was the start of the DIY punk movement, it was the first example of the DIY punk movement, at least in Indiana, and thus an idea ahead of its time. Recordings are great, but of course it’s the music and the songs that matter, and here the Gizmos had an awful lot of inspiration going for them. The first extended player (or EP — it was the size of a 45 single but with four songs) featured a sensational, smutty pop punk classic Muff Diving (In The Wilkie South), that lyrically was not only entertaining, but educational too, with a whale of a guitar riff to propel it into the stratosphere.

That’s Cool (I Respect You More) has many tough-but-tender fans as well. “I was a pen pal with a girl in Jersey,” Ken explains “and she invited me down for a visit. I’m sixteen, you know how it is. We were listening to Grand Funk Railroad and making out, when I asked if she wanted to go all the way. She said no, and my mom always told me, “Ken, you must respect the ladies,” so I said, “That’s cool, I respect you more,” because I did. Later I wrote the song when I was working at my high school as a janitor. Like Kurt Cobain did.”

Rounding out the vinyl was a nifty tribute to Dick Clark and American Bandstand delivered in Mean Screen delivered by the irrespirable Eddie Flowers. The fourth song, Chicken Queen, is really beyond description. That’s on you to listen to. God help you.

So they pressed a thousand copies of the first “modern,” post-Stooges, Indiana punk rock record, and sent them out, and guess what — it was a hit. An underground sensation, as it were. It got rave reviews, hit #8 on the UK Alternative Chart, the cards and letters poured in, and the original pressing sold out. Another thousand were pressed (only 498,000 to go). “We felt that our music was entertaining and necessary. However we didn’t know that anybody else was ready for it and were a little surprised to see how enthusiastically it was received,” remembers Ted.

There was a clamor to see this strange and naughty group of guys, who actually had never played a live show, and they obliged, doing a set at the Monroe County Municipal Library in 1977 that was many years later released on the Gulcher label. Ken Highland had to endure the nascent punk rock explosion while wearing a US Marine uniform (“A big mistake,” is how he calls his enlistment today), but made it back to Bloomington for the show and a quick return to the recording studio for the second EP.

A young Johnny Cougar Mellencamp introduced them that night, and in a slightly bizarre turn of events, had even written a song for them called Boring Part 1. The Gizmos recorded it, with the Coug sitting in on guitar and singing background vocals, but they didn’t release it until many, many moons later. Ted says, “The track would’ve come out better, if we had spent more time going through it before the record button was pressed.”

Two more records were pressed, but sales didn’t match the first one, although there was strong material in those grooves. By 1978 the band would start to morph into the uber-talented Dale Lawrence era, which highlighted a more efficient and less chaotic approach to making this punk rock thing happen.

Gulcher Records expanded as well, releasing a chockful of records and samplers by local bands. But by 1982 it was all over. The Gizmos left for New York and changed their name. Gulcher Records moved on as well.

But they cast a long shadow that has allowed much marvelous original, hardcore, and experimental music to flourish right here in our hometown. This writer first saw them in that evolutionary year of 1978, which provided quite the adrenaline rush, and started my own band within the year. I quickly bought, or at least obtained, copies of all four eps and enthusiastically studied their self-referential lyrical style (Ballad of the Gizmos) and their muscular guitar riffing, and even dug their tongue-in-cheek advertising.

Their initiative in writing, recording and releasing their own material set a powerful example that many followed throughout the eighties and today’s local music scene owes much, both directly and indirectly, to those eight musical nabobs and the record label that grew in their wake.

And so the Gizmo’s legacy never really died. The interest continued through the years, and the first Gizmos EP remained a strong collector’s item. And lo and behold the internet mushroom clouded into existence. Collector interest surged, eBay sales were impressive, phone calls and emails were made, and in 2000 Gulcher Records revived, debuting with (what else?) a Gizmos compilation, 1976/1977: The Studio Recordings, which featured the first three EPs, unreleased tracks, and alternate takes. This is the material that the group will play at the Bishop. Several Gulcher releases were licensed to an obscure Italian punk rock label that had a name that rhymed — Vulture Records. And an Italian luminary named Max Demata, who is good friends with the owner of Vulture Records, ended up at IU in Bloomington this year. It is through his efforts, his coercion, and his bass playing, that the Gizmos have been cajoled into doing the Bishop gig, which you can rest assured will be an out and out blast and, to quote the godfather of punk rock, Iggy Pop, a real cool time.

And 38 years later, when all the vinyl, discs and downloads are counted, the first Gizmos release is an official gold record and recognition for their music is due. “It fills a unique spot. Maybe a G-spot. That’s G for Gizmo!” is how Ted sums it up. “It’s the first time I’ve gone on tour!” adds Ken. So congratulations are in order. And I know just the time and place to give them.