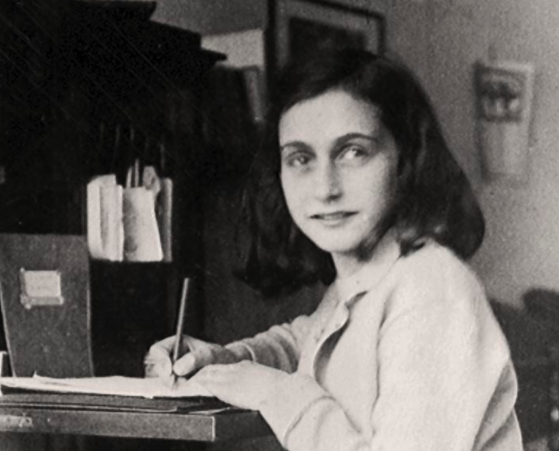 The Bloomington Chamber Singers’ production of Annelies is neither a simplistic swing through the musical genres nor a stylistic romp like the Beatles’ White Album, but rather a representation of the whole musical culture of Anne Frank’s Europe.

Our news abounds with examples of ways we humans harm each other: a contractor murdered in his isolated house, drive-by shootings, trivial religious conflicts that would seem just silly if people were not killing each other over them, political ambitions that become world-wide massacres. But as appalling as these seem, there is something bizarrely comforting in the pure irrationality of most of this mayhem. All of us have at one time or other been angry or fearful, then lashed out. Certainly, most of us stop well short of murder, but ultimately we’re on the same scale.

By contrast, consider the Third Reich. The expansionist desire to recover territory, wealth, and influence lost in the aftermath of World War I and the disasters of the Weimar Republic are understandable (and currently visible with Vladimir Putin, determined to re-establish the Great Russian Empire, Cossacks and all).

But the coldly deliberate and systematic madness of the Third Reich is an enterprise of a far more chilling sort. The motivating force may have been the paranoid and narcissistic schizophrenic called Adolf Hitler, but the final cause was the fertile German oil in which he and his collaborators planted their ideas. As John Cornwell shows in his splendid Hitler’s Scientists: Science, War, and the Devil’s Pact (2004), the roots of Hitler’s racial “science” well precede Hitler’s rise to power. Yet this is the same culture that gave us Goethe and Kant, von Humboldt and Bethe, Bach and Brahms.

The mind—and more importantly, the heart–struggles to balance these wrenching contradictions and its obsessive thoroughness, detailed records included. Ghoulish or not, collecting gold-filled teeth is one thing, but seven tons of human hair?

It is this incomprehensible, contradictory world that swallowed Annelies Marie Frank. A fairly ordinary girl, turning into what may well have become a fairly ordinary woman, we are familiar with her in a casual way, but her ordinariness may keep us from confronting the conflicting horrors she and 11 million dead others suffered. If we have trouble getting our minds around the motivations leading to the vast expenditure of time and wealth dedicated so insanely to the Final Solution, how much more incomprehensible must it have been to those enduring it?

James Whitbourn’s Annelies is a profoundly moving meditation on the conundrum that Anne Frank’s final two years represents. The libretto by Melanie Challenger is based predominately on Anne’s famous diary entries, with a few appropriate additions from other sources, including the Psalms. Mostly they occur in their chronological order, so we see how Anne changes during her isolation as the war progresses. Whitbourn does not attempt to explicate these appalling circumstances; they may have to remain incomprehensible. Instead, his approach is phenomenological, as he lays them out much as young Anne experienced them, “in the blue sky, surrounded by black clouds.”

Annelies is a subtle and sophisticated work, yet it is marvelously accessible. A close analysis of Whitbourn’s compositional techniques would take many pages, yet those techniques never call attention to themselves. His musical approach is frankly comprehensive, showing us how deeply a part of European life Anne and the rest were. The material may be “Jewish,” but the emotional and moral force is deeply universal, presented in a variety of musical forms including folk song, chant (reflecting the traditions of both Christian plainsong and Jewish cantilation), popular entertainment, and militant marches. But this is neither a simplistic swing through the musical genres nor a stylistic romp like the Beatles’ White Album, but a representation of the whole musical culture of Anne’s Europe.

The work is fundamentally poetic, as he compresses time and concentrates emotion. A cheery music hall ditty relating how “one looks out of the window, and gazes at the endlessly amusing people” (29 September 1942) abruptly becomes “children … in thin shirts .. gnawing on a carrot to still their hunger” three months later, then in another three months, “One day … we’ll be people again, and not just Jews.”

His approach to the material is compassionate and thoughtful, but totally without rancor or stridency. In some true sense he does not take sides, since the enormity of the bare facts speak for themselves. Anne herself goes from telling her diary in the first entry “I hope that I can trust you … since memories mean more to me than dresses,” to the final, affirmative “when I look at the sky. I feel that everything will change for the better.”

The work is scored for chorus, soprano solo, clarinet, and piano trio. The Chamber Singers under Dr. Gerry Sousa need no introduction to Bloomington audiences, and they have never sounded better. The soprano soloist will be Elizabeth Toy, who also soloed with the BCS in Respighi’s Laud to the Nativity last December. Although still young, she has already amassed a impressive musical biography and is an ideal choice for the part, close enough in age to Anne herself to be comforting, yet with a mature and rich lyrical voice beautifully suited to the material.

[The performance will be given twice in Bloomington at The Warehouse, 1525 S. Rogers, on Saturday, April 12 (7:30) and Sunday, April 1 (3:00). Tickets are available at the Buskirk-Chumley box office and on line or from BCS members.]