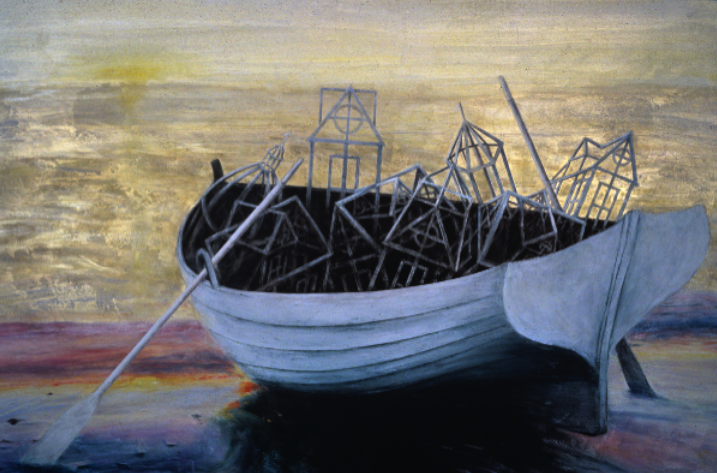 [Editor’s Note: Almost Illuminated: Edward Bernstein is a retrospective exhibition of work created during Professor Bernstein’s tenure at Indiana University from 1991—2013. The exhibition will be on display in the IU Grunwald Gallery from January 17 through February 14. On January 17, The Henry Radford Hope School of Fine Arts will host a Gallery Talk at 5:30; reception follows.]

Ed Bernstein’s visual universe is not for the faint of heart. It is a place of barely contained elemental energy, where flames consume, waters engulf, earthquakes shatter, and avenging angels hover in the air. In this world, frail boats drift through dark seas, fragile chandeliers shed feeble light into the shadows that deepen around them, and buildings await imminent destruction by fire or flood. This is a universe where forces both natural and supernatural make mockery of whatever humans have wrought in the name of power, culture, civilization, religion, beauty.

Yet however grave the danger and however imminent the disaster, Bernstein never relinquishes the hope of some ultimate redemption: for every raging fire or wrathful tempest, there is also light struggling through the darkness. To express such large themes— both timeless and deeply romantic—Bernstein uses and re-uses an array of seemingly simple yet richly connotative visual metaphors closely bound up in our own domestic and imaginative lives: the burning house, the storm-tossed boat, the beacon of hope, the guardian angel. Ed Bernstein is a native New Yorker who has hardly lived in New York. He was born in NYC and grew up in Long Island until he left for college first in Ohio where he got a degree in Political Science from Miami University and then to Rhode Island School of Design for a BFA in painting.

He left Rhode Island in late 1967 for Rome and then Paris to work with SW Hayter at Atelier 17 and where he met Wendy, his wife now of 44 years. He returned briefly to New York in late ’68 to teach art in the South Bronx ghetto as alternative service to Vietnam and then back to Rhode Island 1969 to do the same in inner city Providence.

Ed and Wendy arrived in Bloomington first in 1970; Ed studied with Rudy Pozzatti and Marvin Lowe for his MFA in Printmaking. In 1973 Ed got his first teaching job at the University of Arkansas in Fayetteville where their daughter Sacha was born but soon left for Oxford, England where Ed became Head of Printmaking at the Ruskin School of Fine Art at Oxford.

From 1978 when they returned to the US, the Bernsteins moved many times across the US including Berkeley as well as back to Oxford for his many temporary and various gigs until finally returning to Bloomington in 1991 as Associate Professor in printmaking in the Hope School of Art. Bernstein just retired in August as Professor of Art and Head of Printmaking.

Over the course of his career, Bernstein has cycled through successive themes and variations on those potent—and often portentous— symbols. In the 1991 Escape Hatch and Stormy Voyage and other works of that time, we see an iconic house form, of the sort that very young children so often draw, the peaked roof and centered door promising security, warmth, family, refuge from the world outside. But Bernstein’s houses promise no such thing. They are skeletons, stripped to studs and joists. Dense plumes of smoke and licks of fire stream upward through the bare rafters. Standing precariously on circular mirrored platforms atop teetering conical towers, these houses remind us of spinning tops, cyclones, or whirlpools. At their bases and all around seethe restless waters, surging, heaving, undulating, powerful enough to suck the whole jerry-rigged structure down beneath the waves. If this happens, the flames will be doused. But the house is doomed to destruction either way. It is not symbolism alone that conveys the drama and emotion we feel in these images. Those properties also are communicated through chiaroscuro effects and violent gestural animation. In Stormy Voyage, for example, everything is intensely dark save the flames, which, by contrast, deliver the blinding visual shock of a lightning flash. In the flames and—even more—in the roiling waves, our eyes “feel” the artist’s hand, activating the surface with a riot of marks that coil, surge, dash, flare, and bristle. Light, shade, and drawing combine to create effects of sheer chaotic, boundless motion. It is almost as if we are given a glimpse of untamable forces lurking beneath the ordered and ostensibly well-regulated façade that civilization has built to contain them. Indeed, the rectilinear geometry of the house and the perfect symmetry of its conical base stand as emblems of human-engineered order and measure. But in the Voyage series, geometrical order seems powerless to withstand the primal energy of nature and entropy: the epic of making and unmaking unfolds before our eyes. Permanence is only a dream, turmoil the reality.

Some prints, though, revel in the sheer joy of light. Constellation VII (2004) is another close-up view, a dazzling tangle of looped bead chains, dangling prisms, swooping arms, and crystalline candle cups, every element sparkling in tints of icy blue. In Mutations (2006), the peachy tones and extreme close-up accomplish what the title suggests: the chandelier has morphed into an alien life form—part plant, part animal—with bulbous growths on its legs and a glowing, translucent heart. In Illuminata (2012), we zoom out a vast distance to see an infinity of chandeliers and candle flames. Duplicated many times over, they become a spangled galaxy of stars shimmering against a velvety dark ground—or, perhaps, fireflies dancing in the dark on a summer night.

Light and the metaphors it generates are intrinsic to our existence. Light gives life. When we learn the truth, we say we have seen the light; we are enlightened. To be enchanted is to be bedazzled. That special person lights up our life. We hold candlelight vigils in memory of those who have died. Our ancestors relied on the light of their campfires to keep the wild beasts at bay. And almost without exception, our religions use light as a metaphor for the unknowable. Rich in connotation, these images invite us to reflect, ruminate, and remember.

Bernstein’s chandeliers dangle in space; his angels swoop through it. The artist first conceived of moving his printmaking into three dimensions in conjunction with a group show at the airport in Richmond, Virginia, where some sixty-five artists were invited to design a three-dimensional paper airplane on the theme of “No Danger.” What better than an angel to symbolize the transcendence (rather than the inconvenience, fear, and discomfort) of flying? Printed on fabric, Bernstein’s Guardian Angel (2008) joined the many other flying objects—identified and otherwise—watching over passengers coming and going. But this was no sentimentalized, smiling angel with white wings, a long robe, and a halo, but, rather, one straight out of the biblical imagination, a six-winged seraph, wondrous and (despite the theme of the show) more than a little terrifying. With its vividly colored wings inset with eyes, its projectile body and baleful stare, it is a genuinely supernatural being, celestial, inhuman, a hybrid of bird, butterfly, and spirit, a creature from a vision or a dream. Its siblings—Nemesis (2010) and the Avenging Angel (2008)—are equally formidable and even forbidding, one in somber shades of purple and violet, the other azure blue, trailing a long stinger. One can easily imagine vengeance and doom riding on those wings.

The three-dimensional figure of Icarus (2009) is structurally similar to the angels but of a different stripe. More like a giant moth than a seraph, Icarus is a creature of the earth whose dream of flying symbolizes his hubris and spells his downfall. The paired prints, Icarus Ascending (2010) and Icarus Ascended (2011) elaborate on what the three-dimensional Icarus more subtly suggests. To symbolize Icarus and his doomed attempt to soar, Bernstein marries a pair of bird wings with one of Leonardo’s impossible flying machines. In the first scene, Icarus has flapped his way out of a hellish pit (courtesy of Breughel the Elder) where the fallen rebel angels, hideous monsters, battle their heavenly adversaries. But in Icarus Ascended, the wings now bear the imprint of Breughel’s hell and the figure of the Archangel Michael beating down the monsters with his sword. Rather than rise into the firmament, Icarus seems to have plunged into an infernal night to become one with the demons he (like so many of us) tried so hard to escape. But at least for a few inspired moments, he tasted freedom. Was it worth the price? It is up to us to decide.

Bernstein’s latest work is decidedly more down to earth. These recent prints and constructions came out of the artist’s two extended visits to the city of Belo Horizonte, Brazil. These pieces graphically symbolize the extreme divisions of class and power endemic to modern Brazil. Inhotim (2011) represents a lush grove of palm trees in the eponymous park outside Belo Horizonte and mostly frequented by the middle and upper classes. The mesh of red chain link fence that screens the entire surface conveys meaning in an elegant visual shorthand that needs no further translation. Chain link is also the armature for the far more intricate 2013 Tapecaria (Tapestry). Resembling a quilt at a distance, close up it resolves into an interwoven grid of diamonds, some printed with smiling faces and ramshackle dwellings from the slums, the rest with images of Inhotim’s inaccessible palms. This dizzying visual kaleidoscope is at once a heartbreaking landscape of inequality, an acerbic commentary on social justice, and a tribute to the citizens of the favelas, who despite hardship and discrimination have created a vibrant culture.

As these latest works show, Ed Bernstein continues to invent, evolve, and engage with enduring social, ethical, and political issues, as he has throughout a long and productive career. He continues to experiment, too: for all his meticulous craftsmanship and command of traditional printmaking techniques, he strives to push beyond those boundaries, incorporating novel technologies with the old to produce ever new expressive forms. Like the best artists, he embraces change. The great Japanese printmaker Katsushika Hokusai styled himself “The Old Man Mad about Art” and dreamed of the work he would create at age eighty, ninety, one hundred, one hundred and thirty, forty, and beyond. Ed Bernstein is an artist in that identical mold. Like Hokusai, he will keep going, always looking ahead, following his star.

[Sarah Burns is the Ruth N. Halls Professor Emerita in the Department of the History of Art at IU. The featured image is Imminent Departure, 1995.]