Falling In Love, With Panache 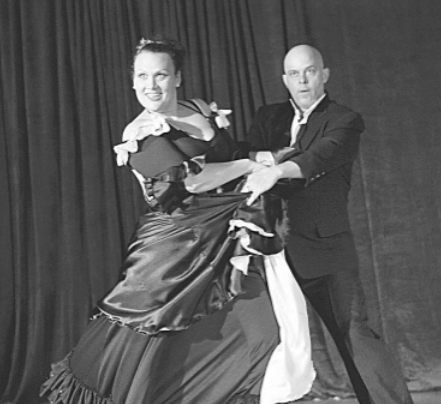 He was 16, and he got hooked on the hustle. After watching John Travolta’s gyrations, Tom danced his own first dance, and will never forget his intro to dance: that first Latin hustle class, that fake ID, that first trip to a nightclub in Boston to try out his new moves.

Today, Tom is a World Exhibition Champion with a host of dancing, teaching and judging credits to his name; he’s toured cross-country and internationally, appeared in national commercials, and coached movie stars. Now, he spends much of his time at the dance studio he’s been with since the doors opened: Panache Dance.

Age 16 is considered a late entry into the art – but one of the key messages at Panache is that it’s never too late to learn to dance – and that anyone can dance.

And no one knows that better than Scott and Sandy. The two were in their mid-twenties when they discovered dance, after attending a free dance lesson in Fort Wayne. They fell in love with dance, and when they moved to Bloomington, they sought out a similar studio but had trouble finding one. They spent hours driving back to Fort Wayne and to Indianapolis to keep up their dance chops. They realized there was a need for an inclusive, fun dance studio in Bloomington and decided to build one.

That was five years ago. Today, Panache Dance Studio is home to over a dozen series dance classes and dance fitness classes every week. It is a place for people to lose their dance virginity, or deepen existing relationships with movement to music.

From the Pulitzer to Paris

“It was 2010, and I was on sabbatical from IU and working very hard on a book on analogies. I started attending group classes in Cuban salsa twice a week at ‘Paris Mambo’…I loved salsa music and the astounding sensual grace of it, but I was a total beginner and, I must say, a rather slow learner. But I stuck with it and hung in there and in those eight months I learned quite a bit,” said Doug, the  Pulitzer-prize winning author of Gödel, Escher, Bach: an Eternal Golden Braid (GEB), renowned academic in the world of cognitive science, and Distinguished Professor of Cognitive Science at Indiana University.

But even Pulitzer Prize winners have their fears. Before he discovered the Parisian dance studio, Doug described the idea of dancing as terrifying. “I can’t say exactly why, but watching good dancers made me feel both very inferior and very jealous. Graceful dancing is just so beautiful and so natural that seeing people who could do it well always used to make me feel as if I was missing out on the true secret of what life is all about, and that sense of profound loss was a horrible, gut-wrenching feeling.”

“The aching yearning that I felt to be able to do that kind of thing myself is almost indescribable. In Paris, though, I finally screwed up my courage and bit the bullet. I took the first steps toward changing that sad frame of mind.”

When Doug returned from Paris, he felt he had to continue his salsa lessons, and found two excellent possibilities – Ritmos Latinos on campus, and Panache Dance.  At Ritmos, Doug continued Cuban salsa, while at Panache he started learning LA-style salsa with Sandy, and cha-cha with Tom. “Both my Ritmos and Panache classes were inspiring to me and wound up having lasting impacts on my life, especially the classes at Panache.”

Lasting impact for Doug came in the form of Baofen Lin, a woman in Tom Slater’s cha-cha class.

“I had a crush on her from the very first time I spied her – but I didn’t know her name or a thing about her. Luckily, in Tom’s class, we had to rotate partners every few minutes, so I got to dance with this mysterious Chinese beauty every so often…I was a bit unsure of myself, so when we danced – and I was holding her in my arms! – we hardly exchanged any words at all. And it didn’t hurt that she was also one of the best dancers in the class, so that I had not just one, but two reasons for looking forward to her coming around to me every 20 minutes or so.”

One evening after Tom’s class Doug and Baofen began talking about their mutual interest in foreign languages, and walked down to Subway for tea and discussed having a ‘language exchange’ – what Doug says was, “A thinly-veiled way of saying, ‘Let’s get to know each other.’” A few days later, they had a real date at the Runcible Spoon, and soon “one thing led to another.”

Baofen and Doug were married on September 1st, 2012, at Deer Park Manor. To start the evening’s festivities, the couple performed an elaborate dance routine, beginning with the cha-cha (of course), then moving into a lively Cuban salsa “rueda”, a circle made up of the bride, groom and five other couples (including Sandy and Scott) in which everyone constantly changes partners. “That evening, was amazing for me – not only getting married to someone terrific, but also dancing up a storm, doing cha-cha and salsa and swing and a bit of rumba and fox trot,” remembers Doug. “I was nothing like the toe-tied teen-ager I’d been in Geneva, nothing like the guy who for so many decades was terrified to death of dancing of any sort at all. It was like I was a completely reborn person! What a revolution in my life!”

The Myers’ quickly discovered another need they could fill – dancing for fitness. The term ‘dance fitness’ includes a variety of styles – from hip hop to Zumba to Bollywood. Panache instructors are also known to take two styles and meld them together, creating unique dance fusions that are both fun and challenging for students.

One instructor, Darrelyn Valdez, has created several new dance classes. “That’s one aspect that I love about Panache. Sandy and Scott allow us to be as creative as we want. We have done some crazy fusion stuff!”

Darrelyn has been a driving force behind creating a class called Triple Threat, which gives several teachers the chance to lead dance numbers. At least four or five teachers lead songs in the 50-minute class, and as many as nine teachers have participated.

Besides Triple Threat, Darrelyn teaches Bollywood classes at Panache, and other dance fitness classes for IU, Monroe County Community School Corporation, and St. Marks Church, for a total of about 15 classes per week – all while juggling being a mom and working for MCCSC.

“I truly believe in everybody moving – that’s what’s important. It doesn’t matter what they do, as long as they’re moving. It’s about having fun and not worrying about whether you’re getting it right or not.”

A dance studio for the rest of us.

The fear of ‘getting it right’ is what holds many people back from walking into a dance studio, a worry that Donna Macri Stevens understands well. Mix in a busy schedule – Donna is Director of HR at IU’s School of Education and a mom – and it’s a small miracle Donna and her husband Phil made it to Panache. “I had wanted to take lessons for years, but couldn’t seem to find time for lessons in our busy schedules. Plus, all kinds of fears jumped to the surface – would we make fools of ourselves? Would we meet anyone our own age? Would it be all work and no play? Would people laugh at us as we stepped on one another’s toes?”

Donna and Phil were thrilled to discover their fears were unfounded. “The instructors helped us feel comfortable from day one, and all our fears melted away as we learned new moves and began to dance! Dancing at Panache was fun, and we found ourselves both comforted by others who were also just learning, and inspired by those who had been taking lessons for longer. Both groups of dancers, as well as the instructors, helped us to know that we had nothing to fear and inspired us to want to learn more…we’ve now made time for dance every week since.”

Donna and her husband Phil have taken classes in waltz, foxtrot, tango, rumba, mambo, salsa, East and West Coast swing, and the hustle. Like Doug, Donna also feels that she has found deep personal relationships at this little dance studio: “Through our lessons at Panache, we’ve developed lasting friendships with a wide variety of people, and we now have a fun and healthy hobby that brings us closer together and gets us out and about a bit more with a new group of friends. Panache is not only a dance and fitness studio – it’s also a family.” This family is made up of all genders, sizes, and sexuality. Many same-sex couples have come to Panache because of its welcoming reputation.

“Bloomington offers lots of opportunities to be a passive participant in the arts scene….you can go to the opera, take in a show, attend a gallery opening or hear a local singer songwriter perform. But there are few opportunities for the rest of us to be a more active participant in the arts scene,” Donna pointed out. “Dance is one way that each of us can actively participate, and it’s something that is accessible to people of all ages, from the very young to the very old. Panache helps provide a way to bring more people into the world of social dancing, making dancing a possibility for us all.”

Whether falling in love with the beautiful woman whose name you don’t yet know, or falling in love with your husband all over again after thirty years together, the power of dance is immense. Most of us remember our first time dancing – whether feeling a hot, sweaty post-dance buzz or gazing into your partner’s eyes, we experience dance in our muscles, in our bones, and in our souls. And here in Bloomington, Scott and Sandy Myers have created a safe haven for anyone wanting to be more physical, meet new people, hear new music, or maybe – just maybe – fall in love, one dance step at a time.

[Author’s Note: This month, Panache Dance Studio celebrates its fifth anniversary. As she looks to the future, co-owner Sandy Myers plans to continue creating an all-inclusive yet family-like feeling at Panache, while bringing in new clients: “I want to include more people in our community. I want more people to know what we’re about and come try it out. We are always growing, always learning.”] [Editor’s Note: Panache students will show what they have learned at their semi-annual showcase, a weekend of performances that lets Panache dancers of all skill levels share their talents: November 1st and 2nd @ 7:30 pm  $15 adults, $12 students with valid school ID, $8 children 12 and under. Live band and dancing after the Saturday show at Panache Dance Studio, 325 E Winslow Rd.]