FILM: Summer’s Here And The Time Is Right… 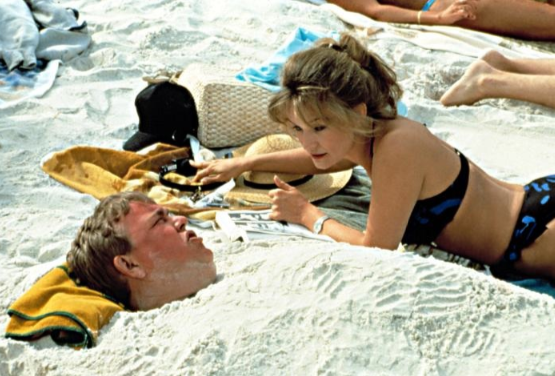 According to Hollywood, the summer movie season has been in full swing since the beginning of May, but by the time July and August roll around, temperatures are sweltering enough that it just doesn’t pay to go outside, even if your destination is an air-conditioned screening room. That’s why, instead of putting yourself at the risk of sunstroke, it’s much better to stay put and watch one (or more) of these summery cinematic treats.

The mid-80s had no shortage of movies about how people chose to spend their summer vacation – or their lack of one as in Carl Reiner’s Summer School. In it, high school gym teacher Mark Harmon’s planned getaway to Hawaii is scuttled when he’s tapped to shepherd a class of misfits through a remedial English class. Helped along by fellow teacher Kirstie Alley (his requisite love interest), Harmon tries his best to engage his inattentive charges, which leads to much high-jinks, including a classroom screening of Tobe Hooper’s The Texas Chain Saw Massacre. Nothing spells “summer” like watching a movie where other people watch a movie. Carl Reiner was also responsible for Summer Rental, in which frazzled air-traffic controller John Candy is given some much-needed time off and uses it to take his family to Florida, where a cascading series of mishaps prevents him from getting much rest and relaxation. His plight does give rise to one of the mainstays of ’80s comedies, though: the montage sequence where everybody pitches in to fix something up. In this case, it’s a boat that Candy needs to get shipshape so he can win a regatta, a plot point that also figures into the Nantucket-set One Crazy Summer. Written and directed by Savage Steve Holland, the auteur behind the ’80s classic Better Off Dead, it’s about a singular season of screwiness during which hapless cartoonist John Cusack and his pals (whose ranks include Bobcat Goldthwait, Curtis Armstrong, and Joel – brother of Bill – Murray) band together to save Demi Moore’s grandfather’s house from being razed by some shady developers. (That’s another trope of ’80s movies that could inspire an article all its own.) If you don’t mind getting a little arty, boating is also central to Ingmar Bergman’s Summer with Monika, which was his first film to make a splash on these shores, largely because its American distributor capitalized on the title character’s fleeting nudity by releasing it under the lurid title Monika, the Story of Bad Girl. Said bad girl is played by Bergman’s muse, Harriet Andersson, who convinces her boyfriend to steal his father’s boat so they can get away from Stockholm for a few months. Andersson returns in Smiles on a Summer Night, which was made two years later and deals with the romantic entanglements of several couples. A classic of world cinema (one of many Bergman would turn out over the course of his career), Smiles later inspired the Stephen Sondheim musical A Little Night Music and Woody Allen’s pastoral A Midsummer Night’s Sex Comedy, which isn’t quite on the same level, but it’s still plenty funny.

A Midsummer Night’s Dream has been brought to the screen on a number of occasions – most notably in a 1935 adaptation with the once-in-a-lifetime cast of James Cagney, Olivia de Havilland and Mickey Rooney (as Puck) and one from 1999 that features Kevin Kline, Christian Bale, Rupert Everett, Michelle Pfeiffer and Sam Rockwell, among others – but if William Shakespeare seems too daunting, you can always give Tennessee Williams a try. First staged in 1958, Suddenly, Last Summer was adapted by Williams and Gore Vidal the following year for Joseph L. Mankiewicz to direct. In the process they had to skirt around some of the issues that the play addressed more directly, but Elizabeth Taylor remains a force of nature as a patient in a mental hospital whose vindictive aunt (Katharine Hepburn, who was nominated alongside Taylor for Best Actress) wants kindly lobotomist Montgomery Clift to go to work on her. Before he can do so, though, he has to get to the bottom of what happened the previous summer, suddenly. Williams’s flair for the psychosexual reared its head again in 1961’s Summer and Smoke, based on his 1948 play. Directed by Peter Glenville, it’s about a wastrel of a bacteriologist (Laurence Harvey) and a repressed preacher’s daughter (Geraldine Page, earning her first of many Best Actress nominations) who live next door to each other in a small Southern town and are about the most incompatible would-be lovers as you could ever imagine. That doesn’t prevent Harvey from trying his best to drag Page down to his level over the course of a particularly sultry summer.

Those who wish to go abroad without actually leaving home would be advised to look up David Lean’s Summertime, which got the director hooked on location shooting. Set in Venice and filmed in glorious Technicolor, it stars Katharine Hepburn as a spinster fulfilling her lifelong dream of visiting that most photogenic of Italian cities. What she doesn’t anticipate is that she’ll fall in love with a handsome Italian in the process. If the Far East is more to your liking, you can visit Tokyo in Yasujiro Ozu’s Early Summer and The End of Summer. In the first, Ozu regular Setsuko Hara plays a young woman who wants a say when her family decides it’s time for her to get married, and in the second, released a decade later, she’s one of the daughters of a widower who takes up with his old mistress. As is Ozu’s practice, both films are punctuated by shots of the Japanese countryside and downtown Tokyo, making them a miniature travelogue.

Doubling back to Europe, why not spend a couple of Summer Hours in the French countryside? In the 2008 film, which comes complete with the Criterion seal of approval, a family that is widely dispersed has to figure out what to do with their estate when matriarch Edith Scob dies. All three of her adult children have their own ideas about what to do with it, but as writer/director Olivier Assayas observes, it is the next generation that will be most keenly affected by their decision.

If beating the heat isn’t high on your agenda, then turn off the air conditioning to get the full effect of the sweltering Summer of Sam. Directed by Spike Lee, whose Do the Right Thing proves that he knows how to evoke a hot summer’s day, the film is set in New York City in the summer of 1977 when the Son of Sam was on the loose and tempers flared across the boards. Of course, if you’d rather not be reminded of real-life horrors, there’s always Red Hook Summer, in which Lee reprised his role from Do the Right Thing. Like Summer of Sam, that one had a hard time finding an audience and divided critics, but perhaps it plays better when people can watch it in the comfort of their own homes. Set on the last day of summer camp in the Catskills, way back in the mists of time (also known as 1981, making it the spiritual successor of the Bill Murray vehicle Meatballs), Wet Hot American Summer was the debut feature of David Wain, who co-wrote it with fellow State alum Michael Showalter and stacked the cast with troupe members Michael Ian Black, Ken Marino and Joe Lo Truglio, plus such ringers as Janeane Garfalo, David Hyde Pierce, Paul Rudd, Bradley Cooper, Amy Poehler and H. Jon Benjamin. It’s only a slight exaggeration to say that if you’ve watched any American comedy film or television series in the past decade, you could have seen (or, in the case of Benjamin, heard) half its cast here first. Few did, though, because Wain’s film received a critical drubbing and at best a token theatrical release in the doldrums of 2001, but in the years since it’s attracted a sizable cult audience. If you’re not yet a part of it, now’s your chance to hop aboard.