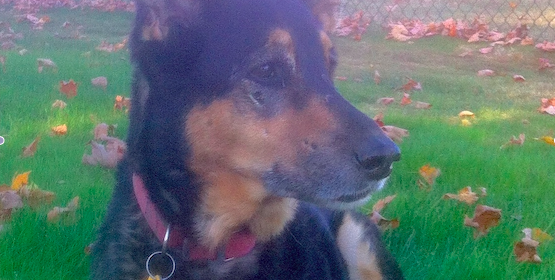 Walking downtown that evening, the man had an uneasy feeling that his grief was manifest, tangible, visible. “Don’t be ridiculous,” he said to himself. Passersby paid him no more or less attention than usual. But all along Kirkwood, dogs recognized his heartbreak the moment he came into view. The Cattle Dog running alongside the cyclist, the Yorkie whining from the backseat of a parked car, the Retriever waiting, patiently, for the young couple in the coffee shop, they had all seen that look before: the look of men without dogs. At home, the woman straightened up the room where the dog spent her final days, and tended to the aging tabby.

The woman met the man’s reluctance with a clear and precise description of the animal. “She’s black and tan, all legs and ears, and she’s got the sweetest heart!” Light rain fell as they took the dog for a walk in the Arboretum. “Just for a test drive,” the woman said. The dog was everything the woman had described: alert, energetic, responsive and, above all, loving. By the time they returned home, the man was convinced. The tabby remained skeptical. (In time the kitty would come to love the dog as well.) That night, they made arrangements to adopt the sweet girl. “Do I know how to pick them or what?” the woman asked.

That morning, the man and woman agreed it was time. They would take the dog to the vet in the afternoon. The man was in the house, busying himself with some dishes in the sink, when he heard ferocious barking in the street. “That’s my girl,” he thought. When he got outside, the woman was chatting with a neighbor out for a stroll with a pair of Huskies. The woman turned to the man and said, “She was lying quietly in the grass. But when those dogs walked by, she came running.” Quiet now, the dog, fragile but vigilant, stood by the woman’s side, even to her last day.

“Coming home is the worst,” said the man behind the counter of the Naughty Dog, a local eatery frequented by the man and the dog. “There’s all that excitement and anticipation … on both sides of the door,” he added. “Now it’s quiet … kind of sad.” He stopped, sighed a little and fell silent. “Going out isn’t much easier,” the other man said. “With my girl, the negotiations would start the minute I put my shoes on,” he said with a grin. “I’d be tying my shoelaces and she’d give me the look: ‘Where we going, pal?’” The man behind the counter smiled. “Then I’d have to break it to her: ‘Stay girl. I’ll be back in a little while.’”

The woman asked if the dog could stay where she was, with the man in the backseat of the car, rather than bring her into the crowded waiting room. The veterinarian obliged and, when he finished his rounds, came out to the car and began his work. A soft rain fell as the man and the woman said their goodbyes. “She has a strong heart,” the vet said. The dog’s breathing slowed, then stopped. On the way home, the man reached his hand back and grabbed hold of the dog’s paw, as he so often did, whether they were driving cross town or cross country. The woman reminded the man of the rain that first day in the Arboretum.

When they first got together, long before the dog was in the picture, the man and the woman took a trip out West. A neighbor would look after the kitty, so the couple was free to enjoy a few days on the coast. One evening, the couple got into an argument, their first. Early the next morning, the man woke from a vivid and disturbing dream. “I was dreaming about the dog I had when I was a kid,” he sobbed. “I’m crying for a dog that’s been dust for twenty years.” The woman took the man in her arms and thought to herself: “He’s a curious article, this dog boy of mine.”

Inside of a Dog It’s Too Hard to Read

In summer, the man and the dog would spend hours in the shade of a sprawling maple tree on Rose Hill. The dog, content with a stick or rubbing her face in the cool grass, waited for the man to take a break from his reading. “Ready?” the man would ask, snapping shut his book. The dog was up in an instant and the two were off to brave the midday sun. As he kept vigil those last days, the man wept occasionally, but laughed just as often, reading passages from The Thurber Carnival and Men, Women & Dogs. Was it coincidence, the man wondered, that so many short stories published in the New Yorker this year featured dogs?

When the man first showed up, the grey tabby gave him the evil eye. It is a story the man and woman never tire of repeating. Eventually, the man won the tabby’s heart. “Much as I adore this puppy,” the woman cautioned, “kitty is the deal breaker. If the kitty won’t tolerate her, we can’t keep the dog.” Once again, the tabby opened wide her heart, and accepted the dog as her “big little sister.” Now the tabby watches from atop the man’s writing desk. The man pets the dog as she sleeps on the pallet they have made up for her on the living room floor. The tabby looks on, and in his grief the man is certain that her heart, too, is breaking.

By Memorial Day, the peonies on Rose Hill are in full bloom. The vibrant display of pinks, reds, purples, and whites announces the arrival of summer. For the dog, however, blooming peonies herald rabbit season. (By one neighbor’s reckoning, she is “the scourge of bunnies on the near west side.”) The dog circles each plant, occasionally standing up on her hind legs – a dance the man and woman inevitably call “the bunny hop” – to get an aerial view of the elusive rabbits. When she sets her sights on one, the dog wags her tail, slowly at first, then furiously as she closes in on her quarry. For a moment she disappears into the peonies, then resurfaces, like ballplayers emerging from the corn in Field of Dreams.

The dog and the tabby are in the kitchen, savoring a meal of chicken and rice the woman has prepared. The sight of it thrills the man. The woman weeps with joy. “It’s the first time the dog has eaten a proper meal in weeks!” she exclaims. “Perhaps,” he says, “we should wait another day or so before we make that decision.” Just then it occurs to the man; they put the dog down a few weeks earlier. There is no bringing her back. The woman nods knowingly, her pain unmistakable and palpable. The man wakes up weeping, grateful for the dog’s visit, anxious to see her again.