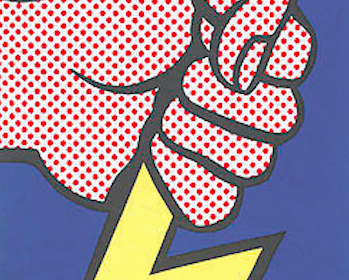 Armed with their resilient images of the modern artist as a brooding, tortured soul, living in poverty and sacrificing everything for the sake of art, Americans of the 1960’s were ill-prepared to imagine the artistic bohemian as a nice Jewish boy from the Upper West Side, a fraternity brother and a tenured professor Yet the pop art movement destroyed such artistic conventions by embracing the humorous and ironic–and Roy Lichtenstein exemplified its new sensibility.

An eight-foot high banner of Lichtenstein’s will be on display at the Indiana University Art Museum from January 27th to May 24th, alongside the work of pop-artists Richard Lindner and Claes Oldenburg, in an exhibition of pop-textiles: a style and a medium not often associated with each other, but representative of pop-arts merging of fine art and industrialized production.

Best known for his early-1960s reproductions of comic panels (Drowned Girl, and  Whaam!, for example), Lichtenstein actually enjoyed a professional career spanning nearly five decades, beginning with abstract expressionism and only later evolving into pop art.  “I don’t have big anxieties.  I wish I did,” said Lichtenstein, “I’d be much more interesting.”  Growing up in an upper-middle-class New York household during the 1920’s and 30’s, his childhood remained relatively untouched by the Great Depression.  He was athletic, a gifted student, and a talented young artist who began his formal art training at age fourteen, in a watercolor class at Parsons School of Design.  Encouraged by his family to pursue art, Lichtenstein enrolled at Ohio State University.  Although the young artist was called to join the army after his third year of school, the war did little to hinder his artistic education.   Lichtenstein worked initially by enlarging cartoons for an American military newspaper and drawing maps for intelligence.  As part of a surge of troops sent to Europe following the Battle of the Bulge, Lichtenstein spent time in England and France: areas that no longer saw much combat but housed many of Europe’s most famous works of art.  After his discharge, he studied briefly in Paris, but soon returned to America to see his dying father and complete his BFA.  In 1948, at his first gallery show in Cleveland, the artist met his future wife, Isabel Wilson.  A year later, the two were married, and Lichtenstein began work as an art instructor.

Working primarily in an expressionist style, Lichtenstein began juggling life as a teacher, husband, and professional artist.  His early work, which had already begun to include the elements of cartoons and advertising that would later become his signature, was dismissed by one Cleveland art critic as “the doodling of a five-year-old.”  Despite, or because of, such mixed responses to his work, the artist’s resolve and prominence grew.  While continuing his career as a professor, Lichtenstein moved with his family (now including two young children) back and forth between New York and New Jersey, chasing jobs and art opportunities.

Lichtenstein’s transformation into one of the fathers of pop art started with one of his children’s picture books.  He created his now iconic painting, Look Mickey! in response to his son’s challenge: “I bet you can’t paint as good as that.”  The resulting cartoon style, with its speech bubbles and Ben-Day dots, helped secure Lichtenstein’s place, after Warhol, as the world’s most recognizable pop artist.

Now reaching middle age, teaching and supporting a family, Lichtenstein found himself on the brink of artistic stardom.  The artist was featured in Time magazine in 1962, alongside fellow pop artists Warhol, Wayne Thiebaud, and James Rosenquist. In 1963, he created his two most famous pieces, and two of the most recognizable works of modern art: Whaam! and Drowning Girl.

While these works reflected Lichtenstein’s naturally humorous, good-natured attitude, life outside of art had begun to collapse.  His wife left him in a messy divorce, taking their children with her.  Life Magazine, paraphrasing an unnamed New York Times critic, asked, “Is he the worst artist in the U.S.?”  While some “critics, museum officials, and collectors find Lichtenstein’s art ‘fascinating,’ ‘forceful,’ ‘starkly beautiful,’” the Life article stated, “others insist that he is no artist at all.”

Although he saw nearly as much rejection in the height of his career as support, Lichtenstein’s role in the history of art had already been sealed.  By 1965, Lichtenstein had ceased to use speech bubbles in his paintings, but his comic enlargements remained by far his best-known and most recognizable works.  In the decades to follow, as Lichtenstein continued to reap the success of his cartoon works, his style continued to evolve.  In the late sixties and seventies he explored sculpture, reproduced his favorite Van Gogh and Picasso paintings, and returned to Time Magazine not as a featured article, but as a cover artist.

As an artist who began as an expressionist in the era of Pollack and Picasso and became one of the fathers of the pop-art movement, the work of Lichtenstein changed considerably during changing times.  The one element that remained constant throughout career was his playful attitude toward his own art.  “I’m not really sure what message my art carries,” Lichtenstein once said, “And I don’t really want it to carry one.  I’m not interested in the subject matter to try to teach society anything, or to try to better our world in any way.”  However, Lichtenstein’s deliberate avoidance of statements and embrace of objects at face value is a statement itself, about the artist, his work, and his life.

“I don’t have big anxieties. I wish I did. I’d be much more interesting.”