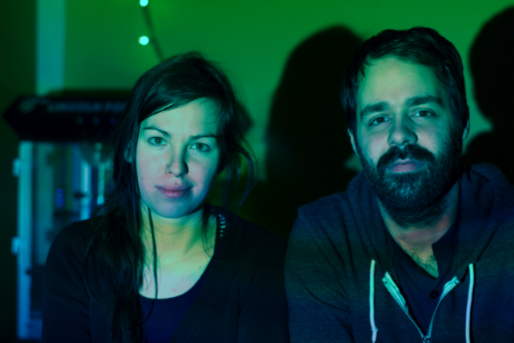 A pair of young lovers are looking up at the sky. Their heads lean together and turn towards the sun. “See those stars?” the man says. “Well, I mean you can’t see the stars. But behind the clouds and far away there’s stars. I’m gonna name one of those stars after you.” She gazes at him adoringly, his words cutting to her very soul.

This is a scene from Eric Ayotte’s short film Crying Out Loud 4 — Official Trailer. Made for his monthly Instant Gratification Movie Challenge, it is a goof on self-serious indie films. Obligatory seriousness is a cardinal sin in Ayotte’s eyes. His two film projects, The Instant Gratification Movie Challenge and The Gadabout Film Festival, work to make the independent film world seem more inviting to would-be filmmakers.

The Instant Gratification Movie Challenge is open to anyone with Ayotte’s email address. Each month a theme is chosen, usually a cliched turn of phrase; Crying Out Loud 4 was made for the prompt “For Crying Out Loud.” People have one month to make a film, up to five minutes in length, based on the prompt. The goal is to get people making films regularly, without feeling pressured to make something exquisitely professional.

The Gadabout Film Festival is an annual program of short films curated by Ayotte. Anyone can submit to the festival. There is no submission fee, and no limit on the numbers of films submitted. Ayotte and his wife, Charlie Jones choose a program that will last 45 minutes to an hour; they tour the country with the films, bringing short films to people who wouldn’t necessarily be interested in a more traditional festival.

[Image at the top of this post: Charlie and Eric.]

“When people think of a short film program, maybe they have the expectation of the pretentious route of a bunch of art school sort of films, which have their own place and validity. But for some people that can be boring. Or maybe it’s not their thing. Or it is their thing, I don’t know. I don’t want to be too negative towards that.

This sort of sentiment is very typical of Ayotte. He is intensely focused on creating space for his style of short film, but at the same time leaving room for everyone else. Coming out of the punk and D.I.Y. (do-it-yourself) music scene, Ayotte sought to create the same culture of support and encouragement around film.

The Gadabout Film Festival was founded in 2002, “mainly as an excuse to travel,” says Ayotte. With only 14 screenings in two months, “it mostly was camping and traveling, and being a tourist at the same time. And eating beans in a can.”

Booking that first tour involved cold calling venues across the country. Ayotte said it was more difficult back then “because the internet wasn’t the internet yet.” He would google (or AltaVista as the case might have been) a town and the words “art council” or “film theater,” hope the phone number was online, then plead his case directly whoever happened to pick up. “Not a lot of people were doing something like [a traveling short film festival], so a lot of people were interested in taking a chance.”

As the years went on, the tour became more organized. “Each year we have more and more venues, and more and more stops and fewer beans from a can.” This year the festival will tour sixty cities in America and Europe. But the festival has yet to lose the sense of irreverence, of silliness, that Ayotte injects into everything he does. He describes first forays into film in high school as “goofing off.” He never thought of film as a potential career. As time went on, however, he found himself spending more and more time goofing off. Eventually he and a friend were accepted to The New York International Independent Film and Video Festival, an experience that left such a bad taste in his mouth it prompted Ayotte to start his own festival. Film-goers at the 2010 Gadabout Festival in Chicago

“We were actually kinda turned off by the whole pretentiousness of the film fest world…There was no sense of community, there was no sense of support or anything. It was the kind of festival where you pay to submit your film, and they keep asking you for more money. Like ‘Hey do you want an image from your film on the cover?’ ‘Do you want a table at the opening gala?’ All these things. I realized how much of a business it was.”

Ayotte says that, even though there were no awards or rankings at that festival, the whole affair felt very competitive. “It was just people passing out their cards. ‘Come see my movie! Come see my movie!'” says Ayotte. It stood in stark contrast to the music scene Ayotte was getting into at the same time. “The other part of my life was being into the D.I.Y. music scene, playing in bands and just seeing that world of inspiration and support and feeling like oh, anyone can play music and go on tour and do these things. And so with film I started thinking of it more like that, like you could make your own films, and you can share them with people, and you can try to support other people that are trying to do the same thing.”

The Gadabout Film Festival has shifted from playing in cinemas and traditional film venues to more unconventional spaces. “We’ve done people’s backyards, we’ve done local parks, we’ve done people’s garages, We’ve done people’s basements. In Hannover, Germany there was this attic of an apartment building that spanned the entire building and was just completely empty. We’ve done screenings in abandoned buildings where people have had access to power outlets somewhere close by, and we were like ‘yeah we’ll do it, see what happens.’ The outside of a school in California — that was technically trespassing.”

Ayotte sees these unique venues as integral to the success of the festival. When they’ve played in cinemas in the past, “people are going to a film venue and they’re seeing films. It’s what they expect. When we set up our own projector and screen in a music venue, or in a garage, or in a field, people leave and you can tell that they’ve experienced something.”

“Oddly enough my favorite compliment that we ever get is ‘I wasn’t expecting it to be good.’ I take that as a large compliment.”

[The 12th Annual Gadabout Film Festival begins on Sunday, April 6th at 8:00 pm at Rhino’s All Ages Club. The theme this year is “Speechless,” movies with little to no dialogue. Submissions are open for the festival until March 23. Submissions for the Instant Gratification Movie Challenge, also titled “Speechless,” are open until April 6th.]