The Not-So-Comic Art Of Chris Ware 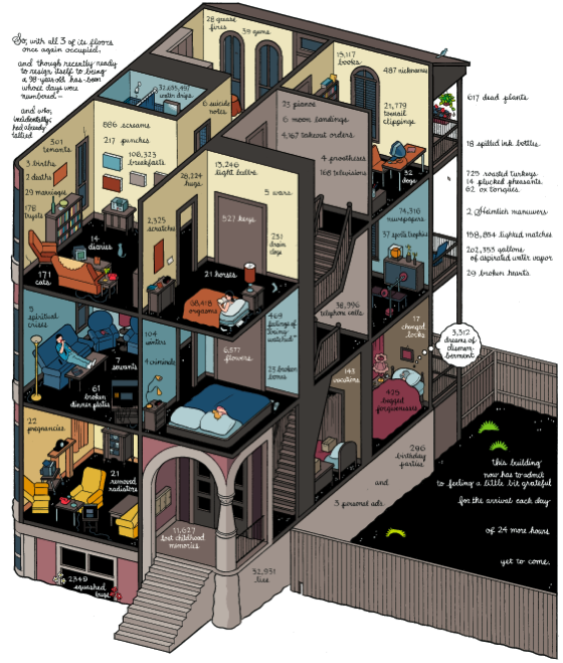 A Master of the Graphic Novel visits Bloomington ◆ by Ivan Kreilkamp

[Graphic novelist Chris Ware gave a public lecture November 12, 2013, at the IU Cinema. His visit was co-sponsored by the College Arts and Humanities Institute, the Ruth N. Halls Fund, and IU’s Themester 2013: Connectedness: Networks in a Complex World.]

Canons are made to be argued about, but the work of Chris Ware would be included in virtually anyone’s list of the most essential modern graphic novels or long-form works of comic art. Ever since Art Spiegelman’s Maus: a Survivor’s Tale won a Pulitzer Prize in 1992, graphic novels have been gradually working their way into broad recognition and respectability, increasingly accepted as potentially as aesthetically complex, emotionally resonant, and culturally significant as novels or films. But the number of true crossover texts in this genre – prize-winning, non-super-hero books of comic art that have been widely reviewed, taught, and read by followers of contemporary literature who don’t identify themselves as comics fans – remains small.  Among the most obvious candidates for such a canon would be Maus and Maus II, Daniel Clowes’ Ghost World (1997), Alan Moore’s From Hell (1999), Marjane Satrapi’s Persepolis (2003), Alison Bechtel’s Fun Home (2006)—and at least two of Chris Ware’s books, Jimmy Corrigan: The Smartest Kid on Earth (2000) and last year’s Building Stories (2012).  Indeed, one could easily make the case that with the one exception of Art Spiegelman himself, who virtually invented the genre and shepherded it into existence, no contemporary comics artist or graphic novelist has achieved greater national and international acclaim than Ware. At a time when graphic novels were still often ignored by the mainstream press, Jimmy Corrigan: The Smartest Kid on Earth became Maus’s first genuine successor in terms of wide acclaim and broad success. It was given “book of the year” distinctions by TIME, The Village Voice Literary Supplement, and Entertainment Weekly, and was also awarded a 2001 Guardian First Book Award and an American Book Award, “distinctions previously awarded,” as Ware puts it in a characteristically ironic author bio, “only to authors who could not draw.”  Comics critic and historian Doug Wolk has described the book as “a history of a family’s pathetic fantasies and painful realities, rendered in a style whose maniacally precise, composed, geometrical frostiness counterbalanced the story’s emotional brutality.” Jimmy Corrigan comes across as some kind of improbable cross between Charles Schulz’s Peanuts cartoons and a work of contemporary fiction of the most austere variety: say, a Thomas Bernhard or Peter Handke novel. If one model for graphic novel cross-over success has been that of gripping memoir or personal history – Maus, Persepolis, and Fun Home all fall into this category, stories of personal-cultural trauma or crisis and breakthrough – Jimmy Corrigan is a much less emotionally accessible narrative.  It tells a complexly interwoven story of two different father-son relationships, each marked by abandonment and regret: in present day Chicago, Jimmy Corrigan, a Charlie Brown (or Bartleby)-ish middle-aged office drudge, and the father he barely knows; and 80 years previously, Jimmy’s grandfather James, and his own father.  Ware describes Jimmy Corrigan in the book’s afterward as his attempt to grapple with his relationship with his own absent father.  After rereading the text for a final edit, he explains, “it occurred to me… that the four or five hours it took to read is almost exactly the total time I ever spent with my father, either in person or on the telephone.”  He also observes that the book itself turned out to be about the same size as the urn in which his father’s ashes were interred.

So Jimmy Corrigan is, in effect, a tombstone for Ware’s own father. Yet for all its bleakness, the book somehow also manages to be altogether pleasurable to read and a delight to look at, in part because Ware is such an exquisitely skillful and dedicated visual artist and craftsman whose work cites a dizzying array of 20th century graphic conventions from magazine and comic book advertisements, children’s books, and any number of additional forms of paper and print ephemera.  Following the success of Jimmy Corrigan, Ware’s work was included in the 2002 Whitney Biennial of American Art, and he is deeply respected by comic geeks for his skills in the lettering, coloring, and fanatically-obsessive production of his books.

Last year Ware topped his own success with Building Stories, a still-more original creation that was named by Time, Newsday, and the New York Times as one of its ten best books of the year. Building Stories is in some ways less a book than a slightly mad assemblage that can simultaneously bring to mind artist Joseph Cornell’s famous surrealist boxes, and a container for treasures stored under the bed of a pack-rat 11-year-old boy.  Building Stories comes in (and also is) a sturdy, approximately 16” by 12” box that is itself elaborately inscribed, and which contains fourteen distinct mini-books and other items: a fold-out newspaper, a thick cardboard game board, several comic books of various sizes, a mock children’s “Little Golden Book,” several posters and broadsides, etc., each designed and constructed with unbelievable care.  These 14 items, which can be read in any order, don’t narrate a single coherent story, although they do, in aggregate, offer a multifaceted examination of the lives led by a number of inhabitants of a single apartment building in Chicago (including one lascivious bee), with a particular focus on an unnamed young female protagonist.  This woman, a former art student with a prosthetic leg whom we see pass through a lonely early adulthood and young motherhood, is this book’s version of Jimmy Corrigan, a partial proxy for the artist himself.

Building Stories has qualities that invite comparison to contemporary post-modern, hyper-textual fictions.  It is non-linear, fragmented, a collection more than a narrative.  Yet is other ways, it is thoroughly and even perversely old-fashioned and backward-looking: it weighs a ton, would almost need to be its own carry-on item for a plane trip, and is unimaginable as an e-book (or even as a paperback). It clarifies Chris Ware’s status as one of the most original and compelling contemporary artists and authors in any genre.

Ivan Kreilkamp is an Associate Professor in the Department of English at Indiana University.