To Surly With Love 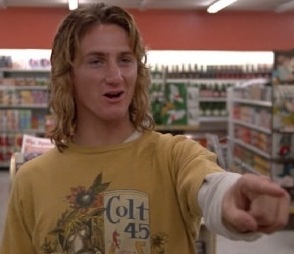 The high school experience as refracted through the lens of ’80s comedies ◆ by Craig J. Clark

“Believe it or not, there’s life after high school.” So sang Daryl Hall and John Oates in their 1983 hit Adult Education, but it’s a message that may be cold comfort to anyone preparing to hit the books for another term. For the rest of us, all we have to do is look at the high school comedies that flourished during the ’80s to remember what it was like to be the brain, the athlete, the basket case, the princess, the criminal, or whatever combination thereof that we were.

A good place to start, naturally, is with the work of former National Lampoon scribe-turned-writer/director John Hughes, who spent the mid-’80s cataloguing the travails of the modern American teenager in such films as Sixteen Candles, Weird Science, and Ferris Bueller’s Day Off. The one that most accurately replicates the feeling of being trapped inside a brick building all day with no chance of escape, though, is 1985’s The Breakfast Club, which gathers together one of each archetype (as Hughes saw them) and bounces them off each other as they endure a Saturday detention together. As played by nerd Anthony Michael Hall, jock Emilio Estevez, flake Ally Sheedy, stuck-up Molly Ringwald, and troublemaker Judd Nelson – in many ways, the core of the so-called “Brat Pack” — these five individuals learn a lot about themselves and each other, and the audience is given a handy, if somewhat unrealistic, reminder of how codified the high-school caste system could be. A rather more nuanced take on the experiences of high schoolers – and one that features some actual schooling – is 1982’s Fast Times at Ridgemont High. (To be fair, Ferris Bueller does include some classroom scenes, but the title character is notably absent from them owing to his having taken the Day Off.) Directed by Amy Heckerling, Fast Times was the screenwriting debut of rock journalist Cameron Crowe, who based the script on a book he had spent a year researching at a high school where he was able to go undercover as a student. The result is a perceptive, well-observed comedy-drama that gave early exposure to the likes of Sean Penn (as the spaced-out Jeff Spicoli, the film’s breakout character), Judge Reinhold, Jennifer Jason Leigh, Phoebe Cates, Forest Whitaker, Eric Stoltz, Anthony Edwards, and Nicolas Cage (back when he still went by Nicolas Coppola). Even more importantly, it didn’t give short shrift to the teachers, in particular Vincent Schiavelli’s creepy biology teacher, who takes his class on a field trip to the local morgue, and Ray Walston as the indomitable Mr. Hand, who has no illusions about his ability to reach his charges. Appropriately, the side of the educators is also represented in 1984’s Teachers. Director Arthur Hiller had previous experience exploring the inner workings of a public institution with 1971’s The Hospital, which benefited from having been written by Paddy Chayefsky. For its part, Teachers is centered on a popular social studies teacher played by Nick Nolte who tries his best to defuse the tension between his students and the rest of the faculty, which can run high at times. Comic relief is provided by Richard Mulligan, who plays a mental patient who wanders into a history class and begins teaching it, taking on the roles of such iconic historical figures as General George Custer (he of the last stand fame) and President Abraham Lincoln. The less said about the subplot about the gym teacher who sleeps with one of his students and gets her pregnant, though, the better.

Then again, the line separating the teen-sex comedy from the high school film can be so thin at times as to be nonexistent, as in Bob Clark’s surprise hit Porky’s and its sequels and imitators. And then there’s the teen-slash film, which gave rise to such lifeless parodies as Student Bodies (which was so bad director Michael Ritchie disclaimed all responsibility for it), National Lampoon’s Class Reunion (which incredibly enough was the feature screenwriting debut of John Hughes), and Slaughter High (which took the “stalking and slashing people at their high-school reunion” trope to new lows).

If you’re looking for something you can sink your teeth into, you would be better off seeking out something like 1985’s Once Bitten (which gave Jim Carrey an early starring role) or 1987’s My Best Friend Is a Vampire (which did the same for Robert Sean Leonard). In the former, Carrey is a virgin who’s targeted by an older, female vampire who needs his blood in order to stay young. In the latter, Leonard has to deal with the consequences of a similar encounter. Neither of them spends too much time worrying about their studies, though.

The same goes for Michael J. Fox in both of the movies he had out in the summer of 1985. In Teen Wolf, he’s just your average, underachieving, van-surfing nobody until his latent lycanthropy gene kicks in. Far from turning him into an outcast, though, his new abilities transform him into Mr. Popular, especially when wolfing out improves his skills on the basketball court. Fox then traded his basketball for an electric guitar and the werewolf suit for a time-traveling DeLorean in Back to the Future, in which he bumps into his parents in 1955 and prevents them from bumping into each other, nearly erasing himself from existence. At least in the course of correcting his mistake he manages to improve things for his family in the present.

The question of how much you would change about your past is also the theme of 1986’s Peggy Sue Got Married, in which Kathleen Turner plays a soon-to-be-divorced housewife who faints at her 25-year reunion and wakes up in her own body in 1960 with all of her memories of future events intact (as well as the fact that she’ll have no need for algebra whatsoever). Theoretically, this gives her the chance to alter the course of her life by not marrying her high school sweetheart (Nicolas Cage, showing that he’s long had an affinity for making off-kilter performance choices), but she soon finds out what some things are harder to change than others.

That’s also the lesson learned by the dim-witted title characters in 1989’s Bill & Ted’s Excellent Adventure, who are gifted with a time-traveling phone booth that allows them to ace a history presentation, thus saving the future from something totally bogus. The end result isn’t nearly as inventive as the similarly themed Time Bandits, which Terry Gilliam co-wrote and directed at the beginning of the decade, but it’s still a lot of fun watching Alex Winter and Keanu Reeves (as the titular dim bulbs) stumble their way through time, picking up historical figures like Napoleon, Lincoln, Socrates and Joan of Arc along the way.

The protagonist of 1987’s Three O’Clock High, played by Casey Siemaszko, probably wishes he had a time machine, that way he could go back and prevent himself from meeting new student — and ticking time bomb — Richard Tyson, who takes such exception to being touched that he challenges the honor student to a fight at the designated time. Considering the lengths Siemaszko goes to try to get out of it, it seems like nothing short of blowing up the school would have done the trick. Speaking of blowing up a high school, that’s the endgame of two films that bookended the decade: 1979’s rebellious Rock ’n’ Roll High School and 1988’s pitch-black comedy Heathers. The first, with its story of Ramones superfan P.J. Soles standing up her school’s strict new principal (cult movie legend Mary Woronov), cheerfully set the stage for the decade to come, and the second effectively closed the door on it. In it, Winona Ryder stars as the newest member of the most exclusive clique in school who falls under the spell of transfer student Christian Slater (literally playing a character named J.D.), who takes a page out of the Massacre at Central High playbook and starts methodically ridding his new school of its most popular (and, to his mind, least essential) pupils. Featuring a corrosively funny and endlessly quotable screenplay by Daniel Waters and dynamite direction from Michael Lehmann, Heathers is the ’80s high school comedy to end all ’80s high school comedies. You certainly wouldn’t be able to get away with making it today.