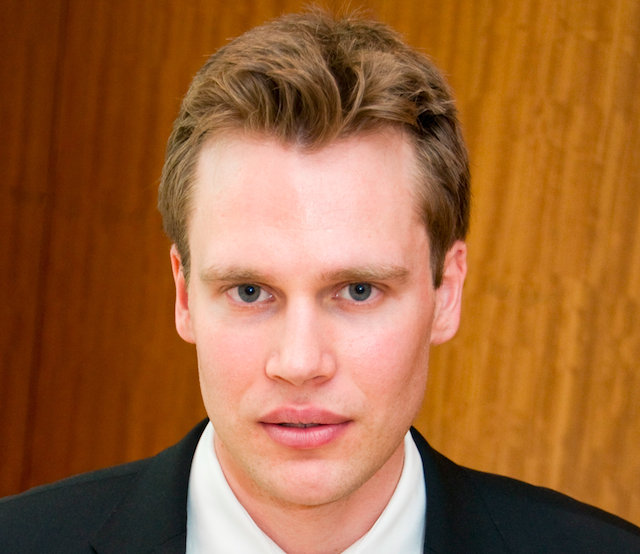 The Bloomington Symphony Orchestra has hired a new Artistic Director. On July 1st, Adam Bodony will be assuming the position currently held by Nicholas Hersh. Bodony was selected from a group of eight candidates who were invited for an interview and each had an hour-long audition with the orchestra.

Donna Lafferty, executive director of the BSO as well as a trombone player in the orchestra, said Bodony stood out early on. “From the very first, it was evident that he was interested in us,” Lafferty said.  “He asked very intelligent questions about the orchestra.  You could tell that he wasn’t just looking for a job, he was looking for the right job.”

His ease with the orchestra during his audition also set him apart. “His performance was fun, very musical, he wasn’t stern or a taskmaster, he was very collaborative,” Lafferty said.  “I pretty quickly thought, ‘Yes, this is the guy.’”

Bodony, 29, also has superb qualifications. He is currently executive director and artistic director-designate of New World Youth Orchestras, a youth orchestra organization comprised of three different orchestras in Indianapolis where he works with musicians ages 7-18.  He is also the assistant conductor of the Missouri Symphony Orchestra. An accomplished musician to boot, Bodony has a master’s degree in trombone performance from IU’s Jacobs School of Music and he frequently plays trombone with the Indianapolis Symphony Orchestra.

Bodony was eager to apply for the position with the BSO after fondly recalling an experience he had sitting in with the orchestra during his graduate studies at the Jacobs School.

“It only took one rehearsal for me to realize how special of a group the BSO was,” Bodony said.  The musicians are diverse and have a seemingly insatiable attitude for the highest quality of music making, the board is supportive and motivated, and the community treasures the organization.  Wrap this all up in a 45- year tradition and you have something extremely unique.

Founded in 1969 by conducting graduate student Geoffrey Simon, the Bloomington Symphony Orchestra presently consists of 85 committed musicians who come from all over the state to play for passion instead of payment.  The orchestra plays eight shows per season, and recently reached an agreement with the Buskirk-Chumley Theater to host most of their performances.

As artistic director, Bodony will conduct all of the BSO’s rehearsals and concerts, as well as attend board meetings and play a key role in fundraising for the orchestra. He will also lead the committee on choosing new pieces, and, though next season is already planned, he already has a few pieces in mind.

There will be a ceremonial handing over of the baton from Hersh to Bodony at the BSO’s summer concert in Bryan Park on July 13 at 6:30 pm.  The BSO is hosting a reception on June 14 to formally introduce Bodony to the public and talk about their upcoming season.  The reception will take place at 6:00 pm in the City Hall atrium.

Until then, Bodony says he is eager to begin his new role as the musical leader of the BSO.  “I’m very excited to be working with this orchestra at this particular time in their history,” Bodony said.  “There is so much energy within the organization to make the BSO the very best it can be, artistically, organizationally, educationally.  I just think it’s going to be a lot of fun!”