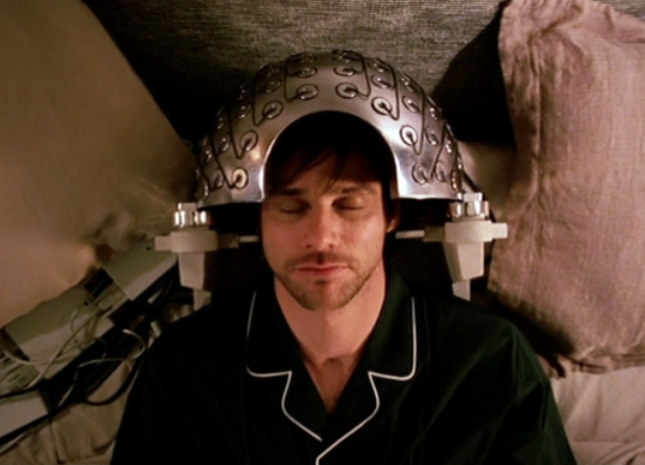 Eternal Sunshine of the Spotless Mind and Her ◆ by Brandon Walsh

With romantic drama driving so many mainstream Hollywood plots, it’s surprising that few care to chart the sordid trajectory of many romantic relationships. Audiences today generally know what they’re getting into when the terms “romantic comedy” and “romantic drama” appear, and the associations tend to be negative. I’d venture to say most Hollywood films are uncomfortable resolving heartbreak without a clearly defined material payoff, which usually comes in the form of sex with Jennifer Aniston.

Then there are films like Spike Jonze’s Her and Michel Gondry’s Eternal Sunshine of the Spotless Mind — two longitudinal studies of passionate males falling in and out of love in a near-future where technology romantically intervenes in ways both liberating and self-destructive.

In Her, Theodore Twombly falls in love with his operating system named Samantha, a sentient being with complex human emotions. Charlie Kaufman’s tightly scripted Eternal Sunshine questions whether it’s possible for Joel Barish to erase all memories, painful and joyous, of an extended relationship with a woman named Clementine using a fantasy version of electroshock therapy. Theodore Twombly installs his OS (Samantha) in Her

Her follows a real relationship with fervent wit and sincerity, less concerned with science fiction formalism. Eternal Sunshine’s frantic structure tells a love story in reverse, beginning with heartbreak, rehashed arguments and lingering unhappiness, and traveling back through the moments of unbridled joy that come with the early stages of love. In Her, similar moments with his ex-wife torture Theodore, to the point that he purchases Samantha, a comfortable alternative to what has brought him unspeakable heartbreak.

The films implicitly comment on an age where many of us connect with one another through media, to the point that minor plot changes could ground the films in a realm of uncomfortable reality. The shock therapy of Eternal Sunshine could be replaced with deleting one’s online presence, a blinding to images and words loaded with personal and potentially romantic meaning. Samantha in Her could be replaced with a meaningful online bond with another, not having met in-person and facing the challenges at a vague distance. The more we become involved in the input of our own identity, the more technology challenges our standard measurements for intimacy.

The insatiable desire for companionship runs though the films, a quality unidentifiable as it is silently corrosive to the heart. In Her, Amy Adam’s character describes love as “a form of socially accepted insanity.” Gondry’s entire film plays with the idea of love as the result of brain damage. Yet, these jokes intend to describe the cultivation of romantic love as an intensely spontaneous, subjective human experience that can’t be replicated (as Samantha does) or easily defined (what I see as the defined and marketed intention of most romantic comedies). Theodore speaks with Samatha about the strangers he encounters throughout the day, saying, “I imagine how deeply they’ve fallen in love, or how much heartbreak they’ve been through.” It’s with this outward empathy that we’re able to care for Theodore, in a way audiences can feel distanced from Kaufman’s inward-thinking hero, one of the film’s two thoroughly-defined characters.

[Photo atop this post: Joel Barish’s memories of Clementine are erased in Eternal Sunshine of the Spotless Mind.]

Both films hope to remind us to absolve the past in order to make new and meaningful relationships. When Joel and Clem fear they will face the same frustrations over again, they simply say, “Okay.” Likewise, Theodore is unable to escape the memory of his ex-wife. He writes to her, “I just want you to know that there’ll be a piece of you in me always.” Eternal Sunshine and Her portray relationships as a predictable affair, a story we’re bound to repeat, but are equipped to face their anxieties with honesty and compassion.

[Brandon Walsh is an undergraduate senior studying and producing film at Indiana University.]