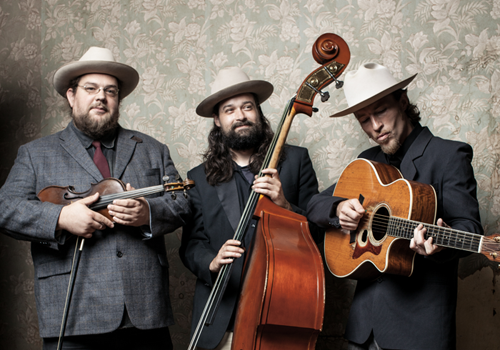 Howlin’ Brothers to Kick Off Series ● by Chris Lynch

Deer Park Manor, the site of many Bloomington weddings, will inaugurate an Americana Music Series on August 31 with the Howlin’ Brothers, a trio from Nashville, Tennessee (pictured above). Bloomington inventor and broadcast mogul Sarkes Tarzian, who contributed to the development of FM radio and color television, built the manor in the 1950s, and it has operated as a banquet facility since 1999.

Those who have walked the beautiful grounds and gardens understand why it was a fitting place for Presidents Eisenhower and Nixon to stay on their visits to Bloomington—and now its beauty can be enjoyed while taking in great music. According to Angela Backstrom, who is promoting the series, “The venue is in the outdoor courtyard, under a tent, at the lovely manor. There will be some tables and lots of chairs available, and there is a nice slate dance floor for those so inclined.”

Backstrom says that the series defines “Americana” very broadly. “Americana is a large range of music—folk, blues, country, alt-country, singer/songwriter, old-time, bluegrass, newgrass, string band, folk rock, indie, and more.” Backstrom feels that this kind of music in this unique setting will allow the manor to carve out a niche, offering something “that is currently somewhat underrepresented in Bloomington.” Wishing to differentiate itself from the classical music and club scenes, Deer Park Manor is offering “a family oriented, high quality scenic and sonic experience unlike anything else in town,” she says.

The Howlin’ Brothers, whose music combines influences from most of the range of Americana that Backstrom describes, will start the series with a bang. Ian Craft, one of the “brothers,” describes the trio as a string band. “We love blues and great songs,” he says. “We adapt them and perform them with banjo, fiddle, guitar, and upright bass, so to some it may seem like bluegrass—which isn’t wrong—but we also incorporate several styles from Cajun to country and anything else we run into that we dig.”

The trio has come a long way from when they first started working together. The three met in central New York while studying classical music at Ithaca College. “We were all at the school of music learning about different things,” recalls Craft. “Jared and Ben were studying guitar and recording engineering, and I was a percussionist. We met in a recording session—Jared was recording my steel drum band. We became great friends and started learning a lot of folk and bluegrass tunes.”

They learned to play a lot of instruments too. Craft plays banjo, mandolin, fiddle, and kick-drum; Jared Green plays guitar, harmonica, and piano; and Ben Plasse holds it all down on the upright bass. All three contribute vocals, trading off the melody to whomever wrote the song.

For the concert at the manor, the group will perform many original tunes from their commercial albums. Howl, released in 2013, peaked at number six on the Americana Music radio chart. That year they also recorded The Sun Studio Session, the recording of which is documented in a PBS series called The Sun Studio Sessions. Their stop in Bloomington is part of a national tour promoting their third album, called Trouble, which appeared in April.

Their set list will feature lots of other songs too. “We’ll play a full range of music from the new album as well as traditional tunes and other timely classics,” says Craft.

The Howlin’ Brothers’ stop at the manor will also feature some local talent. Bloomington singer-songwriter Jacob Latham will open the evening with an hour-long set at 7pm. At just 19, Latham is already an accomplished performer who has played clubs across the country. His rich and grainy baritone voice perfectly suits his folksy guitar style, mandolin picking, and Dylan-esque harmonica riffs, and will be a wonderful introduction to an evening of Americana.