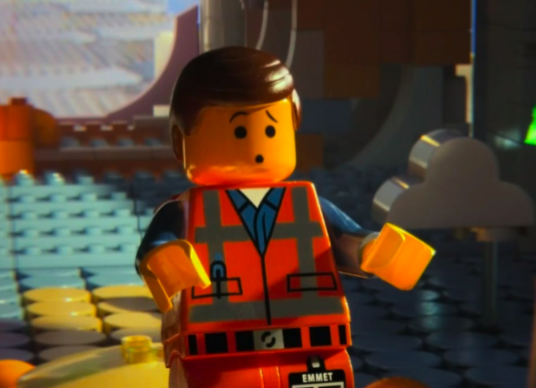 According to Wikipedia, the phrase “don’t judge a book by its cover” has been used at least since 1860. A hundred and fifty-four years later — and after being the moral of a great many works of literature and cinema, especially children’s and family cinema — the phrase might seem cliché, but that doesn’t make it any less true. For example, The Lego Movie seemed destined by its very nature to be a one-joke film; a feature-length toy commercial passing itself off as a low-quality comedy where all the jokes essentially amounted to “ha, these people are minifigures and their world is made of Lego, isn’t that silly?” (for those not in the know, “minifigure is the Lego Group’s term for the small plastic people that come with sets of Lego pieces). That’s not to say that such jokes aren’t present, that they aren’t funny, or that the Lego Group isn’t capitalizing of the film’s success, but the film has more to offer for 90 minutes than just a single joke and constant marketing.

[Image at the top of this post: Emmet — a minifigure character.]

Emmet Brickowski (Chris Pratt) is one of the many generic construction worker minifigures who populate Bricksburg, a city made entirely of Lego bricks. Bricksburg is quickly established as a highly conformist dystopia (everyone buys the same overpriced coffee (over $30), watches the same dopey tv sitcom (“Where Are My Pants”) and listens to the same catchy pop song (“Everything Is Awesome”) where the general public never question their tyrannical leader President Business (Will Ferrell). Conformist even by Bricksburg’s standards and viewed by his co-workers as completely generic, Emmet is lonely and friendless until he discovers a mysterious Lego brick called the “Piece Of Resistance”

Suddenly, a woman named Wyldstyle comes into his life and mistakes him for a prophesized figure called “The Chosen.” The wizard Vitruvius (Morgan Freemen) claims that whoever finds the Piece Of Resistance is The Chosen; the most talented, important, and interesting person in existence and the person who can help the “Master Builders” free the Lego universe from President Business, so Wyldstyle quickly recruits the bewildered Emmet into the resistance.

The Master Builders, it turns out, are minifigures capable of disassembling the Lego bricks of anything around them and reassembling them into everything else. Aside from Wyldstyle and Vitrivius, the other Master Builders all seem to be characters that the Lego Group really has made minifigures of (i.e. almost every family friendly character you can think of), including Gandalf, Dumbledore, Milhouse, Shakespeare, the 2002 NBA All-Stars, an Abraham Lincoln with a rocket-powered chair, and various assorted DC comics superheroes. These individuals prove much less pivotal to the film than trailers might have viewers believe, and our heroes are unable to count on them for help. Thus it’s up to Emmet, Wyldstyle, Vitruvius, Batman (Will Arnett), a cheery unicorn named Princess Unikitty (Alison Brie), a pirate with a robot body named Metal Beard (Nick Offerman), and someone simply named “80s Space Guy” (Charlie Day) to travel other worlds made of Lego bricks on a quest to attach the Piece Of Resistance to Lord Business’ super weapon “the kragle” (a tube of crazy glue) before he uses it to glue everyone in place forever.

With the enormous success of Disney films like The Little Mermaid, Beauty and the Beast, Aladdin, and The Lion King, other major studios jumped back into animation in 1990s. Initially it was animation of the 2d hand-drawn variety – including all but one of the films created by the short-lived division Warner Brothers Feature Animation – whether it was drawn using pencil and paper or computer software. With the rise Pixar, many other studios quickly switched to over to 3d computer animation and found great success there, but WBFA’s one attempt at a film with 3d animated characters (Looney Tunes: Back In Action) bombed and forced the division’s closure.

Since then, WB’s animated output has consisted of tv shows (almost all about Looney Tunes or characters WB has acquired) and direct-to-video Scooby-Doo and Tom and Jerry films. Then, last year, they created an animation “think tank” to develop ideas for animated films to be written in-house and animated by outside studios. In the meantime, the Lego Group has produced films for the small screen (both the TV and direct-to-video markets) since 2001, generally based on licensed properties (such as Monty Python And The Holy Grail In Lego and Lego Marvel Superheroes: Maximum Overload) but sometimes on in-house creations instead (such as the Clutch Powers and Bionicle franchises). Lego Movie is a good return to theatrical animation for Warner Brothers and a good theatrical debut for Lego, and we should be grateful to both of those companies and co-producers Lin Pictures, Village Roadshow Pictures and Vertigo Entertaiment for bringing it to the screen.

The computer animation by Animal Logic (a company also responsible for the animation of other cg films like Legend Of The Guardians: Owls of Ga’Hoole and the visual effects for a diverse array of live-action titles including The Fellowship Of The Ring and The Great Gatsby) looks fantastic. The plastic texture of the characters and their world look much more believable than in cheaper Lego productions, and the cgi blends seamlessly with the stop-motion that’s purportedly in there at certain points (at all times, the characters are deliberately animated to move in the jerky fashion one would expect from a completely stop-motion animated Lego film). The voice work imbues life into these characters, particularly Chris Pratt’s likeably enthusiastic portrayal of Emmet, Will Arnett’s amusingly over-the-top grim voice for Batman, Morgan Freemen combining his authoritative voice with a dry delivery of blunt lines for a hilarious Vitruvius and Liam Nesson’s deep voice giving threatening dialogue delivery for President Business’ henchmen Bad Cop. The writing mixes parody of standard fantasy stories about a “chosen one” who will save the world with some genuinely sweet and moving character drama (such as Emmet’s sad desperation to feel special) that creates a more unique tone that a pure parody or drama would have (even if it does skew towards more comedy than drama because, well, it’s a Lego movie). The comedy is childlike without being childish, which is infectious and a big part of the fun of watching the film.

Is it possible the film is getting more praise than it otherwise would because critics and parents went in with understandably low expectations? Certainly. Is it a perfect story? Not quite. Characters like Wyldstyle and Vitruvius don’t leave as strong an impression as they should, and a plot twist near the end becomes a tad bit confusing if you think about it too hard. Nevertheless, there is a great deal more good than bad here, and anyone who is a child or hasn’t abandoned their inner child and can still enjoy goofy family films should have a blast watching this.