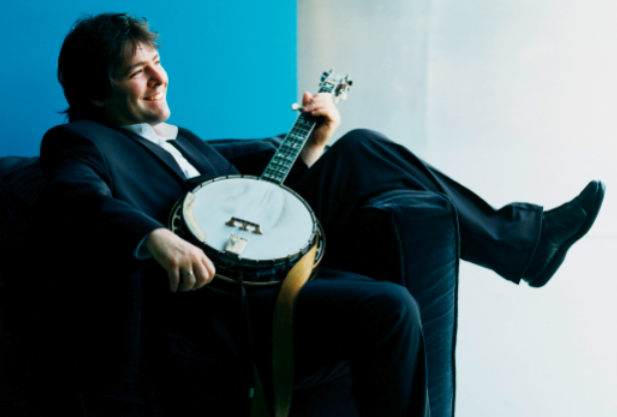 [Béla Fleck and the IU Jacobs School of Music Orchestra led by Giancarlo Guerrero will perform at the IU Auditorium on October 30.]

This October Bloomington will host one the most accomplished and versatile banjo players of our time, Béla Fleck. Renowned for adapting the banjo to virtually any musical genre, including bluegrass, rock, jazz, world beat, classical, and more, it’s no surprise that Fleck has been awarded fifteen Grammys since 1998. In fact, his thirty Grammy nomination nods in a variety of categories make him the first musician to have been nominated in so many musical categories in Grammy history.

But the gamut of his career extends beyond the Grammys. Fleck has collaborated with a wide range of musicians, often collaborating in bands, as he did with the New Grass Revival and his own band the Fleckstones. Although Fleck has performed alongside headliners like Dave Matthews and Phish, he’s no back up man. In September 2011 The Nashville Symphony Orchestra commissioned Fleck’s first stand-alone banjo concerto The Impostor, ten years after Fleck’s album Perpetual Motion, which he worked on with friend Edgar Meyer, won two Grammys.

Even with these milestones of musical grandeur under his belt, Fleck shows no sign of slowing down his creative momentum and continues to compose and tour today. Ryder asked Fleck a few questions about his life and the banjo the way he sees it.

Ryder What would you say was the most unique musical setting in which you incorporated the banjo? What other instruments were you playing with? What made it so unique?

Béla Fleck It’s hard to say… I guess at one time the Flecktones were the most unique setting, but followed by Perpetual Motion, with classical soloists, and Throw Down Your Heart, with African Musicians, duos with Chick Corea, playing with Indian and Chinese musicians on Tabula Rassa, and now with Symphony orchestra  and String Quartet – I’d say that I love to find unique settings for the banjo, and I don’t intend to stop looking for them!

Ryder You are the epitome of musical genre versatility—do you feel like you’re entering a new world when you cross genres? Or are they all more related in your mind, more so than some might think?

BF Well, I am certainly the limiting factor in each of these settings. They could do much more complex things if I weren’t playing! I can only play what I am capable of today, and keep trying to expand myself by putting myself in situations where I must learn and I must rise to the occasion. I pretty much play the same in every setting – as much like myself as I can figure out how to do. And so that relates the idioms insofar as how they relate to me, I suppose.

Ryder What would be a genre of music that the banjo lends itself to that is perhaps unexpected to untrained ears?

BF It would sound fine in most music. It can be a great rock instrument, really adding to the groove, if it’s the right beat. And in classical music it brings a timbre that no other instrument has. That is why it works so well in the orchestra, which is a group that supplies as many different distinct sounds as possible in one group.

Ryder You have been performing with the Fleckstones for 25+ years. What is it about the group makes it work so well as a unit.

BF Everyone in the Flecktones is an inventor, a leader and a composer. And we all like to confound expectations as to what is expected from our instruments. So we are like minds, and it isn’t easy to find collaborators who think as similarly as we do, especially considering how different our backgrounds are.

Ryder What part has musical collaboration played in your career? Who are your favorite musicians to play with?

BF Collaboration is one of the most exciting things to me in music. And the people that I get to play with are such phenomenons. Chick Corea, Edgar Meyer, Zakir Hussain, Marcus Roberts, Chris Thile, Victor Wooten, Howard Levy, Future Man, Sam Bush, Jerry Douglas, Dave Mathews, Brooklyn Rider, Nashville, Cleveland and Philadelphia Orchestras…Holy Cow, I get to play with the best!

Ryder You’re credited with having changed the sound and performance of the banjo—(if you agree) how would you say that you have done that?

BF I don’t know that that is really true. I have played the banjo in lots of settings though, and been able to get the banjo into the public eye pretty often. I am glad that I get to play music that I am proud of, and that it reaches out to enough people that I get to keep doing it!