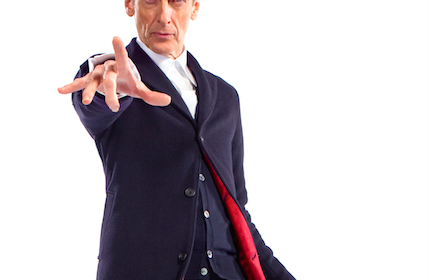 How many shows survive the replacement of any main actor, much less the one playing the title character? The British television classic Dr. Who thrives on it. Last year the world celebrated the 50th anniversary of the show and there’s no sign that it’s going anywhere soon. Peter Capaldi entered this season as the latest actor to play the iconic role and his quite different interpretation has been remarkable.

The title character is a mysterious traveler who goes by “The Doctor.” Dr. Who? Just “The Doctor.” He is a Time Lord, manipulator of time and space. He can go anywhere, anytime he wants. He mostly uses this incredible power to flit about, searching for interesting adventures and curiosities, but in the process he is frequently required to save some world (often Earth) from destruction. And he travels with one or more companions, usually human. They serve to connect the audience with a protagonist who, while presenting in human form, can frequently seem alien.

Every few seasons, the foes of the Doctor get the best of him and he dies. But death for a Time Lord is merely a temporary setback. The Doctor “regenerates,” getting a new body complete with a new personality, new likes and dislikes, and new personal goals and objectives, while the show gets a new lead actor. If regeneration presents the challenge of maintaining series continuity, it is also a recurring opportunity—perhaps unique in television—for the show’s producers to keep things dynamic and current. Fortunately, the show’s fan base has been notoriously sympathetic to this cycle, accepting changes that would likely spell decline for other series whose foundations rest on a single lead.

The last Doctor, played by Matt Smith, was the one who most successfully brought the show across the Atlantic and is definitive for many Americans. (For many, your first Doctor will always be your favorite). Smith’s gangly limbs flapping around like a raggedy-man enchanted viewers and his happy go lucky attitude made the show a light-hearted adventure alternative to the dark, gritty shows (think Breaking Bad) that have been the rave of recent TV critics and viewers. Nothing too serious, just a madman in a box careening across space and time with cute, young, attractive companions looking for trouble. Just enough trouble though, there’s never the least chance that things won’t work out happily ever after for all involved. The Doctor prior to Smith’s version (David Tennant) was quite similar, a light fluffy hero who always saved the world and got the girl. There was more than a bit of kissing.

No more. No more flirting, no more flitting about with the hands, and definitely no more bow ties or goofy hats. Capaldi’s Doctor is a return to the old school, hearkening back to the severity of the very first doctor (William Hartnell) or the gruff acidity of his successor (Patrick Troughton). This new Doctor has little time for frivolity and gives no allowance for the (relative) stupidity of those around him. He doesn’t hug, as that might infringe extreme self-dependence. The relationship between the Doctor and his companions has always been one of the interesting aspects of the series. The Doctor is immensely more knowledgeable and capable in any circumstance than the humans (sometimes non-humans) who travel with him. Why does he bring them along? What can they offer him?

Companionship, but that term can mean many different things. A close friend, maybe, whom you confide everything in, or maybe a romantic lover. Perhaps someone whose mere presence allows one to silently endure without loneliness. It is the latter that Capaldi’s Doctor requires, except for the silent part. The banter is as clever and quick as ever, although now almost unintelligible beneath the thick Scottish accent. When Russel T. Davies rebooted the series eight years ago he added an extra twist. The Doctor is the last of his species, last Time Lord, sole survivor of a horrific war that annihilated his race. As the last of his kind he would be lonely and value companionship. The Doctor doesn’t seem as tied to his companion Clara now in the way his predecessor was. He enjoys her company and she assists him ably, but we once again have the feeling that at any moment the Doctor might leave her behind forever. This Doctor seems dangerous, to his friends as well as to his enemies.

His enemies are darker now as well. The last several seasons have showcased one or two episodes that might be considered leaning towards the Horror genre, but none of them come close to the scariness that pervades just about every episode now. The lighting is grim, the tension unrelenting. My three year old daughter has watched many episodes with me and it wasn’t until this season that she began hiding beneath the blanket during the show. The prevalence of frightening subject matter, along with the new late evening broadcast time, have many wondering if the show is being intentionally directed towards an audience exclusive of young children. This is definitely not the same Doctor.

Or is it? That’s the question that arises with every new incarnation. A new actor, and an obviously new take on the character. It’s something quintessential to the show, the continuity of the old with the freshness of the new. Perhaps that’s something more poignant in a culture as old as the British that we Americans don’t quite grasp. Here novelty is exalted, and this is the first time that a large American audience will have to grapple with a new Doctor. The premiere episode of this season confronts it head on and doesn’t shy away of the worry many fans will have. The Smith Doctor is gone, but is Capaldi’s character really the Doctor? With all the twists and turns of style and set, and withstanding the criticisms of the overly complicated plotlines and overused themes that Executive Producer Steven Moffat (also of Sherlock) insistently relies upon, the answer has been a resounding yes. The Doctor changes a lot with each regeneration, each new actor brings something new to the role. Each new actor must find the quintessential bits of the Doctor and then allow that to explode forth from every scene. Peter Capaldi does that and the successes of this season rest primarily on his superb performance. He will be a Doctor remembered for years to come.