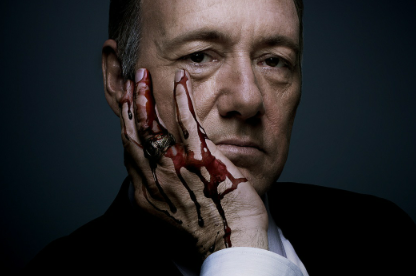 Thanks to the ubiquity of the DVR and streaming services like Netflix and Hulu, many like to say that we live in the golden age of television. Whole seasons are only a click away with next to no commercial interruption and a year’s worth of episodes being delivered at once. Sometimes it feels like waiting week to week for the next installment is a thing of the past. With networks like HBO and Showtime raising the bar, cable has had no choice but to follow suit and offer a similar level of excellence to its programming in an effort to compete. Years ago, everyone talked about HBO, but it’s AMC, a staple of basic cable packages that had the best show on TV in 2013. There may be internal wars going on between basic and premium channels; the internet and cable providers, but one thing is certain, we the consumers are reaping the benefits. And oh, the bounty is plentiful. It’s been a great year of television.

Season four was a way of reinventing itself. The show has had its ups and downs, but the season four finale proved that it was worth the wait.

[Photo of Kevin Spacey as Francis Underwood at top of this post.]

The best example of the new TV model. It may have had a rocky first couple of episodes, but having all of season one available from the start greatly helped this show get off the ground.

Sadly, 2013 saw the cancellation of this sprightly comedy that was so much more than a Friends rip-off. It could have gone on for its own ten seasons if only it was seen for the gem that it was. The current season was more dialogue heavy than spy thriller, but it proves that good writing is good writing. It may be a cartoon, but many a show could take characterization lessons from Archer by watching a few episodes. Now that the creators have embraced situational humor over cheap shots at nerd culture, TBBT continues to expand, attracting viewers like stray electrons making it one of the most watched shows on television.

It may have started as a clone of The Office, but it’s become so much more since then. PaR continues to grow in terms of scope and in characters in new and wonderful ways. There’s no tighter cast on TV. Each season gets better than the one before. The source material only provides so much as it’s the striking visuals and impeccable casting choices that keeps this show fresh. Political intrigue is so much more interesting when knights and dragons are involved.

A perfect retcon, reboot and revitalization, this love letter to Doctor Who fans had three Doctors on screen at the same time — one of them, John Hurt! — what more could Whovians have asked for? Thank you, Steven Moffat.

Another example that bad guys have more fun, the boys of SoA have never been better. Utter destruction is always one step away and no character is safe. Each episode is like racing down the freeway on the back of a motorcycle without a helmet. It’s OK to scream while you hold on. A perfect end to a perfect show. The five-season arc from mild mannered chemistry teacher to drug kingpin was completed with a painter’s grace. We’re sad to see you go, Mr. White, but it was one heck of a ride!