The Push And The Pull 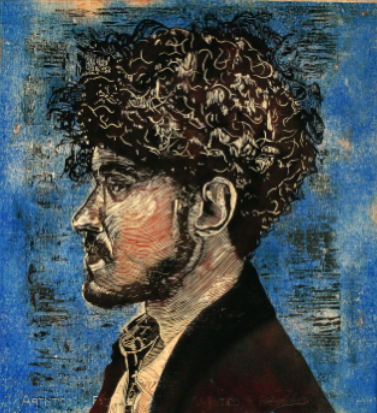 When we first met in 2012 at Indiana University’s MFA Printmaking Program we didn’t know our paths had already crossed 50 years before in Iowa City. Keegan’s grandfather, Thomas F. Chouteau, worked under the preeminent printmaker Professor Mauricio Lasansky at the University of Iowa in the early 1960’s. In the 1940s Lasansky’s program launched the “Printmaking Revolution in America” that brought printmaking on par with painting and sculpture as a fine art medium. His students fanned out to universities across America to establish new printmaking programs, including here at Indiana University with Professors Marvin Lowe, and Rudy Pozatti, a student of Wendell Black, one of Lasansky’s first students. Keegan’s Aunt, Suzanne Chouteau, Professor of Art at Xavier University, also worked with Lasansky in the 1980’s. When I told Keegan — who was about to enter his second year of the MFA program — that I was coming to Bloomington from Iowa City after spending the previous 7 years working with the Lasansky family, we both knew we shared passions for a particular era in printmaking.

I first became absorbed in Printmaking in 2000 as an undergraduate at The University of the Arts in Philadelphia. I gravitated to its tactility, varied processes, and focused emphasis on drawing. Each medium within printmaking bends the artist’s intention to conform to its inherent properties. At its core printmaking is about resistance. The medium literally pushes back against us. We must contend with the copper plate, the woodblock, and the limestone slab. With them, we are involved in a continual process of preservation and decay, choosing what, when, where and how to allow forces — both chemically and directly from our hand — to act on them. Exactly how these forces will manifest in the final print is often unpredictable. Printmaking is my primary artistic medium because it forces me to relinquish my desire for complete aesthetic control and acquiesce to the beauty that only arises from the interaction between both human and natural forces. Keegan’s father, Michael Adams, first introduced him to printmaking when he was 17. They etched a small drawing of a green pepper on a zinc plate using nitric acid. Seeing the print pulled changed his life. The combination of drawing, acid, metal, inks, paper, and thousands of pounds of pressure was exciting and seductive. It wasn’t until an introductory class in printmaking in undergrad that he discovered the full extent that printmaking had in his family’s history. Keegan avidly studied the history of modern printmaking, especially the Iowa legacy of innovation. New techniques, new sizes, new complexities of color and printing, and new thinking all came together. He understood that Midwest universities were the pioneers of this movement. Keegan recognized how intimate this print history was to the medium of printmaking as a whole, but even more intimately in terms of his family and own history. Indiana University’s leading role within this print Renaissance made their MFA program a premiere venue for graduate study. Its tradition of innovation was something he wanted to continue, like his relatives at Iowa, and nourish it further into the 21st Century.

In 2004 I packed all my belongings into my compact car and left Philadelphia for Iowa City. My hope was to work with the Lasansky family. A philosophy mentor of mine who grew up in Iowa City had introduced me to Lasansky’s youngest son Tomas’ work. I was enthralled. When I began to study his father’s work at the Philadelphia Museum of Art I knew these were the artists from whom I needed to learn most. After a year of knocking on his door, Tomas finally took me on as his printer and assistant. The opportunity he provided changed my life by providing me access to generations of artists and art, all with printmaking at the core of its creative essence. After 7 years, and without the prerequisite degrees to teach, I decided it was time to pursue a graduate degree. I chose IU for the same reasons as Keegan.

Keegan and I have the unique experience of being at IU during a period of transition. Ed Bernstein, Director of the program for over 20 years, who took over the position from Rudy Pozatti in 1991, just retired. Tracy Templeton, from Southern Oregon University has just taken the helm. Professor Templeton has already begun laying the groundwork to ensure IU remains a global center for printmaking in the 21st century. It is exciting for us to be able to add our voice to the future of the program. We hope our show pays homage and respect to the traditions that have lead IU’s program to its esteemed place in printmaking’s history. We believe the next century will be as important as the last to the survival of printmaking as an indispensible fine art medium. It will not survive without major research institutions like IU being the laboratories of innovation and stewards of its history.

It may seem that with its many technical concerns and idiosyncratic properties printmaking would be limiting in the pursuit of personal expression. But it is precisely how we push against and manage the resistance of those limitations–how we overcome them– that makes printmaking timeless.

Our current show, Keegan Adams/Adam Rake: Recent Works at The John Waldron Arts Center’s Rosemary P. Miller Gallery opening on December 6th, highlights the common origins and unlikely intersections of history that brought us together in Bloomington. Between our works one can observe what can be described as a distinctly “Midwestern vernacular” born out from that history. Yet, as newly appointed Director of IU Printmaking Tracy Templeton says, “both artists employ personal experience and identity to form compelling, tactile images that indirectly speak to the intimacy of their origins.” The show will include approximately thirty works. We will also display examples of the copper plates we used in the production of the prints, which are objects of importance in their own right.