Theater: The High Cost Of Freedom 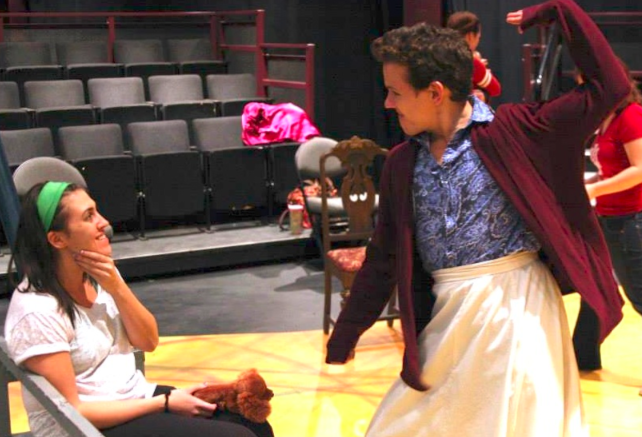 Indiana University Theatre, fresh off a successful production of the Tennessee Williams classic Cat On A Hot Tin Roof, turns its attention to the work of a more contemporary European playwright – the female British playwright Caryl Churchill and her celebrated Cloud Nine, which received its world premiere in London in 1979.

The first act of the play is set in Colonial Africa during the Victorian era, and examines racial, sexual, and gender politics through the lens of a large British family, and their circle of friends and servants. The second act, set in 1980s London, ages the same characters only 25 years. This theatrical feat of time-travel allows us to compare our modern day mores with those of the past, as we question how our society has changed – or not changed – over the last tumultuous century.

Churchill subverts all audience expectations by casting women as men, men as women, a white man as an African servant, old men as young children, and even portraying the youngest child as a mere rag doll. In doing so, she crafts a dizzying, darkly humorous satire on the nature of sex and power, and the way these tidal forces can bring people together or tear relationships apart.

We spoke with second year MFA Directing student Rob Heller, who helmed this newest production of the gender-bending play that leaps across centuries and continents. After growing up in Philly and spending eight years in New York City developing new musicals, he was recruited to join the Department of Theatre, Drama, and Contemporary Dance at Indiana University. We spoke with Rob about bringing this challenging play to life with his group of talented IU students and designers.

Ryder: What is this play about? Can you give us an elevator pitch for it?

Rob Heller: This play is about how we contend with issues of family, gender and sexuality throughout all of time…How do we know how to function? What are our roles and how can we come out of it somehow loving each other and having community? Ryder: Why did you choose this play?

Heller: Caryl Churchill’s a playwright that I’ve been wanting to contend with. It’s lovely because she’s a female playwright and she also deals with a lot of issues that seem important to the world at large so it seemed like a good time, particularly now, to contend with this play in the midst of a lot of political issues about sexuality and gender and gender roles coming to the forefront at the moment.

Ryder: What’s your directorial take on this particular production that makes it different than others that have happened in the past?

Heller: [The original 1979 production] was created by the Joint Stock Company collaboratively. It was a collaborative workshop with a particular group of people with Caryl Churchill at the time, dealing with issues of the time and out of that came this play so I think the challenge each time is to create a group of people that will be unique in their approach to this play – that’s about them as much as it is about the play. So I think what’s unique about this production is that these particular actors bring just something different to the table.

Ryder: One of things that people always latch onto is the gender switching and the very obvious sort of theatrical devices. Could you talk about how that’s going to challenge the audience and how you worked with it?

Heller: Our first choice… was to put it in the round because there’s no tricks. We got no tricks for you. We’re showing you all our strings. It is a theatrical event.
It’s a great gift to an actor to have to play something that’s far from themselves. We talk so much about type (in America especially): What is your type? Who are you going to play? So it’s great fun to see sort of a light in an actor, just as a human, and say, “You’re going to play these two drastically different things.”

What we’ve discovered from going to the Kinsey Institute and from talking amongst ourselves is that these lines between male and female are so fuzzy; it’s not one or the other. Everyone is sort of in the middle somewhere.

Ryder: Does the gender switching play into a sense of comedy?

Heller: The humor comes from the moments. We are playing up some of the – “grotesque” is not the right word because we have connotations with that but – the clear differences in character vs. actor. And I think you’ll find that it gives the audience permission to look at the play in a different way: “Okay, It’s not realism . . . it’s realistic, but there’s clear things that are a little bit off …” I think in seeing the gender switch is it gives the audience a little bit more permission to laugh.

Ryder: In the first act we meet Clive, who the audience might see as the most emblematic of imperialism and male dominance. Do you make those sorts of judgments about the characters when you’re coming into it? Do you see Clive as a symbol or a character?

Heller: You know off the page early on that’s the investigation we have to do – myself and the creative team, the designers. Of course we look at those implications but once you get in there with an actor all you think about is: What does he want? What is he afraid of? Why is he putting on this mask? Who’s telling him this is what he’s supposed to be and when does that break? Because all these characters break relatively quickly from what we think they are into what maybe they really are.

Ryder: Without revealing any of the plot points, I think we can say that there is a very complicated set of romantic relationships between all of the characters, including some relationships we might consider unconventional or illegal. How did you approach that?

Heller: We have so many stigmas about nontraditional sexual relationships in our society, especially in America. The actors ask the question: What is it to have an intense love for someone? And what are the lines between love for an uncle, or a father, and a lover, and when you’re nine, how do you know the difference? It’s a bunch of very difficult questions.

Is sex only about lust? I don’t know. It might be about many things: about power, about status, about acceptance as much as anything else. (laughing) So, I only have more questions. We are exploring answers.

But you know, I think more powerful than the sort of large questions being asked here are the more personal: How do you create a family in the face of something different? Parenting by committee is a big theme throughout Churchill’s plays – this idea of having seven parents all sort of doing it together and some sleep with each other and some don’t and some do this and some do that. We have these very firm boxes that we try to put everybody into and maybe that doesn’t quite suit everybody.

Ryder: This is Indiana and, not to paint too broad a brush of Indiana, but I would say this play would clash a little bit with the conservative, Midwestern, almost bible-belt mentality. Can you talk about what you’re expecting from the audience?

Heller: I have never been a person that’s trying to goad you and to get you to be angry and to get you to leave here frustrated or angry. I want to question what we believe to be true. I think, like science, we keep coming up with hypotheses and proving them wrong…I would love for people to at least question what they believe to be true, and if they return to their previous beliefs – fine, that’s great and I hope it serves them, but if not – at least taking one evening’s coffee after this play to talk about why do we have these sort of roles that we’re meant to fill: Duty – they must say duty 70 times in the first act. “It’s my duty to do this its my duty to do that.” Well, is it?

Ryder: Martin at one point toward the end says, “There’s no point being so liberated that you make yourself cry all the time.” Do they lose anything by throwing away these established social structures?

Heller: Yeah, That’s what’s lovely about Churchill and I think about playwrights in general is that they’re not offering an answer.

The first act is very rigid. [Churchill] talks about it being almost “corseted” and Act Two is very wide open. The first people you see are the lesbians and the gays. All of this freedom and we can talk about it and we can say all these things out loud….

Yeah, It’s a double-edged sword. Is the freedom just as bad as the sort of corset?
And where’s the middle ground that we need to find?

Ryder: You don’t have access to Caryl Churchill except through her play. As someone who has worked primarily with new works, what is it like not having access to the playwright?

Heller: You know it was interesting coming here because in New York, my niche has been developing new musicals – it’s all I do. My whole resume is new work, which is exciting and cool and different but I came here to contend with a playwright who – the piece is written and I have to deal with it. So it was exciting for me…You have to unlock the answers for yourself; and Churchill’s a smart lady. She didn’t leave anything vague accidentally; so it’s for us to fill it and that’s a gift to an actor.

Ryder: There are a lot of different types of parenting going on in this show. Did you find yourself judging character’s parenting styles? Playing “good parent/bad parent?”

Heller: My parents divorced when I was in first grade… so right off the bat with divorce there was some sort of failure there. So I don’t think about good/bad; I think we have this assumption that suddenly you get married and have kids and you know how to parent. Its really hard, it’s really hard. We all fail at times and succeed at others.

There’s lovely moments: In Act Two, if you watch Cathy — who’s the young girl — if you follow her perception it’s really satisfying in that her mother will do something very awful to her – shocking to us probably – and 30 seconds later she hugs her mother. There’s forgiveness. I think that’s a big thing: to forgive others, to forgive yourself and to move forward, as opposed to sort of getting stuck in the past.

[Image at top of this post: Evelyn Gaynor (the boy) and Nathan Robbins (his mother) rehearse. “Cloud Nine” was presented at the Wells-Metz Theatre, December 6th & 7th. Colin Bridges is a filmmaker and visual artist. He holds an MFA in Theater from Sarah Lawrence College and currently works as the Video Coordinator for the Indiana University Office of Admissions. You can find more of his work here and here.]