We Are The World 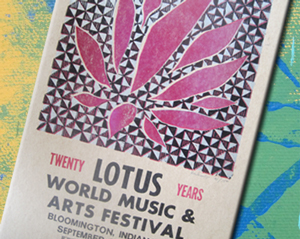 Bloomington’s Lotus World Music and Arts Festival turns 20 this year. Over the course of two decades, Lotus Festival has become one of the most important arts events in Bloomington and the Midwest, now annually attracting 11,000-plus attendees and utilizing more than 500 volunteers. Through the years, Lotus Festival has broadened its scope, adding free concerts, visual art components, and interactive all-ages activities that have become requisite elements in the Lotus gestalt.

This anniversary year — Lotus at 20 — features an amazing roster of remarkable talent: 32 musical performers and ensembles from across the globe. Lotus at 20 also has been expanded to five days (September 25-29) with two additional concert events: an African Showcase and an IU+Lotus Campus Concert.

Twenty years of celebrating the diversity, beauty, and joy of music from cultures around the world: That’s impressive. Twenty years of continuous successful operation is a great accomplishment in any arts discipline, even more so in the esoteric field of world music.

Most remarkably, everything is consistently superb in Lotus land.  Each year’s artist bookings by Lee Williams carefully balance musical styles and cultures and even instrumentation. Each festival schedule strategically mixes extraordinary artistry in performance and opportunities for communal creativity. Each facet of the Lotus Festival microcosm is perfectly attuned to the aesthetic context in play.

I don’t know how they do it and so I admire the Lotus staff and the festival all the more for reliably producing a thoroughly conceived and intricately interwoven creative happening. I love Lotus for its people, its street theater, its gentrified boheem vibe. Most of all, I love Lotus for its truly and wholly global cultural diversity.

I’ve been an avid listener and collector of world music since high school. The exploration of new sounds — harmonies, rhythms, instruments, voices, languages, melodic lines — has been as natural and essential to me as breathing. I’m delighted, intoxicated, rejuvenated when discovering musical sounds so unexpected that my brain seems to spin. I want a world as culturally vibrant and hugely variant as our global artists provide. I find solace in the wonders of an undefinable, unattainable musical horizon. But that’s me.

Not everyone enjoys, or desires, or even tolerates music and arts that are exotic, unfamiliar. Most people don’t, to be candid. And that’s OK; that’s the way we are. If in the past I once was hellbent on changing American aesthetic tastes, that phase has long passed. I’m comfortable with our postmodern You do you and I’ll do me compact.

And Then We Had Our Summer Of Hate

Across our country, the George Zimmerman saga let loose an eruption of hate-speak and reprehensible commentary from individuals as varied in demographic segment as our big bad-ass nation could muster. The topic clogged and consumed traditional media, Internet media, social media, and conversations face-to-face and virtual. The trial and verdict invited a nationwide exhale of angry opinions and ill-informed remarks more accusatory than productive, intentionally hurtful and argumentative.

Coinciding with — perhaps emanating from — the Zimmerman vitriol was a startling tsunami of angry tweets from viewers of the 84th MLB All-Star Game, maligning Marc Anthony’s performance of God Bless America. Most were critical of having a “foreigner” singing this patriotic song: “Marc Anthony singing God Bless America on the MLB Allstar Game…am I the only person that finds that un-American” (all sic) tweeted an MLB fan; “Why is a Mexican singing ‘God Bless America’??” and “Shouldn’t an AMERICAN be singing God Bless America?” wrote others. Anthony is a New Yorker, born and raised — of Puerto Rican descent, not Mexican — and none of that even matters.

These overt displays of xenophobia extended further than the divisive race-focused commentary we witnessed around the Zimmerman ordeal; these insults were also framed in angry, self-righteous nationalism (and were erroneously nationalistic at that).

I was surprised and appalled by the rampant jingoism as much as — perhaps even more than — the disgraceful racism. I shouldn’t be. I know that, as a national people, we’re not yet “past it” in issues of racial, cultural, sexual, political diversity.

So I found myself reflecting with increasing frequency on Lotus Festival, and everything about the festival that makes it so easy for us to access diverse musical traditions from around the globe. Lotus doesn’t simply represent or exemplify multiculturalism — like an important illustration of some attribute to which we might aspire. Lotus embodies and integrates internationalism at its very core. When we participate in all that Lotus offers, we immerse ourselves in a healing multicultural balm; we step through a wonderful and fleeting gateway to deepened appreciation of our huge world, and our country’s patchwork quilt culture.

I like to think that by understanding different cultures, nations, peoples we strive to be our best selves, our most empathetic selves, our most human selves, and I believe that fostering a welcoming multicultural community is when we are most American, not least. We need Lotus Festival, as we need each other.

If you’ve not yet given yourself the treat of experiencing international music in its vast array of sounds and styles, you need only attend one of the many free Lotus events. For those who revel in all the global goodness that is Lotus Festival, you’ll find Lotus at 20 a delight beyond measure.