Wiiliam S. Burroughs At The Bluebird 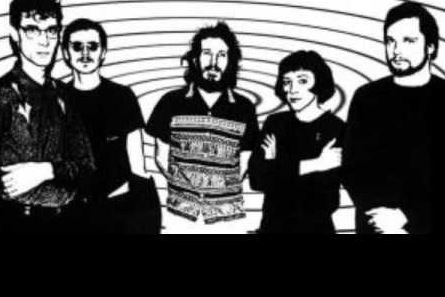 [On March 19, 1981 William S. Burroughs gave a reading at the Bluebird, accompanied musically by Bloomington’s legendary Dancing Cigarettes. The following is an excerpt from C.K.’s journal.]

Thursday saw my last day of class, and the long-awaited William Burroughs/John Giorno gig at the Bluebird. I could scarcely wait. Michael C. declined to go at the last moment, so I went with Melanie and my brother Jim, who was recording the show for posterity by agreement with the Cigs.

John Giorno of “Dial-A-Poet” came on first and read (or shouted) four or five poems which were very aggressive and anti-woman, yet amusing. (“Making love to you is like making love to someone on the subway!”) After a long and dramatic pause, Burroughs came forward led by a young preppie-looking asshole said by the Cigs to be his secretary. Burroughs was shorter than I had expected, and skeletal, and frail, yet he read his selections with a vengeance which everyone loved. He sneered and snarled and hung over each word like a hooded viper in a way wonderful to behold. I was sitting with Melanie and Bill Weaver and the Cigs and a few other artsy friends right before the stage by the steps, and had a view of him which could not be equaled anywhere else in the house.

Burroughs finished all too soon, and accepted the crowd’s roars of applause, deigned to give a short encore of a piece about the origin of the universe (our universe is a drop of grease which a giant billions of years ago shook from his fingers, the grease not having quite hit the floor yet) and departed amidst tumultuous acclaim. There came an intermission while Burroughs sat down and signed autographs on copies of Armies of the Red Night and the Cigarettes set up their equipment. I talked to Jim, who had been recording in the same corner with Burroughs and Giorno all night. He was not much impressed with either of the two poets’ readings as such, but was impressed with their repute. He said with evident pride that he had shared a joint with Burroughs, and Giorno had had a pleasant conversation with him and tried to pick him up. I was amused to see that Jimmy was having such fun.

The Cigs began and I danced. I lasted through two sets, yet I had little encouragement from any of the Cig devotees except Bill Weaver. Melanie split early, Laurie didn’t have the money to attend tonight, and Margot went home feeling ill after Burroughs ended. It was discouraging. My screams and shouts lacked enthusiasm or wit. I danced almost all the songs but did not cross over the border. Bill praised my efforts and made it all worthwhile.