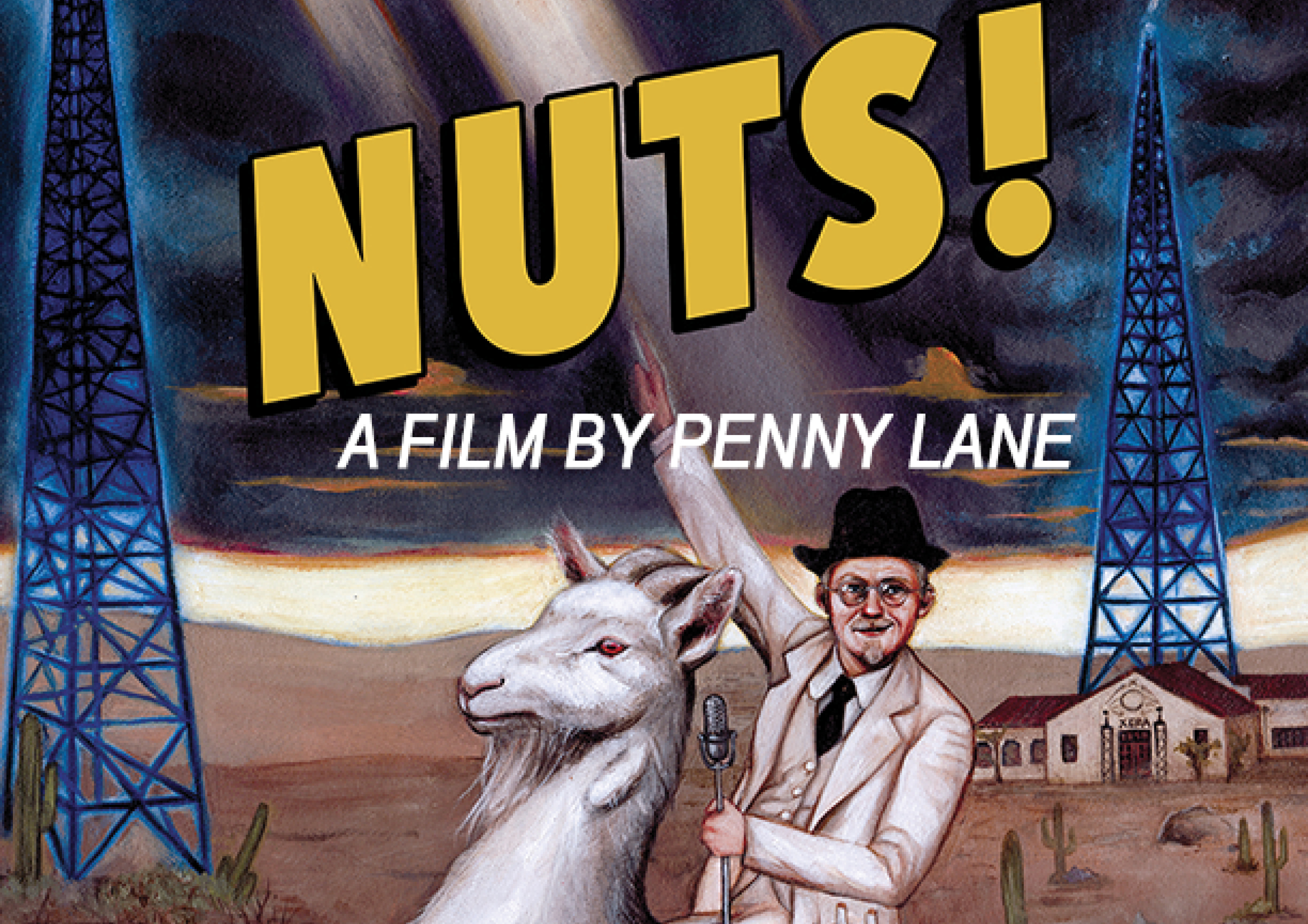 Inventive and wildly funny, NUTS! recounts the mostly-true story of John Romulus Brinkley, a Kansas doctor who in 1917 discovered that he could cure impotence by transplanting goat testicles into men. From there, the story only gets even stranger. Mixing hand-drawn animated reenactments, interviews, archival footage, and a highly unreliable narrator, NUTS! traces Brinkley’s rise from poverty and obscurity to the heights of celebrity, wealth, and influence. Directed by Penny Lane. Yes, that’s her real name.

♦ The 1930s dustbowl contained rich soil for nurturing strange characters. An entire strata of Americana exists, miles from the top-hat-and-tails stories peddled by Hollywood. Nuts! is a ridiculously enjoyable gem of a documentary about a great historical footnote, John Romulus Brinkley, a rags-to-riches-and-back-again huckster who peddled an impotence cure involving goat testicles and became one of the most ubiquitous broadcasters in the early days of radio. –Sundance Film Festival

♦ For those who listen to They Might Be Giants, play along with NPR’s Wait Wait… Don’t Tell Me! and subscribe to Mental Floss, Nuts! is their Star Wars. But you don’t need to be a bookish dweeb with your hands up at Barnes and Noble readings to enjoy it. I mean, it’s funny. It’s a story so odd you’ll wonder why you haven’t heard it before. –The Guardian

♦ “Critic’s Pick! An inventive documentary… tells a quintessentially American story – one that elicits both wonder and horror. An entertaining tale of made-in-the-U.S.A. bunco. This brisk movie is that, and more. It culminates in a cinematic coup de grâce bold enough to spin your head – one that gives the movie an entirely new dimension.”
– Glenn Kenny, The New York Times
Read the full review here.

♦ “Marvelous! Showcases, with wit and suspense, the undoing of one of the 20th century’s great flimflam artists.
– Alan Scherstuhl, Village Voice

♦ “Penny Lane tells an extraordinary story… She is a story-maker, a sort of historical epistemologist, and also an artist of taste and invention. She uses animated sequences…(and)  extraordinary archival research and comes up with newsreel footage… restoring the past to a vital immediacy. She’s a classical modernist whose good and wondrous story reflects her own astonishment at the weird ways of the world and its archival traces and trails. She herself watches the scope and implications of the project expand into astonishing realms of power and influence. NUTS! is fiercely original in its ingeniously dramatic storytelling, its vision of the place of such stories in the media-scape, and its aesthetically refined yet good-humored vigor.”
– Richard Brody, The New Yorker online

♦ “The strange story of one of the most successful snake-oil salesmen of the early 20th century. Lane, like any great storyteller, springs surprises after luring her audience in (and) keeps spinning one remarkable anecdote after another. Given all that’s happened in the world since NUTS! debuted at the Sundance Film Festival this past January, this documentary has gone from being an amusing novelty to an urgent warning.”
– Noel Murray, A.V. Club, The Onion