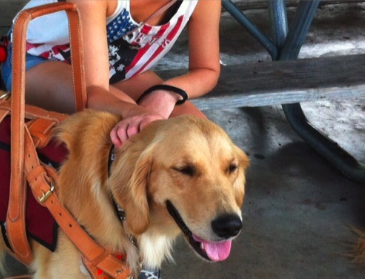 I remember the day very well. The sun beat down on the paved road that snaked through my parents’ expansive southern Indiana subdivision. It was midday Easter weekend of 2010 and I carried a thick text of famous plays in my hand. I was home from college for break and thought I’d go do some assigned reading by the lake since the weather was so nice, but I soon forgot about this. I realized I was lost. Lost in my own neighborhood at age 24, with no idea how to get back home.

I stood there a while trying to think of the best thing to do but the more I thought, the more anxious I became so finally I resigned myself to simply standing there in hopes of someone finding me. After waiting for about twenty minutes a jogger came by.

“Hey,” he said. “I’ve seen you standing there. What are you doing? Waiting on a friend or something? Going to babysit somewhere?”

“That’s a pretty big book for a little kid like you,” he said changing the subject. “Do you go to Highland Hills?” he asked, referring to the local middle school.

“No sir, I’m home from college for break actually.”

“Oh.” long silence. So, you going somewhere then?”

I decided it was best not to skate around the issue any longer. As I opened my mouth, I threw up a silent prayer: “Please don’t judge me.”

I took a deep breath… “Sir, how much do you know about autism and learning disabilities?”

That night, my parents and I would sit down to have the discussion that would change my future. “Adria,” my mother said, “I think it’s time we get you a dog.”

Enter Lucy, now a three-year old yellow Lab privately trained by John Senac of Bloomington’s Canine Companions, to assist with disorientation due to severe nonverbal learning disability and  anxiety disorder. She finds the house when given a verbal cue as well as assists in fostering social connections and acting as a social bridge in the community due to difficulties posed by mild autism.

Before I had Lucy I, like many people with autism had very few friends and had difficulty carrying on conversations with others. Now, I have so many friends I can’t even count them all. For the first time in my life, I’m faced with having to choose one social outing over the other because my calendar is so full.

Senac said the best part of training a service dog is “always seeing the gratification the owner has in the final results.”  Normally, a service dog will come pre-trained to his or her partner through either a national service dog agency or a service dog school. But in Lucy’s case, Senac said, “I got to see both you and Lucy develop together. The hardest part has been the small setbacks of the handler doing the training. When I train a dog every day, I know each little miss and mistake that needs more work or improvement, but I only had weekly meetings with you to both teach you technique and new tasks and also try to tackle mistakes. We have come a long way from the puppy who chewed on something in my car to the dog that can have a field trip of kids bombard her and not even flinch.”

There are several different types of service dogs. Common breeds trained for service work include: German Shepherds, Labrador Retrievers, Golden Retrievers, and even Standard Poodles and Dobermans. Senac said, “there are a lot of breeds that can be service dogs, but it all comes down to can they do the work and do they have the drive to do it. Most dogs are evaluated on health and temperament as they are young and training. Plain and simple, the dog has to be healthy enough to be in public and perform the task at hand. From a temperament perspective you can’t have aggression, timidity, anxieties, fears, etc. and from a drive perspective, a dog has to want to do or enjoy certain things. For example, if a dog has no drive at all to retrieve, he may not be the best helper dog for picking things up and returning them to his owner.” Most service dogs are fully trained between the ages of 24 and 36 months depending on how highly involved their task requirements are.

In order to qualify for a service dog, the disability does not have to be visible to the naked eye. It simply must be documented by a medical professional and significantly interfere with the individual’s ability to function on a daily basis and lead an independent life. The first guide dog school in America, The Seeing Eye, opened in 1929 followed by Canine Companions for Independence in 1975, which is still active today in several parts of the country and provides hearing alert and mobility service dogs to children and adults with disabilities.

In 1990, the passage of the Americans with Disabilities Act granted full public access to individuals accompanied by service animals, recognizing that these dogs undergo rigorous training and are not pet dogs. They are trained on specific work or tasks that assist their handlers to better cope with a disability or medical condition.  Dogs can also be trained to anticipate an oncoming seizures detect low blood sugar due to diabetes, assist with flashbacks and nightmares caused by post traumatic stress disorder, or, in the case of former IU student Michelle Lazar, provide balance and stability while walking due to a brain injury. All of these diagnoses are invisible, and yet every day, dogs are being trained to better the lives of the people who live with them. Michelle was in her sophomore year at IU in the fall of 2011 studying neurological rehabilitation when she suddenly collapsed at her internship at Bloomington Hospital. Doctors discovered an arteriovenus malformation, (AVM) or a tangle of blood vessels within the brain that diverts blood supply from the brain tissue directly to the veins. Michelle suffered a stoke and missed the spring semester. “I was in the hospital for six months,” she said, “and I had to have my mom do everything for me, which was really annoying. I knew I wanted to get back to IU and we didn’t even know if that was going to be possible, but I knew I had to try. I knew I had to push myself, so, my doctors recommended getting a service dog.”

Michelle’s next-door neighbor’s cousins train service dogs for people with mobility issues. Lazar applied to My Angel With Paws and later flew to Deland, Florida to meet Cricket, a golden retriever specifically trained for walking assistance and to provide stability for Michelle on stairs. She and Cricket were matched in May of 2012 and went through a two-week training camp together at the facility and then went back to IU in August.

“My experience at IU was really great. Cricket made it easier for me to be social because people would see her and then automatically start talking to me.”

Michelle’s, who, before she was initially matched with Cricket was using a cane to get around said, “I didn’t have that many friends at IU from the summer and there would be fire alarms in the middle of the night at Smallwood and I would have to get myself out and down those stairs all by myself.” But she says once Cricket came into her life things became “so much easier. She gave me back my independence by helping me to get back to Indiana. Cricket never leaves my side. She makes me feel safe. I know I’m not alone anymore.”