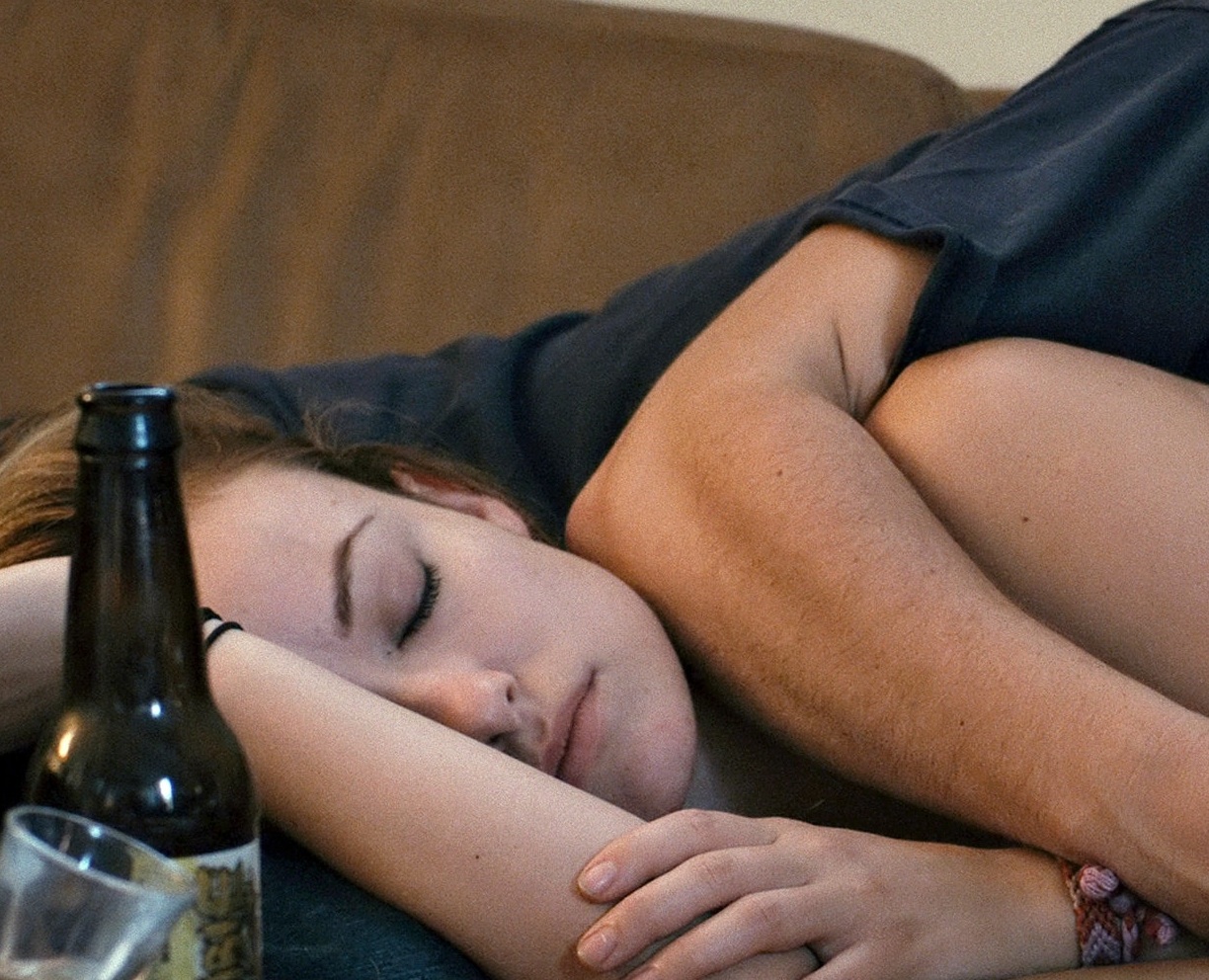 A Sampling Of The Microbudget Maven’s Work ◆ by Craig J. Clark

[Joe Swanberg will introduce his new film, Drinking Buddies, on October 24 at the IU Cinema.]

No matter what anyone thinks of his work, the last thing Joe Swanberg could be accused of is laziness. The auteur behind the new comedy/drama Drinking Buddies, Swanberg has spent the past decade turning out films at a pace unheard of since Rainer Werner Fassbinder’s heyday. In the past three years alone he has written and directed ten features, many of which he also photographed, edited and acted in. In between he contributed a short to the horror anthology V/H/S and has acted in at least ten other films, including Adam Wingard’s home-invasion horror film You’re Next (which, like Drinking Buddies, will be screening at the IU Cinema in October). When he was just starting out, though, Swanberg kept to the much saner schedule of one film per year, the earliest of which dates back to 2005. That was when he co-wrote, produced, directed, photographed and edited Kissing on the Mouth, in which he also played one of the four leads. That’s a lot of hats for a first-timer to wear, but if there’s any filmmaker who embodies the D.I.Y. spirit, it’s Swanberg. Not yet 24 at the time of his debut, Swanberg cast himself as the roommate of rudderless college graduate Kate Winterich, who drifts into a physical relationship with her photographer ex-boyfriend (Kevin Pittman) but has no plans to get back into a relationship-relationship with him. This we know because she confides in her best friend (Kris Williams, soon to become Mrs. Swanberg), who lets slip that they’ve been seeing a lot of each other. As a matter of fact, we get to see quite a lot of everybody in the cast since Swanberg has something of a no-nonsense approach when it comes to shooting sex scenes. The result is a film that feels incredibly voyeuristic and even borderline pornographic at times, but that’s one way for a low-budget independent to stand out in a crowd.

For his follow-up, Joe Swanberg co-wrote, produced, directed, photographed, edited and starred in LOL (2006), a film about the myriad ways modern technology can sabotage a relationship. Among its case studies are Kevin Bewersdorf, a musician who books a nonexistent tour of the Midwest so he can attempt to hook up with a girl he’s only talked to online, his friend Swanberg, who finds it next to impossible to end a conversation on the phone or online, and his friend C. Mason Wells, who’s visiting from out of town and fields a number of calls from his absent girlfriend. The women in their lives (who in most cases would be justified in wringing their necks) are Brigid Reagan, who is becoming disenchanted with Swanberg because he pays more attention to his computer than he does to her (he doesn’t even notice when she undresses right in front of him), Wells’s off-screen girlfriend Greta Gerwig, who is only heard over the phone and seen in grainy camera phone pictures, and Tipper Newton, a girl who meets Bewersdorf at a party and unwittingly facilitates his Internet hook-up. I expect it goes without saying that few love connections result from these interactions.

After playing a marginal role in LOL, Greta Gerwig vaulted into the lead with Swanberg’s Hannah Takes the Stairs (2007), which the two of them co-wrote with Kent Osborne. In it, she stars as a recent college graduate and aspiring playwright who’s marking time by interning at a Chicago-based production company. At the start of the film she’s seeing an aimless slacker and frustrated musician (Mark Duplass, a director in his own right), but it isn’t long before they’re broken up and she’s on the rebound. Rather unwisely, she rebounds with one of the company’s in-house writers (Andrew Bujalski, also a director), whose potential book deal for his personal blog is distracting him from the television pilot he’s supposed to be writing with Osborne. Then the chronically dissatisfied Gerwig drops Bujalski and takes up with Osborne, which is where the film leaves her, but there’s no guarantee that their relationship is going to be any more lasting. Greta Gerwig With Mark Duplass In “Hannah Takes The Stairs”

Next up for Swanberg and Gerwig was Nights and Weekends (2008), which is pretty much the definition of a two-hander since they not only co-wrote and directed it, but save for a handful of scenes, they’re just about the only actors who appear onscreen. To some, that might seem like the height of narcissism, but they don’t exactly show themselves off in the most flattering light. A couple in a long-distance relationship, they’re floundering because they don’t get to spend enough time together and when they are in the same time zone there’s tremendous pressure on them to make what little time they have count. Minor disagreements blow up into major arguments and moments of intimacy are reminders of how much really separates them. Anybody who’s been in that situation should be able to see the writing on the wall long before they do.

While Gerwig moved on to supporting roles in Ti West’s The House of the Devil and Noah Baumbach’s Greenberg, Swanberg stayed in his groove, writing, directing, photographing and editing Alexander the Last (2009), his fifth feature in five years and one that was actually produced by Baumbach. It’s about a married actress (Teeth’s Jess Weixler) who’s cast in a provocative play opposite a hunky actor from Tennessee (Barlow Jacobs) who makes her think about straying from her musician husband (Justin Rice) while he’s away on a tour. She sets Jacobs up with her photographer sister (Amy Seimetz), possibly in the hopes that it will make him unavailable, but their director (Jane Adams) and playwright (Josh Hamilton) seem intent on making rehearsals as uncomfortable as possible for all of them.

Uncharacteristically, 2010 came and went without a new film from Swanberg, but he made up for it in a big way by releasing six in 2011 (some of which are easier to track down than others). The first one out of the gate was Uncle Kent, which he wrote and produced by Kent Osborne, who essentially stars as himself. An unattached animator (his actual credits include such shows as Adventure Time and Spongebob SquarePants) who’s just turned 40 and has trouble maintaining relationships, a typical day for Osborne is spent hanging around with his musician friend Kevin Bewersdorf, playing with his cat, smoking pot, and talking to strangers on Chatroulette. He breaks his routine, though, when he plays host to a visiting journalist half his age that he met online.

Ostensibly in town for a meeting, which she has extended to an entire weekend hanging out with Osborne, visitor Jennifer Prediger has no illusions about their chances of hitting it off as a couple since she already has a boyfriend back in New York, but that doesn’t prevent her from doing things with him that could be construed as leading him on. Starting with a kiss, which they only do for the benefit of an anonymous guy playing with himself on Chatroulette, they soon progress to comparing their masturbation techniques and responding to a Craiglist ad posted by a woman looking for a three-way (Josephine Decker). It’s when he tries to get some two-way action going that Osborne gets shut out, much to his frustration.

2011 also saw the completion of Swanberg’s long-gestating Silver Bullets, which was an unusually protracted production for him. Shooting began in late 2008, and he didn’t complete the film until just before it premiered at the South by Southwest film festival. Furthermore, he essentially shot and edited two different versions of the film before settling on a story that satisfied him, a sure sign of artistic growth. Instead of being the straightforward werewolf film that its title suggests, though, it revolves around a young actress who gets cast in one.

Kate Lyn Sheil stars as the actress in question, who’s thrilled to be playing the younger version of Jane Adams, an insecure actress who shares the prologue – and her worries about putting on weight – with Larry Fessenden (who later auditions for a role in the werewolf film). For her part, Sheil’s relationship with her boyfriend (Swanberg, playing a frustrated filmmaker) deteriorates after he casts her best friend (Amy Seimetz, also the film’s producer) as his girlfriend in the low-budget drama he’s shooting concurrently with her film. Meanwhile, Sheil’s director (Ti West, essentially playing himself) clumsily puts the moves on her, which she’s slow to rebuff. Even if they go no further than a little kissing on the mouth, the damage has been done.

If Silver Bullets is relatively chaste by Swanberg’s standards, he went in the complete opposite direction with Autoerotic (2011), which may very well go down as his most sex-obsessed film yet. Co-directed with Adam Wingard, the film is broken up into four parts, which Wingard, Swanberg and their co-writer Simon Barrett populate with couples with all kinds of emotional baggage and sexual hang-ups. In the first, Lane Hughes plays a guy who’s so fixated on the size of his penis – which, for the record, is fine by girlfriend Amy Seimetz – that he sends away for enlargement pills and is so happy with the results that he abruptly breaks things off with her so he can play the field. Next up, Swanberg plays a guy who has very specific ideas about how sex with his girlfriend (Kate Lyn Sheil) should go, which may or may not have anything to do with her subsequent overwhelming urge to masturbate constantly. When she confides in a friend (Chris Hilleke), she recommends autoerotic asphyxiation, which doesn’t seem like the safest solution, but at that point Sheil is game for anything.

Being game is also at the heart of the third segment, in which a very pregnant Kris Swanberg finds she can no longer achieve orgasm, which makes her husband (Frank V. Ross) feel inadequate. When a girlfriend (Josephine Decker) offers to help out, Ross thinks he’s in for a three-way, but the girls have other plans. Then, in the final segment, Wingard plays a sleaze who masturbates furiously to the sex tapes he made with his ex-girlfriend (Rosemary Plain), who calls him up out of the blue so she can pick up the last of her stuff, but what she really wants is for him to delete “those movies” since she’s getting married. Wingard isn’t inclined to do anything so selfless, though.

The anthology format carries over to the found-footage horror fest V/H/S (2012), which exposed Swanberg to an entirely new audience (his roles in Ti West’s Cabin Fever sequel and Adam Wingard’s A Horrible Way to Die notwithstanding). It helps that he contributes to two of the segments, first as an actor in West’s “Second Honeymoon,” in which he and his wife (Sophia Takal) videotape themselves on a tour of the West and have some scary nocturnal encounters with a masked stalker. He then takes the reins of “The Sick Thing That Happened to Emily When She Was Younger,” which is presented as a series of Skype video chats between a young woman (Helen Rogers) who worries that her apartment is haunted and her boyfriend (Daniel Kaufman), who worries when she starts acting erratically and tries to keep her calm until he can come visit. Apart from its unnecessary twist ending, “The Sick Thing” is one of the best parts of V/H/S, leading one to imagine what Swanberg could produce if he tried his hand at a full-on horror feature. It’s certainly something he should ponder the next time he’s out drinking with his buddies.