The Covered Bridges of Parke County 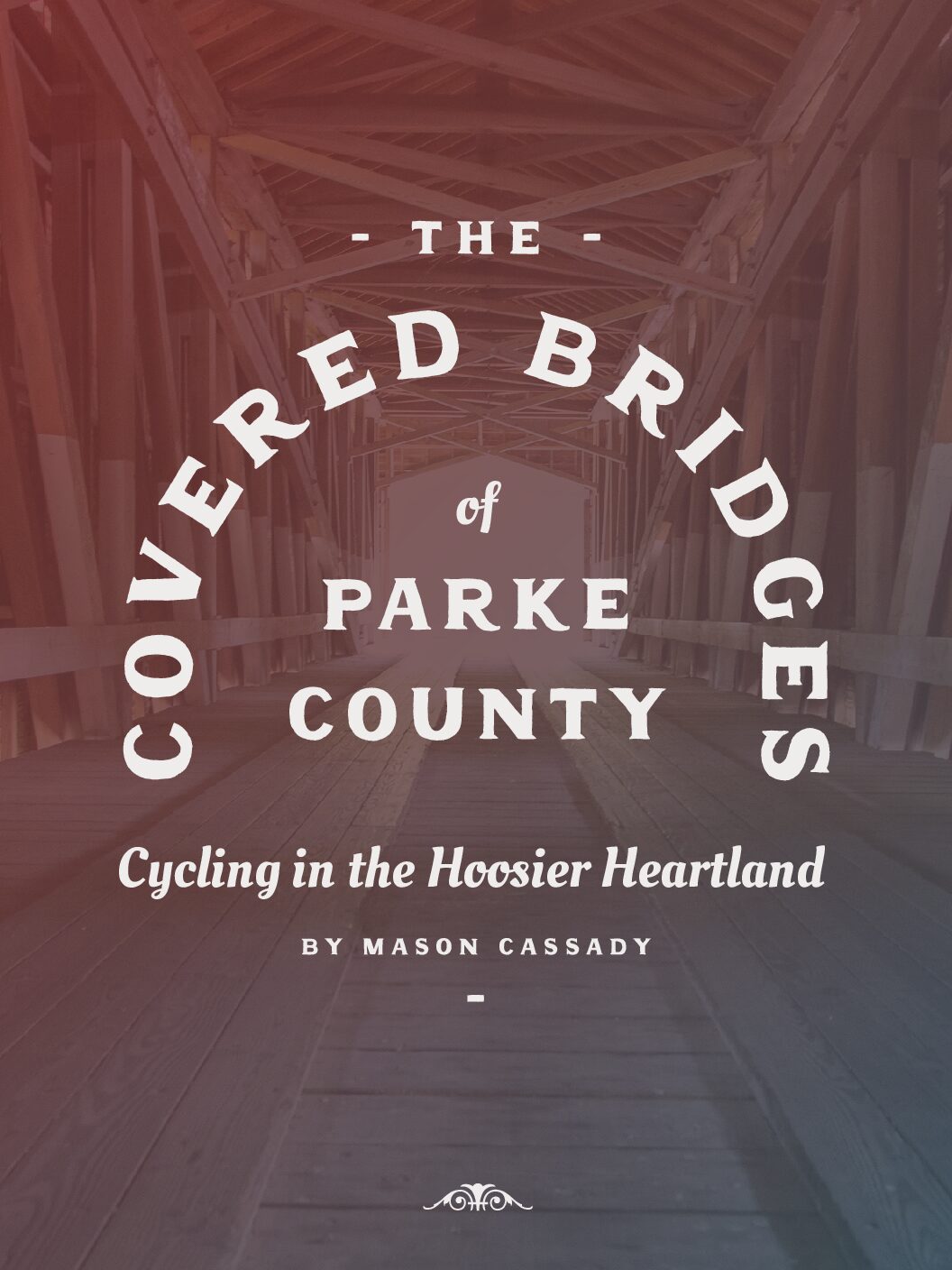 Cycling in the Hoosier Heartland

Sometimes I wonder, what does it mean to be a Hoosier?

Perhaps a futile question to ask as there is certainly more than one answer. Hoosier-ness could be found in a variety of things: Teeth-deep in the flavors of sweet corn off the cob on a summer night. Skippin’ rocks with a pal at your favorite local swimmin’ hole. It could be experienced in the hot mess of the Indy 500, chock-full of Budweiser and fried food. Maybe it’s seen in red barns on a backroad in autumn. Or it could be found in a forest hike searching for morels or chanterelles. Maybe it exists in the fruit of pawpaw and persimmon trees.

One avenue down Hoosier lane is Parke County, Indiana, the uncontested Covered Bridge Capital of the World, where a whopping 31 covered bridges stand today (Putnam County with nine is the second highest in the state). With such a large number of historic bridges in Parke County, it only makes sense to hold a Covered Bridge Festival every year. As leaf-peeping season takes off in October, visitors from around the world flock to Parke County. To my surprise, organizers say that the festival attracts up to 2 million annual visitors. As with much else in the year of COVID-19, the festival (which would have been the 64th) has been cancelled. That said, the bridges are still open to those who would like to make their own trip.

In my quest to uncover more qualities, character, and sentiments of being a Hoosier, I drove northwest from Bloomington with my bicycle in tow to tour this little corner of Indiana. Along the way, I visited restaurants and bars, talked with locals, camped at parks and perused antique shops in hopes of finding more answers to a uniquely Indiana question: What in the heck does it mean to be a Hoosier?

I arrived at Rockville, the recommended starting point for visitors. The county seat, Rockville is smack-dab in the heart of Parke county. The population is roughly 3,000 people and the layout includes an attractive town square, a picture-worthy limestone courthouse, a handful of eateries, antique shops and the historic Ritz Theatre. Rockville is home to the Old Jail Inn, where guests can Spend The Night Behind Bars. Nine cells have been turned into guest rooms named after fabled criminals such as Jesse James. Below the cells is the Drunk Tank Winery, where guests can do as the title says in their pseudo night in jail.

First on my to-do list was to pick up a color-coded map at the Rockville Visitor Center. Some route planning for my bicycle bridge odyssey was in order, so I went to the Thirty-Six Saloon, a local biker bar for grub and while I looked at the map. I sat in the Hog Pitsection, an offshoot of the main restaurant. Nascar memorabilia, taxidermy and neon signs lined the walls. I asked the bartender what he likes, and he said “I’m all about that Biker-Babe burger, which is topped with brisket, pepper jack, fried onion straws, fried pickles, all smothered in BBQ sauce…” I replied, “you had me at Biker-Babe, I’ll take that and a Budweiser.” I was tempted to order an appetizer called Hog Turds but I don’t think I would have lived to tell this story. As I devoured the burger, the luscious lyrics of Cardi B in the song WAP poured out through the speakers while a boozed-up biker chick danced her boots off in the middle of the bar. I reveled in the moment as I thought to myself, if I could choose to be anywhere in the world right now, it is right here. As I finished my WAB (wet ass burger), I found home for the night at a campsite within the Rockville Lake Park, a 400-acre facility just a couple miles from the town square.

My Routes: sections of Blue, Yellow and Brown

Soon after I woke up from camping, I needed fuel for the road ahead. Coffee and donuts were the first obvious choice so I ventured down to Wheelhouse Donuts right away. I follow a basic American donut shop principle: never order just one and so I went glaze, Maple Nut, and the Cereal Special (Vanilla cake donut, strawberry icing, fruity pebbles). One hot cup of creamy coffee to wash it down and I was off like Dorthy in the Wizard of Oz, singing and pedaling to discover the bridges of Parke County. Most visitors of the Covered Bridge Festival travel by car, some by motorcycle and few go by bicycle. I am one of those few.

My first day consisted of exploring bridges north of Rockville and so I cycled on the Blue Route on Marshall Road. As I biked along country roads, between fields of corn and soy, it gave an image of scenes from Bloomington’s cult classic film Breaking Away. As a cyclist in a car-centric country, I felt a bit like Dave Stohler, the main character who is obsessed with Italy and at odds with his traditional father. In this situation, I as the young bicycle rider and Parke County as the traditional, conservative, “my way or the highway” father figure. (Makes sense?)

Within an hour, I found myself at the first covered bridge on my route: Narrows Bridge. This bridge stands above Sugar Creek on the eastern edge of Turkey Run State Park. Built in 1882, it is considered by many the most scenic of them all. I walked about the bridge and peered out through windows with a nice view of sugar creek. Families in kayaks and canoes floated down the river one by one, giving me another activity found in the Hoosier way.

Westward ho, I biked alongside Turkey Run State Park on IN-47. This is a beautiful stretch of road where the initial signs of autumn ignited leaves on throughout forest foliage and gave way to yellows, oranges and reds. As if covered bridges weren’t enough to bring you to Parke County, the addition of fall colors at festival time round out the experience. Can I get an amen? Or, actually, I’ll just take a Pumpkin Spice Latte from my neighborhood Starbucks.

Not far away, I reached two more bridges, Cox Ford and Wilkins Mill. I gave a quick glance at the two bridges and creeks below. Interesting as they were, I gave more time for a favorite Hoosier pastime: searching for pawpaws. Colloquially known as the Indiana Banana, are unique in that they are the only member of their plant family growing outside of the tropics. Out of luck on the fruit hunt, I pedaled forth into a sunny Hoosier day.

As I approached the small town of Sylvania, I took a left to go south where the Yellow and Blue routes join. A couple miles down the road and I was at Jackson Bridge, the longest single span covered bridge in Indiana. This bridge is painted white while many bridges are painted red. If that doesn’t knock your socks off, I don’t know what will. From there, I continued cycling and found myself at the West Union bridge, which is the longest two span covered bridge in Parke County at 315 feet.

Around lunchtime, I neared the town of Montezuma which is named after the last Aztec emperor of Mexico. I was in need of food and drink so a quick look at the map, and I found a place called Bar Cooler Pub & Grill, just across the Wabash river in Vermillion County. As I swung the doors open, it was as if time reversed with my steps into the tavern. Four older men playing billiards looked at me with a “who’s this guy” facial expression as I found a seat at the end of the bar. Dark and reeking of tobacco smoke, the barkeep said, “Whatcha havin’?” I looked up and down the fridge and replied “Give me a Miller High Life.” I began to look the menu over while a middle-aged man seated next to me gave a rundown of the menu items. Head-to-toe in a Trump hat, camo shirt and jeans, the guy was very friendly which caused a slight short circuit in my brain due to the arrogant and gut-wrenching behavior of the guy on his hat.

Among catfish and other things, I chose a classic Hoosier sandwich: the pork tenderloin. And in typical Hoosier fashion, the pork was about as round as a volleyball with a bun the fraction of the size. As I inhaled the sandwich, the man and his friends told me about the Newport Hillclimb, another popular festival in the region. From my understanding, the event consists of classic cars racing up a hill. My bar mate bought me another Miller High Life, and I teetered back to my bicycle to ride 10-some miles back to Rockport.

Along the way, I came across Melcher bridge on Strawberry road with three other names: Klondyke, Marion and Leatherwood.