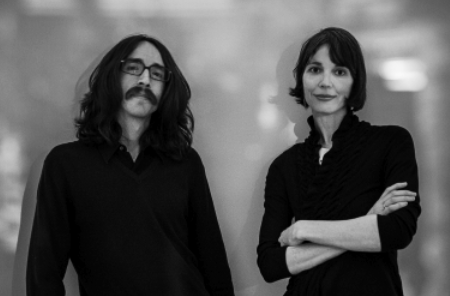 The Film Art of Sandra Gibson, Luis Recoder and Olivia Block at the IU Cinema ◆ by Joan Hawkins

Joan Hawkins is an Associate Professor in the Department of Communication and Culture at Indiana University Bloomington. She is the author of Cutting Edge: Art-Horror and the Horrific Avant-garde (2000; University of Minnesota Press) and numerous articles on horror, experimental and independent cinema. She is currently working on a book about the New York Downtown Movement.

In this increasingly digital age, film as a medium seems doomed. But despite the difficulty of obtaining, processing and projecting film stock, a number of artists and filmmakers stubbornly cling to the film medium (celluloid) as an inexhaustible source of beauty and wonder. With their groundbreaking work in the realm of “expanded cinema,” Sandra Gibson and Luis Recoder have emerged as two of the most inspired and inventive of these cinema artists. Since their first collaboration in 2000, they have produced numerous installations and performances that make full use of the optical and mechanical qualities of film projection. Employing 16mm and 35mm film projectors, celluloid strips, prisms, deviation lenses, manual interventions and gesture, they create elusive and hypnotic light sculptures, which transform the projection room into a sensual three dimensional space.

Historically, “expanded cinema” meant that celluloid film was just one means among many of producing “cinema.” The term was first used in the 1960s, notably by experimental filmmakers Carolee Schneemann and Stan Vanderbeek to refer to multimedia performance. By the 1970s “expanded cinema” had come to stand for a kind of media melting pot. As Gene Youngblood theorized it in his 1970 book Expanded Cinema, it had three goals. The first was to blend all art forms, including film, into multimedia and live action events. The second was to explore electronic technologies and the coming of cyberspace, as it had been described by Marshall McLuhan. The third was to break down the barriers between artist (or art works) and audience through new forms of participation.

But as new media began increasingly to displace or replace traditional forms (like celluloid) the term “expanded cinema” took on a different—some would say counter-intuitive—meaning. Contemporary expanded work, like Gibson and Recoder’s, restores the materiality of film to the center of cinematic practice. In opposition to the earlier melting pot idea, it draws sharp distinctions between film and other, newer, moving- image technologies. It is still an “expanded” cinema because it preserves the notion of participation and it foregrounds the processes by which film images are created. Filmmakers perform with multiple film projectors, films and film loops, and with light itself. They use gesture and lenses to bend light, to refract it. In so doing, they “expand” cinema from a two (or even three-dimensional) image in front of the viewer, and turn it into a three-dimensional, all-encompassing, wrap-around experience.

Gibson and Recoder began collaborating as Gibson+Recoder shortly after meeting in 2000 at the International Film Festival Rotterdam. “You could say that a certain enthusiasm for ‘found-footage’ brought us together,” Sandra Gibson notes, “as each of us were working with ‘archival’ material before hooking up.” Since “hooking up,” however, they operate as a unified entity, using a joint CV (curriculum vitae) to sum up their work,. And they gently resist talking about the shows and exhibits they had as solo artists early in their careers. In writing this article, I was not able to find any information about their pre-collaboration period. And my inquiries about their pre-collaborative careers brought patient reminders that the collaboration is what is important here. In an era saturated with computer generated imagery, Gibson and Recoder are able to achieve an amazing array of effects using only analog technology. Indeed, many of the performances unfold as a kind of illusionism, and indulge visual pleasure in a way that earlier forms of expanded cinema did not. The artists manipulate projectors loaded with abstract, handmade film loops. Simple acts such as slow or subtle changes in focus, slight movement of the projectors, manual interference with the projector beams create a surprising array of visual effects, and audiences frequently ask the artists how they manage to create such stunning imagery with such “old-school” technology.

Gibson calls the process of adjusting to analog special effects “natural projection, because it’s a soft-focused image. When people come in, it takes time for their eyes to adjust. They come in expecting this kind of Technicolor HD image and then they’re challenged to figure things out and have an experience.” “They have to work and kind of explore,” Recoder adds. “It’s almost like giving them a found footage element to work with. Each individual has kind of a viewing apparatus built-in and it adapts differently. Our work addresses the uniqueness of one’s own viewership.”

Gibson+Recoder have won a number of prestigious prizes for their groundbreaking work. In 2001 they won a Helen Bing Fellowship and participated in the Djerassi Resident Artists Program. In 2003 and again in 2006, they won the Museum of Contemporary Cinema Foundation Award in Paris, France. In 2005, they won the Japan-U.S. Creative Arts Fellowship Award (JUSFC/NEA) and participated in the Youkoba Art Space Tokyo. They have also won the Kodak Fellowship Award (2009), the New York Foundation for the Arts Award (2004), and the James D. Phelan Art Award in Film (2004). Most recently they were nominated for the Alpert Award in the Arts (2012).

In addition to residencies in Japan, Paris, and Bellagio Italy, they have performed and exhibited throughout Europe and Japan; they were chosen for the 2004 Whitney Biennial and took their work New Frontiers to Sundance in 2009. As Recoder puts it, in all of their exhibitions, they blend the formal vocabulary of art and cinema. “We use the cinema or the cinematic to go to an earlier stage: to imagine what its like to go and sit and observe a moving image; an image that’s actually being formed right before you.”

Aberration of Light: Dark Chamber Disclosure is a live collaborative cinematic work that reflects Gibson and Recoder’s research on light as optical illusion. It revolves around the light play of two projectors, fractured and dispersed by a series of lenses. The performance exploits the intrinsic properties of the “changeover” system, which is used in film theaters to ensure the smooth transition from one film reel to another (so when viewers watch a movie in a theater setting, they do not notice when reels change). The result is a stimulating game of illusion and disillusion. As Gibson describes it, “in ‘Aberration of Light’ we perform an undisclosed work of feature length found-footage film. Our working concept is that the 35mm changeover system undergoes its re-appropriation as a collage/montage technique of sorts.” In their promotional material, Gibson+Recoder call it “a surrealist dream from the point of view of the projectionist.

This is the second project that Gibson and Recoder have created in collaboration with Chicago-based Olivia Block, whose sound work seeks to examine and redefine the limits of cinematic experience. Block began her career as a pop musician until she turned to field recordings in the 1990s. Since then she has developed a unique musical language, in which she brings together refined textures of environmental material with raw noise and elegant sound architecture in which wind instruments are predominant.

The Jorgensen Lecture will take place at 3:00 p.m. at the IU Cinema. The performance, Aberration of Light: Dark Chamber of Closure, will be presented at the Cinema, with live sound accompaniment by Olivia Block. The performance will take place Friday August 30 at 6:30 p.m. These events are presented as part of the Underground Film Series, in partnership with the Indiana University Department of Communication and Culture, and Film and Media Studies. They are free but ticketed events, open to the public.

This will be a unique opportunity to see a live cinematic event that can only be performed at theaters with expanded technical capacities. Previous live 35mm projector performances of Aberration of Light include the prestigious Toronto International Film Festival, Conversations at the Edge at the Gene Siskel Film Center in Chicago, Serralves Foundation in Porto, and Courtisane Festival in Ghent Belgium. Ticket information at the IU Cinema website.