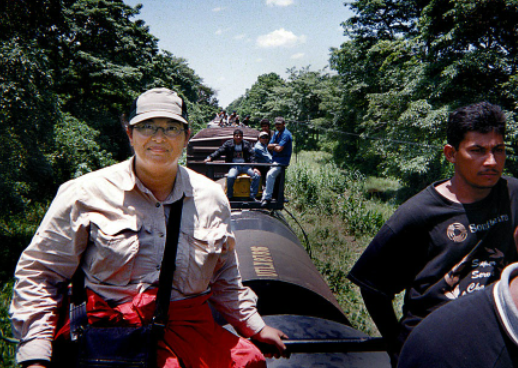 [Sonia Nazario’s appearance April 16 at the Buskirk-Chumley Theater is sponsored by the IU School of Journalism Speaker Series.]

In Honduras, and throughout Central America, the United States is referred to as El Norte. There is promise and hope in this simple title, fittingly so because every year adults and youths in Central America chase after that hope, trying their hand at reaching El Norte. They leave behind their families, sometimes even their children. They face down bandits, dishonest smugglers, corrupt police, and the trains themselves—the cause of countless deaths and disfigurements.

When he was five, Enrique’s mother left him and his sister in Honduras, recognizing that the only way she could provide for her family was by immigrating illegally into the States, finding work, and sending money back.

Sonia Nazario’s book, Enrique’s Journey, goes to great lengths to tell Enrique’s story. For more than twenty years Nazario has reported on social issues ranging from hunger, immigration, and drug addiction, but her work here is not merely a retelling but a reliving of Enrique’s journey; Nazario herself took the same journey as Enrique, retracing his steps in order to retell his story. Nazario’s initial reporting on Enrique, which appeared in the Los Angeles Times, won her the Pulitzer Prize for reporting in 2002. The book’s accompanying photographs by Don Bartletti won him the Pulitzer Prize in 2003. She will speak at 7 p.m. Wednesday, April 16, at the Buskirk-Chumley Theater. The talk is part of the IU School of Journalism’s Speaker Series and is free and open to the public.

In part, the book deals with Enrique’s journey to understand his mother’s decision, but the greater journey is the one Enrique makes when, at 17, he decides to leave behind his pregnant partner, travel to the States, and reunite with a mother he hasn’t seen in twelve years. This journey is 1,600 miles, and is accomplished predominately through Enrique riding the tops of trains along what is called called El Tren de la Muerte (The Train of Death.)

[Image at the top of this post: Sonia Nazario riding a train through Mexico.]

It’s only on his eighth attempt (and in his seventh pair of shoes) that Enrique finally crosses the border into the United States. But what is truly incredible about Enrique’s journey is that he wasn’t alone in attempting it, that hundreds of thousands of Central Americans attempt to reach—often unsuccessfully—El Norte. Enrique’s Journey manages to not only tell Enrique’s story, but also the stories of so many of Enrique’s fellow travelers and those along the way who hinder or help their progress. The book captures so many facets of these lives, and in its less than 300 pages deals so thoroughly with issues of immigration, worker rights, family values, and the creation of identity, that at times Enrique’s story threatens to be lost in the larger scope of history and politics that informs it.

It’s a big risk, leaving Enrique behind for pages at a time to tell the reader about Padre Leo, the incredible priest who has turned his church into a shelter for the refugees—despite the wishes of half his congregation—and who allows Enrique to make the phone call that changes his life forever. By the end of the book the risk is worth it. Enrique’s journey doesn’t end when he hops off his last train, and it doesn’t end when he finally accumulates enough money to get ferried across the border, or when his mother pays the ransom and his smugglers send him to North Carolina and he finally reunites with her. In truth, his journey is one that never ends. It is a journey that only truly begins with the recognition that the past and its trauma cannot be forgotten, that it must be faced before healing can take place.

Called “the adventure story of the twenty-first century,” Enrique’s journey and the journey of thousands of other Central American refugees is an odyssey that never ends, an odyssey to bridge not just those gaps between us created by time and space but by abandonment and resentment, drug addiction and depression, inequality and injustice. It’s a journey to mend despite all that has torn one’s life apart.

And it is a journey not just for Enrique and not just for those who travel on El Tren de la Muerte. It is everyone’s journey: those who work toward reconciliation, those who perpetuate the failures of the past, and even those who ignore the fact that history is happening.

It is happening, and it is happening to all of us. As Padre Leo tells his congregation (which include many Mexicans who are resentful of Central Americans migrating into their country in search of a better life) “they, too, were once migrants. Saint Joseph was a migrant. The Bible was written by migrants. Running off a migrant…is like turning against yourself.”