Bloomington: One Puzzle Piece At A Time 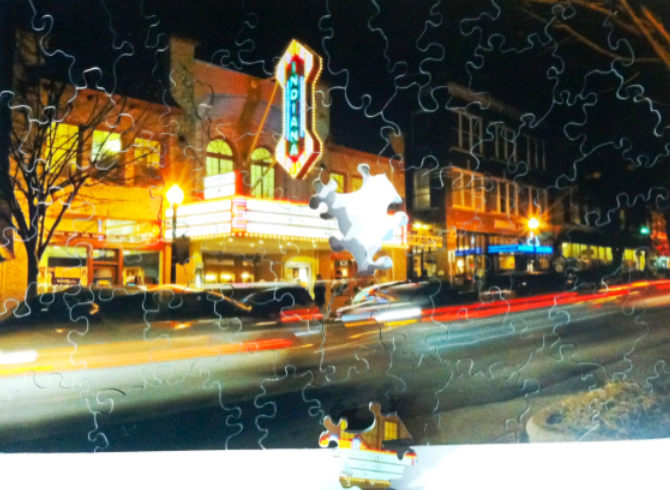 Bloomington’s Marc Tschida hesitates to call himself an artist, but his handcrafted jigsaw puzzles have caught the attention of the local arts scene. His puzzles feature images of downtown Bloomington and the Indiana University campus, drawing heavily from the work of local artists. “As a point of pride I’m just working locally right now,” said Tschida. “Mainly Bloomington-themed items. That’s what I’ve been specializing in.”

When he enrolled at IU at 19, the eclectic Bloomington arts scene exposed Tschida to a vibrant world he had never had access to growing up in Gary.

After two years of college, Tschida traveled to Alaska and worked on a fishing boat, spending thirty to forty days at sea at a time. The crew worked 18-hour shifts, seven days a week, to which Tschida attributes the growth of his patience and discipline. “The majority of time I stood in one place, at a conveyor belt sorting the catch. This extended period of time standing in one place concentrating on one thing, really has helped prepare me for what I do with the puzzles, standing at a saw for hours at a time manipulating the wood around a saw blade.” Marc Tschida At The Jigsaw

After Alaska, Tschida moved in and out of Bloomington through his mid-twenties, eventually calling it home “when I realized it was a sense of community drawing me back,” said Tschida. “By the time I was 26 I was helping define some of the cultural activities. I just feel blessed.”

Growing up, jigsaw-puzzling was a popular holiday pastime for Tschida’s family, so his affinity for puzzles is deep-rooted and linked to childhood memories. But it wasn’t until his adult life that he returned to the hobby. “I used to work in the music industry, so when I transitioned out of that line of work, my biological clock kept me up really late into the night,” said Tschida. “I did jigsaw puzzles to stay out of trouble.”

Tschida managed Second Story and Bullwinkles until both closed in 2006. “What started me on the arts was when I became a music photographer and my photos were used by Wilco’s Steve Harris.” Tschida crossed paths with the band when he roomed with the brother-in-law of Max Johnston, one of the band members. Oftentimes Johnston would crash at Tschida’s place when Wilco wasn’t on tour.

But his involvement in the local arts doesn’t stop in the music industry: Tschida also served as the performance and technical director for the Waldron Arts Center as well as general manager of the Cardinal Stage Company–both positions that he held for three years–and continues to volunteer at WFHB. “One of the advantages I’ve had is experiencing about every perspective you can imagine in the music field and entertainment field,” said Tschida. “I got to a point where I was talking to people as a human as opposed to a fan.”

Tschida first conceived of creating his own jigsaw puzzles in 2005, but it wasn’t until 2012, a wait “due to time and confidence,” that he was able to begin learning more about the craft when he recognized a potential market for Bloomington-inspired souvenirs. Tschida’s incentive for the project came from a holiday exhibit at the Waldron Arts Center that called out for local artists. “I felt that there was room for a high quality Bloomington memento craft item, and it was a couple years later that I combined that idea with my enjoyment of jigsaw puzzles.”

As a kind of jigsaw puzzle town troubadour, Tschida uses his puzzles to express his admiration for the  Bloomington arts scene. “When I say these are Bloomington themed, I mean performance arts groups, Bloomington visual arts work, iconic Bloomington images.”

Tschida has been collaborating with local artists, using their pieces of art as images for his puzzles; he describes himself a “manipulator of the image. . . .It’s so important to work with the artists, but the puzzle itself isn’t valuable. It’s the image that’s valuable.”

Tschida’s relationships with other artists and art organizations have granted him access to many of the images he uses in his puzzles, such as local graffiti and band flyers, including the flyer for Andrew Bird’s first show in town. As former manager of the Cardinal Stage Company, Tschida’s materials come from the theatre company’s recycled lumber. “Since I’ve worked in the arts in many capacities in Bloomington in the past fifteen years, it’s been simple to contact people in the community. I’ve generally worked with the artist Joel Washington’s art. I think [the pieces] would lend themselves very well to a super limited edition of puzzles.”

Collaborating artists sometimes share in Tschida’s profits, but he works on a case-by-case basis. But since he’s just getting the ball rolling, many artists are happy to let him just “run with it.”  Alas, it seems his time supporting and working for the arts has roped him into the world of creation. “It’s a blast, I’ve always been a facilitator of the arts, so this is my first foray into being on the other side.”

Whether he considers himself one or not, the grueling process of crafting jigsaw puzzles requires the skill and patience of an artist. The “grizzly process,” as Tschida calls it, entails multiple steps for each puzzle. The first step involves securing the rights to an image (to avoid copyright infringement), and then printing that image on glossy paper that will be adhered to the wood. Once the image is sealed, Tschida uses a scroll saw to make the cuts in the wood, yielding the individual pieces of the puzzle. And here comes the tedium — he then finely saws the ends of every piece for an easy fit.

Having honed his skill at the scroll saw, Tschida is now producing unique puzzles with irregularly shaped pieces. For example, a puzzle depicting the Buskirk-Chumley features a center piece that looks like a dog bone to mimic the Indiana sign in front of the theatre. “I use a scroll saw with a hair thin blade that just goes up and down, so I maneuver the wood around the blade of the saw, allowing me to cut any shape I want.”

Tschida has cut about fifty different puzzles, each with a unique image. His largest puzzle has 280 pieces that fit together to display a local roller derby girl. Although a few are based on original art, most of the puzzles feature landmarks such as the Monroe County Courthouse, the Buskirk-Chumley, and views from the B-Line Trail. Tschida chooses images based on their aesthetic appeal and a high level of contrast. He plans to continue learning more about photography so he can work with self-shot photos of Indiana University such as the Jordan River.

The real sacrifice a handmade puzzle crafter like Tschida must make is one of time. Tschida admits it’s hard to put a price on his puzzles for all the energy poured into their construction, though he sells them for modest prices of about $20 to $30 per puzzle. “People are used to going to Walmart and buying a puzzle for $7.99, so they aren’t used to wood, handmade puzzles and their prices.”

The origins of jigsaw puzzle crafting dates back to the Great Depression when they were called “dissected maps,” and provided hours of entertainment at a cheap price. Conventionally, puzzle makers did not include a picture of the puzzle’s image, but Tschida likes the frame of reference, because, to him, it’s about the image as opposed to the puzzle itself. “Tradition states that you’re not supposed to know what the image is, that’s part of the joy, but I think that’s kind of bullshit.”

For Tschida, the image sells the puzzles, which he says are almost worthless without the image. He sees the human contact with the artist as invaluable. “There’s a buy-in with the image, which is why I’m focusing on Bloomington,” said Tschida. “You’re buying it for its connection to the town, it’s like a bottle of Oliver wine. I’m very much into the local shopping and economy. That’s what everything I’m doing revolves around.”

Recognizing a potentially collaborative opportunity to encourage “puzzle awareness,” Tschida hopes to reach out to IU’s Lilly Library, which currently hosts one of the largest collections of mechanical puzzles in the country.

Although their entertainment value may have lessened since the Great Depression, the market is still alive. For example, in 1974 family-run company Stave Puzzles was founded and still exists today, selling some of their puzzles for up to twenty-six thousand dollars. The national market for hand-cut wooden jigsaw puzzles sells individual pieces from one dollar to thirteen dollars.

Tschida plans to host a jigsaw tournament next spring, using the event to launch a new line of puzzles featuring the artwork of local artists, most likely Joel Washington’s art, his new focus for upcoming puzzles. For now Tschida is taking his business, officially named Press Puzzles, one step at a time. But his love affair with theatre has him figuring out how to marry his two interests.

“It’s the sheer amount of community involvement in theatre,” said Tschida. “I’m one man in my garage making puzzles, but the performance events bring the best of community out.”  Eventually he hopes to break into the national theatre scene, designing puzzles customized to particular productions. “That is part of where I’m heading towards, but I don’t have the capacity yet,” said Tschida.  “The next step is raising puzzle awareness.”

Tschida was able to place puzzles based on the Ghost Brothers of Darkland County into the hands of both Stephen King, a jigsaw fanatic, and John Mellencamp, as well as a puzzle to the Chief of Staff of the National Endowment of the Arts, Jamie Bennett.  “I’m beginning to get a lot of commissions too. For example, I’m making a puzzle with arrowhead-shaped pieces for a ninety-year-old as a birthday gift.”

But Tschida is still uncertain, perhaps you could say “puzzled,” about what the future might bring. “Whether or not this will ever become a career, I don’t know if that will ever happen, but time will tell,” said Tschida. “But my next weird career transition will be marine oriented. My next bucket list goal is to cage dive with sharks.”

[Marc Tschida’s Jigsaw Puzzles will be on display November 30th at the City of Bloomington Holiday Market; December 21st at the west side Half Price Books
on W. Susan Drive from Noon-5pm; and during a puzzle-making demonstration at WonderLab, January 3rd, 2014. His puzzles are on sale at The Venue Fine Art & Gifts and the Buskirk-Chumley Theater. The image at the top of this post is Tschida’s Buskirk-Chumley Theater puzzle.]