Alone in her room, dancing by herself in a windowless, barely furnished space, walls papered with vintage-feeling (80s-ish) pop posters , with her pixie-cut hair and striped shirt, the girl seems to be channeling Jean Seberg ala Godard, back when the nouvelle vague was still new. But when she dons the black chador to go out into the streets, prowling the menacingly empty desolate night spaces of her oil-industrial city, she becomes something else: a dark-clad vampire who mirrors the movements of her prey before her incisors snap forward like a switchblade and she goes in for her kill.

The black sweep of the chador, it turns out, its drape across the wearer’s back, the way it twirls in the night, is not unlike the classic Dracula cape. For director Ana Lily Amirpour, precisely that effect inspired A Girl Walks Home Alone at Night. As she explained the chador’s effect to the New York Times, “I put it on and I was like, ‘Oh, this is an Iranian vampire.’” And so she set her vampire loose on the dark, bleak streets of Bad City, an imagined Iranian oil town: chador’d women, Farsi street signs and license plates and speech, oil derricks pumping against the sky.

Play out the vampire tale with a broad range of intertextual nods (favoring that romantic vampire terrain: both Nosferatus, Hunger, Anne Rice, a touch of Lost Boys),  genre-blend with an assortment of Western motifs (less the white hat-black hat–well, save for that chador’s black–duel-at-dawn terrain of the old classics than Sergio Leone’s sense of Western spaces and a heavy dose of outlaw consciousness), film in black and white to echo that French New Wave reading of American film noir (that Alphaville/ Breathless range of Godard’s work especially key), for good measure make your male protagonist seem an Iranian reincarnation of James Dean, down to white t-shirt and jeans, the love of hot roadsters, a ’57 T-Bird here (because Giant, after all, was about an oil town, too), and you’ve got it: A Girl Walks Home Alone at Night, our first Iranian vampire Western.

Well, ok, let’s admit it: Iran via California. Amirpour grew up, after all, in Bakersfield, which she described for the New York Times as “like Footloose with a lot of Mexican gangs”; it is a small town not far from Bakersfield that she remade as Bad City. And her film-school years were spent in LA, which explains Girl’s heavily Hollywood intertextuality. The Farsi-speaking acting troupe has Californian roots as well, drawn from the state’s Iranian immigrant enclave, rooted in Iran’s post-revolution diaspora. Something Californian, too, shows in the way Amirpour’s vampire rides a skateboard.

But however Californian in sets and sources, A Girl remains steadfastly Iranian as well, in far more than the surface effects of chadors and Farsi. Above all else, in consciousness, the film reflects the character of contemporary Iran’s social order. In this respect, the film embodies that “unmooring of the Western” that Cynthia Miller and A. Bowdoin Van Riper discuss in their 2014 book, International Westerns: Re-Locating the Frontier. “The icons and themes of the classic American Western belong to a particular moment in U.S. history,” Miller and Van Riper argue, and it follows that “translating the genre across borders involves … reframing the issues that Westerns have traditionally explored.” Transporting the vampire genre across borders (or back across borders, in this case, feeding back to the orientalist roots of English-speaking vampires’ Byronic roots) similarly requires some reconfiguration. 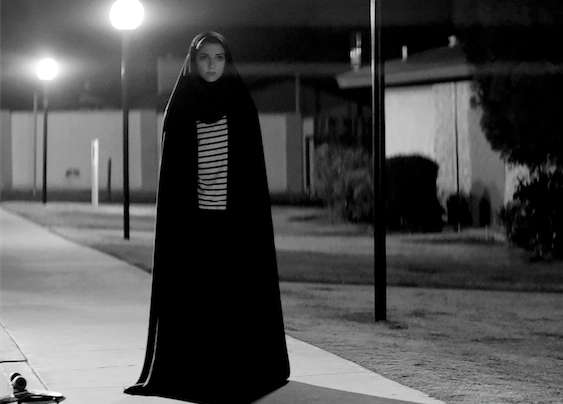 Scene From “A Girl Walks…”

Above all else, the Iranian consciousness of A Girl shows in the way cultural alternative spaces thrive under the theocracy’s repressive regime: underground. Just as Azar Nafisi, in his 2004 film Reading Lolita in Tehran,  recalls Western literature surviving sub rosa among secret circles of women, or just as a young Marjane Satrapi keeps track of Western youth culture, from Michael Jackson to punk, through secret circuits of circulation (as she recounts in her 2007 film, Complete Persepolis), so, in Amirpour’s film, the relative emptiness of the nighttime streets of Bad City find a counter in the spaces where regime-disapproved cultural forms continue to thrive: drinking, gambling, prostitution, drugs, Western music (and disco balls), all operating underground, in rooms unseen from the streets.

But when so wide a range of cultural expression are all forced underground, those secret spaces will tend to overlap and coincide. This is not utterly unlike the Hollywood vampire tradition; after all, in the classic Dracula, when the count arrives in the promiscuous city, his first bite comes from the city’s underworld of prostitution (that Covent Gardens flowergirl’s long-established secret second trade) before he moves up in society’s circles. But the difference in A Girl is that there is no place to move up to: society kids’ parties, djs and Ecstasy and all, remain as under the radar as, say, the streetwalkers. And the coinciding circuits of underground culture get embodied in the dealer/pimp (his tattoos the mark of his marginality, his chains and leather the signs of his connection to Western cultural forms, even if hyperbolic to the point of parody here), who manages the hookers and supplies the E to the party kids and manages the money for the backroom gambling).

But precisely that overlap also opens up the terrain for the vampire’s circuits of preying. The girl’s feeding choices moderately favor a feminist agenda of retributive violence, although occasionally veering toward the merely convenient. She depends, however, on the fact that cultural forms have been forced underground to keep her own patterns of preying secret. This essentially reverses the typical mode of Western vampirism, where concentrated urbanism (the city’s promiscuity) and its modernist modes (the whole New Woman trope of Bram Stoker’s foundational text) form the space for the vampire to thrive. In contrast, in Amirpour’s imagined Iran, the spaces of the city are vacated, and the vampire, like everything else, moves underground — at least until the girl meets up with Arash, the James Dean wannabe, and the film morphs again, but to say toward what would be giving away too much.