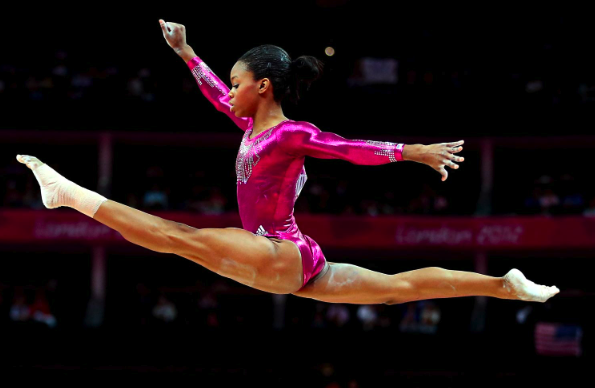 She was the young girl who kept our eyes glued to the screen during the 2012 Summer Olympics.  This month her life story premiered on the Lifetime channel. The Gabby Douglas Story depicts the experiences that led her to become the first African-American gymnast in Olympic history to win gold in both the individual all-around and team competitions. Sydney Mikayla portrays Gabby as a child and Imani Hakim from Everybody Hates Chris portrays her as an Olympic athlete.

Michael Swidler is an IU grad and a co-producer on the film. While in Bloomington he organized film festivals and directed and worked on many short films as well as radio and web-formatted television. After graduation he moved to LA, interned a few different places before taking a spot at Braun Entertainment Group as a development executive and assistant. James Stout spoke with him for The Ryder.

James Stout: Was The Gabby Douglas story always intended as a made-for-television film?

Michael Swidler: The made-for-television film medium is getting a resurgence; it might be the best medium for this story. Although when I watch it now and see how good it is, I think “Man, if only we had made this a feature you know? But I think as far as getting a movie made and getting a movie made fast — we wanted this to be made relatively quickly — it takes on the average about eight years to get a feature film made. This film was a pretty quick turnover, a little over a year.

Stout: What are you working on now?

Swidler: We’ve got some great projects lined up for both the small screen and the big screen. I’ve been with the company for three years and this is the first project we’ve gotten going although we’ve had a couple of close calls, but it’s kind of how the business goes. We have projects that have been in development for seven years. We have projects that we have the rights to, like remake rights to a horror classic which we’ve been trying to make for over 30 years.

Stout: How has your experience at IU helped in your professional career?

Swidler: I think for me at Indiana, we didn’t have a film major which was okay. You know it allowed me to have four years to discover what it is I wanted to do, and it forced me to be patient and go through all the trial and errors of trying to be a business student and then being in Telecom, and then going from there as far as what aspect of telecommunications and the media I wanted to work in. It taught me that in four years you can truly figure out if you focus hard and you work hard towards it and you experience things, internships, jobs and all that stuff that goes into a four year period you can accomplish, and that is figuring out what the heck you want to do with your life. I’ve been out here in LA just over four years and, I am very thankful that I got the job that I got and that I’ve been able to experience what I’ve been able to experience.

Stout: What was it that made you want to work in the film industry?