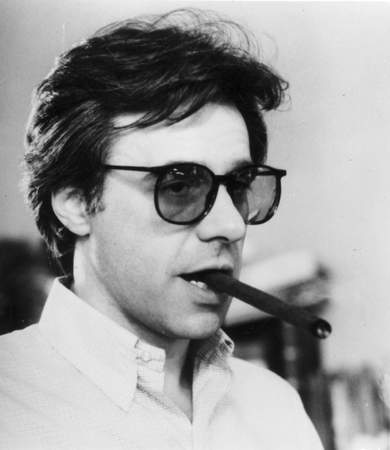 In the Vanguard of the New Hollywood ● by Craig J. Clark

In the lead-up to legendary film producer/director Roger Corman’s visit to Indiana University in April, the IU Cinema is presenting a series of double features by some of the more successful graduates of what is known colloquially as the “Corman School” of filmmaking. Their ranks include such luminaries as Francis Ford Coppola, Martin Scorsese, Jonathan Demme, Ron Howard, Joe Dante, John Sayles, and James Cameron, but the first one to really make a big name for himself in Hollywood was Peter Bogdanovich, who was eager to move from writing about films to making his own when he went to work for Corman in the mid-’60s.

Bogdanovich’s first job was as production assistant on 1966’s The Wild Angels, which found him filling a number of roles (including getting thrown into a melee with the actors playing bikers — and the bikers playing at being actors) and impressing Corman enough to earn him the opportunity to direct his first feature. Corman had just two stipulations: Bogdanovich had to use footage from Corman’s 1963 film The Terror, and he only had Boris Karloff for two days since that’s all the work the star owed Corman on an old contract. Bogdanovich quickly developed a story with his wife Polly Platt (with an uncredited assist from iconoclast director Samuel Fuller) about an aging horror movie actor named Byron Orlok who is retiring because the kinds of films he’s known for (like The Terror) no longer scare audiences. As a counterpoint, they also followed a disturbed young man named Bobby Thompson, patterned after Charles Whitman, who methodically gathers a cache of firearms — and it’s not so he can go deer hunting on the weekends. The result, 1968’s Targets, remains one of the best “calling cards” Hollywood has ever been presented with.

“I know they will get me, but there will be more killing before I die.”

The first half of Targets is a slow build as Orlok shirks off his responsibilities, alienating studio executives, his lovely assistant, and hot young director Sammy Michaels (played by Bogdanovich), who has written “a hell of a picture” for him. Meanwhile, Bobby (Tim O’Kelly) buys a high-powered rifle, drives past the refinery where he’s going to set up shop the next day, and spends a seemingly normal evening with his family. (When he gets home, there’s a commercial about the late-night movie on TV, which just so happens to be Anatomy of a Murder.) At one point, he goes to a shooting range with his domineering father and even gets the old man in his sights, but Bobby loses his nerve and gets dressed down for his lapse. No wonder he waits until the next day, when his father is at work, to start his killing spree, gunning down his wife and mother, as well as the grocery boy who picked a bad time to make a delivery. Boris Karloff and Bogdanovich on the set of Targets.

At about the same time Bobby is cleaning up his mess, Orlok and Sammy, who stayed up late drinking together, regain consciousness and Orlok reluctantly agrees to make the drive-in appearance. This is followed by one of the most harrowing sequences in the film. In broad daylight, Bobby climbs up to the top of a tower by the highway, lays out all of his rifles and handguns, and calmly starts shooting at the cars driving past. It’s only after police arrive on the scene that he flees, winding up at the drive-in theater, where he lays low waiting for it to get dark. Then, while The Terror unspools and Orlok waits to go on, Bobby begins firing at the gathered crowd, thus confronting the outmoded horror star with real-life terror. It’s a chilling climax no matter how prepared you think you may be for it. Bobby’s last line, after he’s subdued, is “Hardly ever missed, did I?”

“Won’t be much to do in town with the picture show closed.”

After the twin assassinations of Robert Kennedy and Martin Luther King, Jr., audiences weren’t prepared to embrace Targets when it was first released in 1968, but it went on to win a cult audience and the attention of Bogdanovich’s would-be peers. Some of the latter were Bob Rafelson, Bert Schneider and Stephen Blauner, whose BBS Productions bankrolled his 1971 follow-up The Last Picture Show, which probably would have taken home Best Picture that year if it hadn’t been for The French Connection. Based on the novel by Larry McMurtry, who collaborated on the screenplay with Bogdanovich, the film is best seen in its director’s cut (included in Criterion’s America Lost and Found: The BBS Story set), which adds some shading to its depiction of a small North Texas town in decline. With Shepherd On The Set Of The Last Picture Show

The Last Picture Show is the kind of film that changes depending on how old one is when they see it. If you’re college-age or younger, you’re more likely to relate to the characters played by Timothy Bottoms, Jeff Bridges, Cybill Shepherd and Randy Quaid. As you get older, though, identifying with the characters played by Cloris Leachman, Ellen Burstyn, Eileen Brennan and Clu Gulager will give you a much different perspective on the events in the film. Then there’s Ben Johnson’s turn as Sam the Lion (a powerful performance that earned him a well-deserved Oscar for Best Supporting Actor), who so thoroughly embodies the soul of Anarene, Texas, that a great deal of its life and vitality dies out along with him.

“I think a slight mistake has been made somewhere.”

How much enjoyment one gets out of 1972’s What’s Up, Doc? is almost entirely dependent on how much leeway you’re willing to give Bogdanovich to recreate a style of comedy that was already several decades out of date when he decided to take a swing at it. A romantic screwball comedy that’s chock full of door-slamming, suitcase-swapping, and identity-assuming, it pairs up Ryan O’Neal and Barbra Streisand as, respectively, a nebbishy musicologist in San Francisco for a conference and the born troublemaker who gloms onto him and refuses to let go. As exasperating as this is for the absent-minded O’Neal, it’s even more distressing for his high-strung fiancée (Madeline Kahn, making a whopper of a screen debut), who quickly finds herself displaced by the wily Streisand.

In the interest of making things as confusing as possible, screenwriters Buck Henry, David Newman and Robert Benton (working from a story by Bogdanovich) toss four identical plaid overnight cases into the mix that two sets of people are after for different reasons. (It all starts with one, though, which contains top-secret government documents that whistle-blower Michael Murphy plans to leak to the press. Sound familiar?) There’s also the intense competition for a $20,000 grant being awarded by young philanthropist Austin Pendleton, which O’Neal’s unscrupulous rival Kenneth Mars aims to steal out from under him, and Randy Quaid returns from The Last Picture Show as a fellow musicologist watching from the sidelines. As one might expect, the whole shebang culminates in a madcap chase up and down the hills of San Francisco that goes on for quite a while and lands everyone concerned in court, where everything finally gets sorted out. To hear O’Neal tell it, though, it’s just as convoluted as it ever was.

“Just because a man meets a woman in a barroom don’t mean he’s your pa.”

The roll Bogdanovich got on with The Last Picture Show and What’s Up, Doc? (still his biggest commercial success) continued with 1973’s Paper Moon, his second black-and-white period piece. Set in the Midwest during the Great Depression, it stars Ryan O’Neal as a Bible-peddling con man who’s saddled with a nine-year-old girl who may or may not be his daughter (played by Tatum O’Neal, who won the Academy Award for Best Supporting Actress for her troubles) when he drops by her mother’s funeral to pay his respects. His first instinct is to get her out of his hair by putting her on a train, but she has other ideas. Furthermore, she proves to be right invaluable when she inserts herself into his con, which targets the recently widowed.

Something of a chip off the old block (if, in fact, she is a chip off his block), Tatum is so great with figures that she knows exactly how much money they have at any given moment. She also knows exactly what to do when voluptuous dancer Madeline Kahn joins them on the road and is an immediate drain on their bankroll. Together with Kahn’s teenage maid (the wonderfully deadpan P.J. Johnson), Tatum hatches a devious scheme that succeeds in getting rid of Kahn, but there’s no returning to business as usual for the maybe-father-and-daughter team. Like What’s Up, Doc?, Paper Moon was photographed by László Kovács, who manages to make Depression-era Kansas look almost inviting. It was also Bogdanovich’s last film to have the benefit of Polly Platt’s impeccable production design work since they were divorced by the time it was released. Platt’s touch was definitely missed when he moved on to his adaptation of Henry James’s Daisy Miller the following year with his then-muse Cybill Shepherd in the leading role, but that, as they say, is a story for another time.

[Paper Moon and Targets will be screened at the IU Cinema on Saturday, March 15. Other double features in the “Hollywood Rebels: The Art and Legacy of Roger Corman” series include Francis Ford Coppola’s The Conversation and Corman’s The Terror (which Coppola worked on without credit) on Saturday, March 8, and Joe Dante’s Matinee and Piranha on Saturday, March 29.]