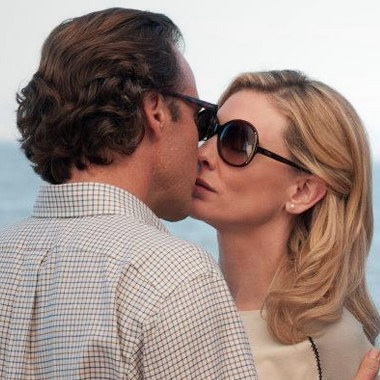 In Blue Jasmine, Woody Allen departs from his usual humor and instead delivers a portrayal of a socialite whose life collapses with the fall of her scheming Wall Street husband (Alec Baldwin). Having exhausted the last of her money, Jasmine (Cate Blanchett) arrives with upper-crust sensibilities and a medley of prescription drugs in San Francisco where she must “slum it” with her adopted sister Ginger (Sally Hawkins). The film cuts back and forth between Jasmine’s idealized past and imperfect present, in which both she and Ginger struggle with life and romance.

Cate Blanchett is phenomenal as Jasmine, an atypical Woody Allen protagonist. The comical neuroses that seem to plague most of Allen’s characters are replaced in Jasmine with severe mental illness and denial. Blanchett is convincingly afflicted, her whole being radiating a sense of instability. Blanchett’s performance leaves little room for relief, though, as Jasmine’s perspective becomes an increasingly uncomfortable headspace for the audience to inhabit. Even flashbacks to less psychologically volatile times are painful to watch, with the old, moneyed Jasmine being incapable of interacting with her sister across economic and social barriers.

Cate Blanchett & Woody Allen On The Set Of “Blue Jasmine”

In the few scenes when the perspective shifts away from Jasmine, the audience sees Ginger with various men, including an ex-husband (Andrew Dice Clay), a hot-blooded fiancé (Bobby Cannavale), and a dodgy lover (Louis C.K.). None of these men live up to Jasmine’s warped standards of class, leading one to believe that only sleazy men and troubled women populate this film’s world. Few of the characters are likable; even Jasmine—so incredibly portrayed by Blanchett—is at best watchable.

The characters simply cannot grow in this film centered around self-destruction and resignation. Allen seems so set on making the audience realize the cyclic nature of relationships and life choices, that real development is curtailed or pointless. The film lacks humor and hope, but in the end it might be worth watching merely to see characters played by fantastic actors stumbling around and making an absolute muck of their lives.

As the third theatrically released movie in the series, Riddick is by far the least nuanced. It exists only to perpetuate, rather than develop, its title character. The premise even seems like a poor amalgamation of the earlier films, with the monsters from Pitch Black and the bounty hunters from Chronicles of Riddick. Now stranded on a hostile planet, Riddick (Vin Diesel), an escaped convict, triggers an emergency beacon to lure bounty hunters to the surface so that he might steal their spacecraft.

Two groups of bounty hunters respond, and it becomes quite clear in the course of a few minutes of inane dialogue, that none of these characters is going to be compelling or dynamic. Santana (Jordi Molla) an incompetent loudmouth leads one, and Johns (Matt Nable), well-equipped and straitlaced, commands the other. While they are disappointingly unoriginal, the true travesty of character comes with Dahl, played by Katee Sackoff. The only female character in the film, she is reduced to her sexuality in the most stereotypical way possible. She can throw some punches and shoot big guns, so of course Dahl has to be a butch lesbian, who doesn’t sleep with men but rather slaughters them. That doesn’t stop any man, though, including Riddick, from aggressively propositioning her. Riddick through his obvious and superior display of virile ability is able to “turn” her, so that in the final scenes Dahl (backlit like a feminine angel) straddles him and promises to fulfill his masculine desires. The characters, specifically Dahl, and the scenarios within the film seem to exist only to make Riddick into a hyper-masculine ideal. He is well nigh indestructible (e.g. he cauterizes a giant hole in his chest and climbs a rocky cliff) and has a predator intelligence that all of his pursuers lack. He can tame wild beasts, build up immunity to venom, and set his own shattered leg, all of which he can do with no more than a grimace. In previous movies, his abilities were at least tempered with vulnerabilities, like feeling guilt and responsibility for the well-being of another human. In this film, his only connection is to an alien dog.

Riddick is not clever or original even within its own series. It is reduced to the barest of stereotypical frameworks, but at the same time, there is still the occasional thrill that comes with the foreknowledge of destruction at the hands of an indomitable fighter.

There’s this point in Elysium, after learning about main character Max DeCosta’s childhood (orphan, raised with Spanish-speaking children, by Spanish-speaking nuns, in a Spanish-speaking community) where adult Max is walking to work in apparently the same neighborhood and you wonder: Why the hell doesn’t this guy speak Spanish? Why not even an accent? He was speaking fluent Spanish like…five minutes ago. What just happened? On Elysium In “Elysium”

If you’re like me, you probably realize the obvious answer: it’s because that’s not Max! That’s Matt Damon, playing the character of Max DeCosta in Neill Blomkamp’s follow-up to District 9. Sadly, neither this explanation nor any other you come up with is likely to overcome the disappointment and boredom you’ll feel if, like me, you sit through the whole thing, barely able to keep from wondering whether Grown Ups 2 has shown that car wash scene yet. Regardless of whether you’ve seen it or not, what follows is a brief summary, followed by a far from exhaustive list of all the dumb stuff Elysium does.

Elysium takes its name from a ring-shaped satellite that, in the future, is populated by the super-rich and orbits around a wasteland called “Earth.” The people on Elysium are greedy, mostly white, have awesome tanning-bed machines that heal them, and throw fancy parties. That’s about it. Oh, and they also hate the poor  people from Earth (all minorities) who fly spaceships into the big open area on the side of Elysium that looks either glass encased or like a vacuum deathtrap, but turns out to be an artificial atmosphere.

Meanwhile, back on Earth, the poor people get harassed by robots and work various menial jobs for companies owned by people on Elysium. It’s a lot like America, actually, or the way that a myopic and liberal writer might conceive it. Max DeCosta (technically Matt Damon as Max) happens to be one of those workers. He’s a lifelong thief who, after a stint in jail, has given up his life of crime to work a really crappy factory job for no discernible reason.

That is, until Max gets totally screwed over by his boss and gets radiation poisoning. The only hope for Max comes by way of Spider, a sort of thug boss who agrees to help Max get to Elysium and use the healing bed thingy if Max helps Spider catch somebody really rich.

Long story short, Max goes through with it, a bunch of talking and strangely Call of Duty-inspired fight scenes ensue and, at the end, Max realizes that he’s going to die and that his only option is to sacrifice himself so everyone on Earth will be granted citizen status on Elysium.

It’s a really great thing for somebody to do, no doubt. But by the end of the movie, we’re bound to have more questions than answers, the biggest of which is, if it’s as easy as sending a bunch of spaceships down to Earth to help people, why didn’t the rich people do that way sooner?

Of course they couldn’t, because these rich people aren’t people at all. They aren’t even actors playing rich people! They are one thing only: “bad guys.” No one on Elysium shows the slightest hint of concern for the people on Earth, whereas the people on Earth—even thug bosses like Spider—end up turning out to be considerate (albeit sassy) human beings.

This is a problem, mainly because Blomkamp’s goal for Elysium has nothing to do with being conceptually inventive or action-packed. His real goal is to make us think. But it fails, primarily because it adopts the divisionary close-mindedness it intends  to critique. Rather than treating its enemies like valid and identifiably human humans (the way it treats the poor), it treats them like heartless Scrooges. At no point do we wonder what Max’s boss is like, his hopes and dreams, whether he’s ever lost someone he loved. The same goes for megalomaniacal Secretary of Defense Jessica Delacourt (Jodie Foster). Thoughts about who they are as people never cross our mind; they are defined and doomed by their affluence.

So what do we do? If—as Blomkamp recently claimed in an interview—greed is hardwired into our DNA, then what? Blomkamp’s explicit answer is “change the human genome.” Easy enough.

Another answer is that the rich could share the wealth. But in no way is Elysium an appeal to those it demonizes. Who, watching Elysium, is going to say, “Hey, that rich jerkwad reminds me of me!” No one will, not because we aren’t jerkwads now and then, but because the jerkwads in Elysium are nothing but.

You can’t show people (whether they are the rich or Republicans or Hipsters) anything if your starting premise is that they are ignorant, crude caricatures of real humanity. Real dialogue requires dialogue, not demonizing. Blumkamp did it in District 9, when he took a bumbling, self-centered jerkwad and put him through the ringer. By the end of the movie, Wikus is us. We’ve come to identify with him through his torturous ordeal. He’s still the same person, thinking only of himself, but he’s a jerkwad who recognizes it. Wikus’s nearly final statement, as he sacrifices himself not for all of humanity but for an alien father and son, is a sincere recognition of this inner division: “Go now, before I change my mind.” But it is the complexity of Wikus that makes it possible for us to identify and in some ways change with him.

But this isn’t Blomkamp’s plan for Elysium. The answer it offers? Human sacrifice. Matt—er, Max—sacrifices himself for the greater good. But this is equally false, not because heroes don’t exist, but because the situations that we face  are more complex than a movie like Elysium can possibly imagine. Max’s death allows a computer code to be overwritten, allowing all of humanity to be granted citizenship in Elysium. But here, in the real world, there is no computer code that can be overwritten. There is no quick fix. It takes more than one person to save us. The real answer lies in dealing with each other, with our selfishness and selflessness.

So why can’t someone on Elysium feel for someone on Earth? Or vice versa? There is no reason. The paradox of living is that we do so for ourselves and for others, and the beautiful thing about art is that when we are least selfless, it can change us, can make us feel linked with other people. One of the times when this can happen is when our art captures the complexity of the human experience. But Elysium fails to change us, to even make us think, because it embraces a separatist mindset, because it depicts the real battle as one between “us” and “them,” rather than what it actually is: a single body, confused, and fighting itself over what is wrong and how to make it right.