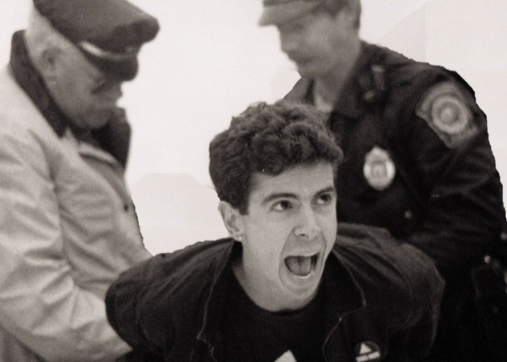 There’s a moment in How To Survive a Plague, David France’s documentary account of the earliest and darkest days of the AIDS epidemic, when ten thousand men and women march on the nation’s capital, carrying the remains of their loved ones lost to the virus. Officers on horses resisting the crowd, protesters on the frontline form against the White House fence, tossing the ashes forward in unison on the front lawn. A man weeps as he repeats, “I love you Mike.”

Heartbreaking moments such as this appear throughout France’s film, comprised of mostly archival footage, news clips, and home movies. In the decade the documentary chronicles, from 1986 to 1996, the epidemic claimed over 8 million lives worldwide, and yet the film voices a story of profound optimism.

How To Survive a Plague follows the history of the New York-based advocacy group “AIDS Coalition to Unleash Power,” more commonly known as Act Up. The organization came into the national spotlight with its inventive and effective media presence, civil disobedience, and its slogan “Silence = Death.”

Realizing that changing culture was not enough to address the lack of government attention towards AIDS funding, Act Up and TAG activists became engaged participants of the FDA’s drug-approval process. As result of this self-education, Act Up’s involvement directly resulted in the emergence of antiretroviral drug treatment, which has saved nearly six million lives since, yet is still unaffordable to many today. France paces his film quickly, highlighting Act Up’s successes and failures, meanwhile foregrounding the humanity of the passionate men and women who led the movement, who recognized the historic importance of their work as well as the likelihood of their own deaths. The film highlights the effects of the deaths, shaking the internal politics of the organization itself as well as addressing the guilt felt by those who survive today.

In many ways the film acts as a convincing endorsement for grassroots efforts and physical presence as a means of producing immediate social change, specifically relevant upon its release in late 2012, surrounding the Tea Party and Occupy Wall Street movements.

As the documentary advocates for organized collaborative efforts, it is of little surprise that the film’s credits recognize 30 archival cinematographers by name, several of which noted as deceased. With such in mind the film memorializes the movement as much as it does the bravery of its leaders.

Though France works foremost as a print journalist covering LGBT-related issues, his directorial debut was awarded several accolades, including best documentary at the 2012 Gotham Independent Film Awards and Boston Society of Film Critics, as well as a nomination for best documentary in the 2012 Academy Awards. David France was nominated for a Director’s Guild Award and Grand Jury Prize at the Sundance Film Festival. The film currently has a 100% fresh rating on the film aggregate website Rotten Tomatoes.

During one of the film’s protest funerals, Act Up leader Bob Rafsky says to a crowd, “When the living can no longer speak, the dead may speak for them. Mark’s voice is here with us, as is the voice of Perecles, who two millennia ago mourned the Athenian soldiers, who didn’t have to die, and in whose death he was complicit, but who had the nobility to say that their memorial was the whole Earth.” The film is dedicated to David Gould, France’s lover who in 1992 died to AIDS-related pneumonia.

How To Survive a Plague is a story of movement in the face of blockage, optimism in the wake of loss, voiced through the mouthpiece of those who led a social movement that saved millions of lives, but who are not yet finished fighting.

Director David France will be present for Indiana University’s 35mm screening of How To Survive A Plague on Wednesday, November 20 at 7:00pm in the Whittenberger Auditorium located in the Indiana Memorial Union. Following the documentary, Mr. France will discuss the film and accept questions from the audience.

The event is presented as part of the Union Board Film Series, in partnership with Sexploration Week, Indiana University’s Gay, Lesbian, Bisexual, Transgender Alumni Association, and Positive Link (a program of IU Health). The free, non-ticketed event will be open to the public. For more information visit the Union Board website or Union Board Films on Facebook.

[Brandon Walsh is the director of the Union Board Film Series, an undergraduate senior studying in the Communication & Culture and Telecommunications departments.]